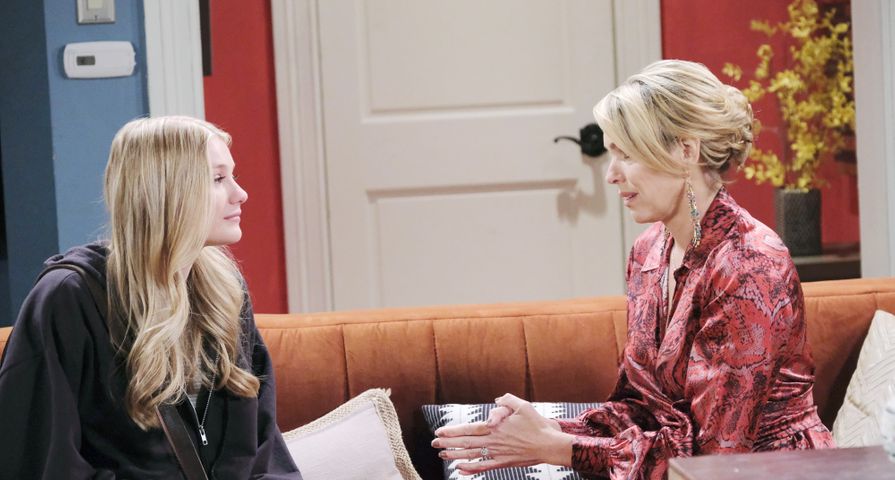 It was a dramatic week on The Young and the Restless, Days of Our Lives, General Hospital and The Bold and the Beautiful! Find out what you missed with your spoilers recap for June 15 to June 19, 2020:

Monday on Y&R, Nick and Sharon walked down the aisle despite Nikki’s objections. Meanwhile, Cricket was torn between Paul and Danny (Michael Damian), and Katherine encouraged Dina to pursue John. The episode originally aired on February 19, 1996.

Julie was stunned when she saw Jake for the first time on Monday’s episode of DOOL while Sarah suggested to Brady they take their revenge a step further. Also, Claire insisted to Ciara she wanted to make amends, and Ben asked Will to be his best man.

GH’s Monday episode originally aired on February 7, 2007. In the episode, Sonny and Carly re-declared their love during the Metro Court hostage crisis.

On B&B on Monday, upon learning that Sheila (Kimberlin Brown) was alive, Lauren (Tracey Bregman) persuaded her husband Scott Grainger (Peter Barton) to vacation with her on the romantic island of Santa Catalina, where Sheila went to repair her marriage with Eric. Lauren silently vowed to confront Sheila about her misdeeds in front of Eric and Scott. Ridge (then played by Ronn Moss) antagonized Connor (Scott Thompson Baker) before surprising Brooke with an impromptu fashion show of the men’s line they were about to debut. This episode originally aired on November 3, 1999.

Tuesday on Y&R, Cricket and Danny traveled to Hawaii to get married. In addition, Nikki kept a secret from Victor. This episode originally aired on November 16, 1990.

A kidnapped Gabi feared her time was running out on Tuesday’s episode while Eli and Lani demanded the truth from Jake. Also, John and Marlena realized Claire tricked them, and Claire provided key information to Ben and Ciara.

GH’s Tuesday episode originally aired on September 24, 2013. In the episode, Sonny went off his meds and began to spiral while Carly convinced him to resume taking the lithium.

Brooke used Victor Newman (Eric Braeden) to make Ridge jealous during a business dinner. Taylor attempted to take her husband Ridge’s attention off of Brooke and Victor to no avail. At his wit’s end after seeing Victor kiss Brooke, Ridge rushed to their table and demanded that Victor immediately return to Genoa City. As Victor and Ridge faced-off, an embarrassed Taylor intervened while Brooke gloated at the success of her plan. The episode originally aired on January 29, 1999.

Ben and Marlena went to Bayview in search of Gwen on Wednesday’s episode while Ciara came up with a plan to help Jake. Also, Gabi tried to escape, and Jennifer and Jack set aside their worries for a night to share a romantic dinner.

GH’s Wednesday episode originally aired on September 14, 2015. Fans saw Sonny in critical condition after being shot, with Carly sitting vigil in the hospital chapel, reading the vows he wrote for her, and remembering their ups and downs.

On Wednesday on B&B, Kay Chancellor (the late Jeanne Cooper) arrived in Los Angeles and gave important news about the “Stephanie Douglas Trust” that rocked Stephanie’s world. Having manipulated a divorce from Stephanie to be with Brooke, Eric was stunned to learn that the Trust was not in the company safe where he and his longtime lawyer Jonathan (the late Joseph Campanella) had kept it. Nick (Jack Wagner) demanded the truth from Brooke about her marriage to Eric. The episode originally aired on November 1, 2005.

John and Marlena reacted to Claire’s surprise guest on Thursday’s episode while Eli and Lani worked together to try to track down Gabi. Also, Xander made a heartfelt gesture to make things right with Sarah, and Jake and Ben’s plan went awry as they tried to negotiate Gabi’s release.

GH’s Thursday episode originally aired on October 14, 2015. In the episode, Sonny and Carly were married in the GH chapel.

On B&B on Thursday, Jack Abbott (Peter Bergman) accepted the Forrester family’s invitation to meet them at their office to discuss a new business proposition. To Brooke’s annoyance, Ridge anxiously moved through the meeting worried that he would not be able to keep his promise to Taylor to attend the party that Dr. Pierce Peterson (Paul Satterfield, Jr.) was throwing in her honor. As Eric, Ridge, Brooke, and Thorne (Winsor Harmon) proposed a Jabot and Forrester collaboration to Jack, Sally and Darla (Schae Harrison) crashed the gala and saw Macy (Bobbie Eakes). Separately, Stephanie convinced Dr. James Warrick (Ian Buchannan) to crash the party with her as she was convinced that Pierce had romantic intentions towards her daughter-in-law, Taylor. The episode originally aired on December 24, 1998.

Nicole questioned Allie about her baby’s father on Friday’s episode while Gwen and Jake had a tense reunion. Also, Gabi took action to prove Jake was Stefan, and Kate took her frustrations out on Hope.

Brooke turned to Nick to complain that Ridge had become engaged to Ashley Abbott when Ridge should be with her. Nick, now married to Taylor (Tylo), attempted to have Brooke see that she should move on with her life. Rick (then played by Kyle Lowder) unsuccessfully flirted with his ex, Ashley, while telling her to watch out for his mother Brooke in regards to Ridge. Unswayed by Nick’s words, Brooke confronted Ashley and warned her that Ridge would always return to her, that they are destined to be together. The episode originally aired on September 26, 2007.