14 Things You Didn’t Know About ‘Girls’ 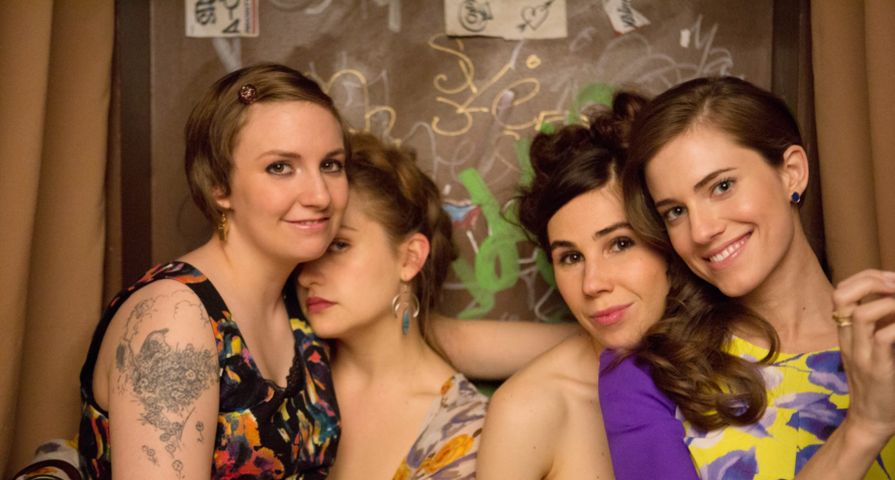 HBO’s Girls was created by Lena Dunham who also stars, writes, and produces the show. It follows the lives of four friends who are in their 20s, as they try to get their careers and love lives on track while living in New York City. The show is inspired by Dunham’s experiences making it as a writer in the big apple. Girls is going to be entering into its sixth and finale season soon and audiences can’t wait for the next adventures of Hannah Horvath and her gal pals. Here are 14 things you didn’t know about the show!

Jemima Kirke’s (Jessa) real passion is art and she has a successful career as a visual artist. She also has a Bachelor of Fine Arts degree in painting from the Rhode Island School of Design. Lena Dunham (Hannah) persuaded her to take up acting as well and the two actresses have been friends since attending Saint Ann’s School in New York.  They have also appeared together in Tiny Furniture (2010). Co-star Alex Karpovsky (Ray) was also in the film as Dunham’s love interest.

13. Talented Enough To Be A Regular

Zosia Mamet’s character Shoshanna was only supposed to be featured in a few episodes, but Lena Dunham was so impressed with Mamet’s acting, she made her a Girls regular.

In real life, creator, writer and star of Girls Lena Dunham is best friends with spokesperson for politician Scott Stringer, Audrey Gelman. Gelman was also Hillary Clinton’s former press aide. The character Marnie and her relationship with Hannah is actually based on Dunham’s friendship with Gelman. Gelman has also appeared on Girls as Audrey.

Not to be left out, Zosia Mamet (Shoshanna) is the daughter of David Mamet, a well-known director, playwright, and screenwriter. His films Wag The Dog (1997) and The Verdict (1982) were nominated for Oscars. Zosia’s mother is actress Lindsay Crouse who appeared in Verdict and was nominated for an Oscar for her performance in Places in the Heart (1984).

Jemima Kirke’s (Jessa) parents are also celebrities in their own right. Her mom, Lorraine Kirke, is a talented fashion designer and her father is Simon Kirke, a well-known rock musician who was the drummer for Free and Bad Company. Lorraine’s boutique Geminola provided many of the costumes for Sex and the City.

Lena Dunham’s (Hannah) famous parents are photographers Laurie Simmons and Carroll Dunham. Simmons played Dunham’s mom in the movie Tiny Furniture (2010), which was also written by Dunham. Simmons portrayed a photographer who shoots tiny furniture, which is similar to her work in real life. In addition, Dunham’s sister, Grace Dunham, played Lena’s sister in the film.

Allison Williams’ (Marnie) dad Brian Williams is a famous Emmy newscaster who was a famous NBC news anchor before a scandal in which he lied about his own experiences in the Middle East while on location for reporting. The National Fathers’ Day Committee named him Father of the Year in 1996. He frequently is on the Girls set to watch his daughter act. Hopefully he is absent during some of the more risqué scenes.

After the first season of Girls, writer and creator Lena Dunham received a lot of heat about her all white cast. She therefore created the character Sandy for Donald Glover in season two. He appears as Dunham’s love interest for two episodes in 2013.

At the end of season two, it appears that Marnie (Allison Williams) and Charlie (Christopher Abbott) are back together, but in the premiere of season three, they apparently broke it off again. There were rumors that Abbott left the show because he no longer wanted to work with Dunham, but told Glamour Magazine in 2013 that he just could not relate to his character Charlie.

Adam Douglas Driver (Adam) has quite the resume. He is a Juilliard graduate and served as a marine in Afghanistan for two years. He was later discharged for medical reasons. Currently, he operates Arts in the Armed Forces, a non-profit that gives performances for the military.

4. Hello, My Name is Elder Price

Andrew Rannells (Elijah) is a Broadway star and his first Broadway role was Link in Hairspray (2006). He is best known for playing Elder Price in The Book of Mormon (2011). He received a Tony nomination for that performance and also won a Grammy for Best Musical Theater Album.

3. The Many Wives of Hannah’s Dad

On Girls, Peter Scolari plays Tad Horvath, Hannah’s (Lena Dunham) devoted father who has been married to Loreen Horvath (Becky Ann Baker) for many years. Off screen, Scolari has been divorced three times and married four times. His longest marriage was 10 years and his shortest was two.

Before playing Marnie on Girls, Allison Williams portrayed Kate Middleton on the skit series Will and Kate: Before Happily Ever (2011). Her co-star was British actor Oliver Jackson-Olsen who played Prince Will. Williams wrote the episodes after constantly being told she looked like Princess Kate.

In addition to writing, directing, and starring in her own HBO TV series, Lena Dunham also wrote a memoir at the age of 28 called Not That Kind of Girl. Random House entered into a bidding war to publish the book for 3.5 million. It has been ranked number two on The New York Times Best Seller List.