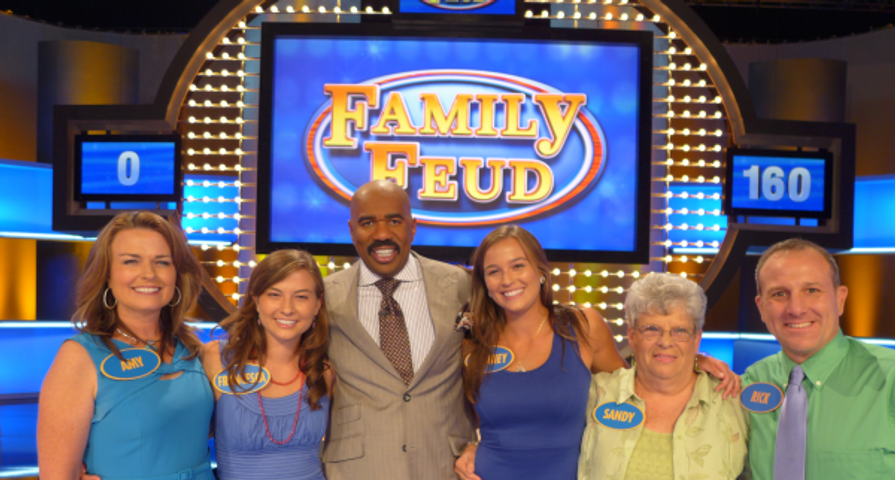 Family Feud has been through many formats and syndication styles since it first aired back in July 1976, and remains one of the most popular American game shows on TV. Through the years some things have changed but at the heart is a hilarious, sometimes extremely difficult and always competitive game show pitting two families against each other. In its first year on air, Family Feud became the top game show on television and in 2013 the beloved show was ranked third on TV Guide’s list of the 60 Greatest Games Shows of All Time! Take a look behind the scenes with these 10 things you never knew about Family Feud:

As Family Feud fans are well aware, each round starts off with two family members facing off against each other at the podiums in a race to be the first to hit the buzzer and have the most correct answer. A few times, however, this process hasn’t gone smoothly and the entire question has had to be scrapped. If a question is asked and neither contestant gets an answer on the board, the question is eliminated and the two players are sent back to their original positions in their family line-up and brought back up as though the question had never happened.

Family Feud premiered for the very first time on July 12, 1976 and instantly became a hit. The series ran for nine years before the plug was pulled and the last episode aired in June, 1985. Luckily for fans, only a few years later CBS took over the show and relaunched it in 1988 and it had another fantastic run before coming to an end in 1993. Yet again, Family Feud could not be given up on and the current edition of the series began airing in 1999 and is the version fans know and love today.

In January 2010, fans will remember the big news was announced that comedian and actor Steve Harvey would be taking over as host of Family Feud from John O’Hurley in season 12, but that wasn’t the only big change. Upon hiring Harvey for the role, they then had to move the entire production of the show from Sunset Bronson Studios in L.A. to Universal Studios in Orlando, Florida, to make it easier for Harvey who lives in Atlanta and was doing a morning radio show there. It didn’t take long for the arrangements to change again when in 2011 the whole thing was moved to Atlanta at Harvey’s request.

As with any popular series or game show, fans would love to know what it is actually like to be on the set and play the game, and luckily a few former Family Feud contestants have shared their stories and spilled some behind the scenes secrets. In 2014, Cole Simmons did a Reddit “Ask Me Anything” segment after his family competed on Family Feud and won $22, 000. Many wondered what the process was like when it comes to collecting your winnings, and Simmons revealed, “You don’t get your winnings until 90 days after the show airs. It is automatically divided five ways. It will be subject to income tax…If you get the car, they just you a car and you figure it out. If you take the cash equivalent, that is divided.”

As well as opening up about what contestants get paid after winning on Family Feud, Simmons also made some other interesting revelations about the show. Longtime viewers of the series may have noticed that very often Family Feud features a white family competing against a black family, and it turns out that is done on purpose. “I always had a theory that they did that, and it turns out I was right. They do black vs. white families whenever they can. Our fourth episode was white vs. white because they had flown that family in from either Oregon or Washington and didn’t want to pay to keep them another night.” He added that he thought families were picked to compete that way in order “to appeal to a wider audience.”

Before anything can be filmed to go on television, a rehearsal is necessary in order to make sure everyone understands how things happen and that all the lights and equipment are working properly. Most interesting, however, is that a “stand-in Steve Harvey” is used and Harvey does not come out until the actual taping. It is true thought that everything is unscripted and all of the funniest moments and Harvey’s jokes happen on the fly and are not planned.

In the fall of 1997, things changed for Family Feud again when Pearson Television bought the rights to the show in hopes of bringing it back after the series had been off the air since 1993. In 1998, a search for the perfect host began and at first Dolly Parton was their number one choice but, when she could not take the role, Louie Anderson was selected. When Pearson demanded later that year that Anderson had to film a Family Feud pilot, Anderson refused and instead filmed himself and his family playing the game. The response to Anderson’s segment was so good that it ended up being what sold the show and convinced the network to bring it back and also landed Anderson a $1.5 million pay day for hosting.

The filming of Family Feud has a lot more to it than what fans see on TV. Several families are brought in each day and they do not know until moments before that they have been chosen to play, which means families can wait all day for their turn and never get to play, meaning they have to come back the next day. When you do film, all four episodes featuring your family are shot in the same day and four to six episodes are filmed per day. Simmons revealed that on the day his family played, they got breakfast, Subway subs for lunch, and then a break and snack, which he says was a granola bar, after filming the third game while Steve Harvey ate his dinner.