10 Things You Didn’t Know About ‘The Beverly Hillbillies’ 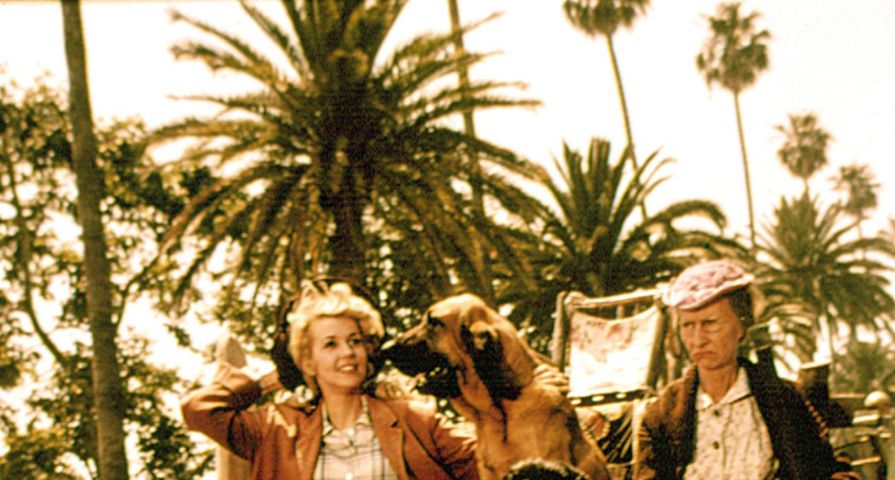 The Beverly Hillbillies is one of the most iconic television shows. Airing from 1962 to 1971, the show had an ensemble cast that featured Buddy Ebsen, Irene Ryan, Donna Douglas, and Max Baer Jr. as a poor backwoods family from the south that moves to Beverly Hills, California, after striking oil on their property. The show was quite successful, winning seven Emmy Awards and spawning a feature film of the same name in 1993. Since the show was so popular for all its nine seasons, here are 10 things you didn’t know about The Beverly Hillbillies:

The show was filmed at Arnold Kirkeby’s mansion in Bel Air. An agreement was made between Filmways Productions and Kirkeby, which enabled the show to film the exterior of his mansion, but the agreement stipulated that the address of the estate was never to be divulged to the public. During the show’s fourth season, Kirkeby’s wife reportedly broke the agreement when the address was leaked and an endless stream of tourists descended upon the mansion looking for the cast. After that, Filmways was prohibited from filming the mansion’s exterior or any long shots on the mansion grounds.

Raymond Bailey – who played the greedy banker president Milburn Drysdale – was starting to suffer the effects of Alzheimer’s disease when the show was nearing the end of its run, and in some of the final scenes, it’s clear that he wasn’t healthy. After 1975, Bailey was no longer able to work and spent his final years going between his condo and his houseboat in Laguna Niguel, California. The only cast member he kept in touch with was Nancy Kulp, who he nicknamed Slim.

The Beverly Hillbillies was not a winner with critics and the show consistently received poor reviews. One of the things that really bothered critics was how unfunny the show was. In spite of this, the show managed to shoot to the top of the Nielsen ratings shortly after it premiered and it stayed there for several seasons. During the first two seasons, it was the #1 top rated show in the country and season two had some of the highest ratings ever recorded for a half hour sitcom.

Although Donna Douglas was active as an actress throughout the 1960s, she was still relatively unknown when she was selected from a group of 500 actresses to play Elly May Clampett on The Beverly Hillbillies. Like Elly May, Doulgas had grown up poor in rural Louisiana, so when she was asked during her audition to milk a goat, she knew what to do because she had milked cows before.

The show was cancelled in 1971 because CBS’s advertisers were interested in targeting a more sophisticated urban audience, so the network cancelled all of its rural-themed comedies. Petticoat Junction was the first to go in 1970, and the following year Green Acres and The Beverly Hillbillies were cancelled. All of the shows had still been popular with viewers when they were cancelled and they were still drawing in decent ratings; however, they weren’t popular with the younger urban demographic that advertisers wanted.

When Irene Ryan auditioned for the role of Daisy May, show creator and producer Paul Henning had already decided to cast Bea Benaderet in the role. This changed when Ryan read for the part “with her hair tied back in a bun and feisty as all get-out.” Everyone was blown away and executive producer Al Simon and Henning immediately said, “That’s Granny.” There were no hard feelings on Benaderet’s part. When she saw Ryan’s audition, she agreed and she went on to play Jed Clampett’s cousin, Pearl Bodine, on the show.

Buddy Ebsen was the first to be cast on the show. According to show creator and producer Paul Henning, he had seen Ebsen in the movie Breakfast at Tiffany’s and couldn’t imagine anyone else playing Jed Clampett. Before landing the role, Ebsen had seriously considered retiring from show business permanently.

Not all was harmonious between some of the cast members. Buddy Ebsen – who played Jed Clampett – and Nancy Kulp – who played Miss Jane Hathaway – frequently clashed over their political views. Ebsen was more conservative while Kulp was more liberal and they would often argue for weeks at a time. Things came to a head years later when Kulp unsuccessfully ran for the U.S. House of Representatives as a Democrat from Pennsylvania. Ebsen supported her Republican opponent, Bud Shuster, and went so far as to tape an ad for him. He also claimed that Kulp was exploiting her celebrity status by running and didn’t actually know what the real issues were.

Creator Paul Henning got the idea for the show while traveling through civil war sites with his mother-in-law. He wondered what it would be like to take a person from the rural south during the Civil War era and put them in modern community and see how they respond. Originally, the show was going to set in New York, but due to financial issues, it was changed to Beverly Hills.