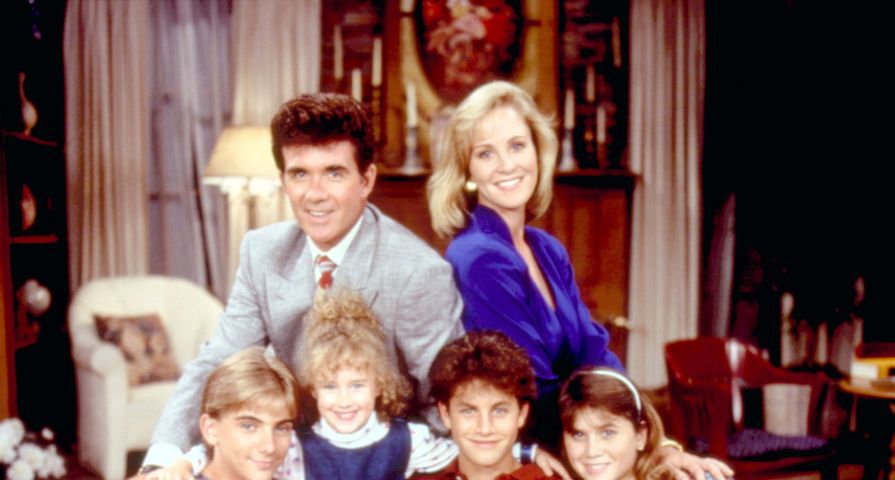 Growing Pains was the epitome of a family-friendly sitcom. The series first aired back in 1985 and continued on for seven seasons into 1992. Growing Pains was the launching pad for actors like Kirk Cameron, Joanna Kerns, Tracey Gold, Alan Thicke and even Leonardo DiCaprio! It’s been 25 years since the series ended, so here’s a look back at 10 things you didn’t know about the series!

When Growing Pains first started and lead actors Joanna Kerns and Alan Thicke were cast as married couple, Maggie and Jason Seaver, they were both divorcing or recently divorced from their significant other. After working closely together they naturally formed a relationship and would often flirt with one another on set. According to Thicke, they both toyed with the idea of dating off-screen, but ultimately decided it would be a disaster for their working relationship if it didn’t work out. “We made the very intelligent decision that the show might last longer than a relationship would,” said Thicke.

Many cast members of long-time shows develop their own quirks and rituals, sometimes individually or as a team, and Growing Pains was no different! According to Alan Thicke, before filming a scene the cast members would all chew gum and “as you make your way onto the scene, you would stick your gum on this ever-growing wad. It ended up weighing about 11 pounds,” he said. When the show ended everyone wanted to take a souvenir. He took some scripts, but others were fighting over the big wad of gum! Yuck!

8. Family Members Were Used as Extras

One of the perks of having a dad who stars on an American sitcom is hanging out on set and sometimes even getting 15 minutes of fame on camera! “If you watch real closely in some episodes, you’ll see my son Robin at about the age of 11 and 12 participating as an extra in a classroom scene or at a party that Mike Seaver was throwing. My son Brennan was also in some episodes. He was the voice of the ‘Dennis the Menace’ cartoon in the 80’s,” said Thicke. “It was a fun place for my kids to show up after school and hang with the cast.”

7. Why Kirk Cameron Got His Role

When Kirk Cameron auditioned for the role of Mike Seaver he was only 14-years-old! According to the book A Full House of Growing Pains: A Hollywood Mother’s Journey, Cameron landed the role because the producers thought he wasn’t smart! The story goes, when his auditioned ended he asked one of the producers if the show was a comedy and they laughed. When he left the room, one of the producers turned to the other and said, “He’s not the sharpest knife in the drawer, but he sounds like Mike.”

It’s hard to imagine someone other than Tracey Gold playing the part of Carol Seaver, but in the original pilot, Elizabeth Ward had the part. Gold was called back last minute to re-audition for the role. “I auditioned for ‘Growing Pains‘ when the pilot was being shot and I didn’t get it…And then probably about two months later I heard that they were going to recast the part of Carol Seaver and they called and asked if I would come back in and read for it and I’m like, no, you already saw me and didn’t like me,” said Tracey Gold. “I finally ended up going back and…I eventually got it and I was really glad because I remember like reading about it in the paper and going, ‘That’s one I would have liked to have done.'”

Growing Pains was a stepping stone for many actors, even Oscar winning actors like Leonardo DiCaprio and Brad Pitt! Pitt had a guest role in an episode and at the age of 16, Leonardo played the role of Luke Brower, a homeless teen who’s taken in by the Seaver family. “They were young and upcoming at the time. Leo was particularly amusing and funny in ways the public hasn’t seen yet,” said Thicke. Because Leonardo was good friends with Tobey Maguire, he would also visit the set. “They were always on set, they always looked like they were in trouble or had been in trouble and were talking about it. [Leo] was just great fun. He could imitate you in way that was so disarming that it really felt comfortable,” said Joanna Kerns.

Kirk Cameron met his future wife when he went to visit his sister, Candace, on the set of Full House. The two reunited on the set of Growing Pains when Chelsea Noble landed a recurring role as Kate MacDonald, Mike’s love interest. Their relationship blossomed both on-screen and off, and in the 1992 series finale, Mike proposed to Kate which was about a year after Kirk and Chelsea wed in real life. They now have six children, four adopted and two biological.

3. Why Matthew Perry’s Character was Killed Off

Before he became one of the stars on Friends, Matthew Perry played a small role on Growing Pains. He played the character of Sandy, a brief love interest for Carol in season 4. His stint on the show was short lived as his character abruptly died in a car accident after drinking and driving. The executive producers said they made the decision to kill his character off as a way to warn their young audience about the dangers of drunk driving. It came from a personal experience after one of their teenage daughters was caught drinking.

Things You Might Not Know About 'Everybody Loves Raymond'

Behind the scenes, Tracey Gold was secretly suffering from anorexia and eventually had to be written off the show due to her poor health. Unfortunately, her character was frequently the butt of fat jokes and, over the course of seven seasons, she went from 133 pounds to 79. “I just saw her wasting away and she was getting foggy and she couldn’t remember her lines, and I just was afraid that it was much further than any of us imagined,” said Joanna Kerns. Gold has admitted that she doesn’t remember much from the last season, and even when she came back for the series finale, she was still very, very sick.

10 Things You Didn't Know About ‘The Beverly Hillbillies’

Julie McCullough was abruptly fired after playing Mike’s girlfriend, Julie Costellio, in season 4. It was reported in tabloid gossip magazines that she was written off the show because Kirk Cameron was bothered by the fact that she had posed in Playboy magazine, but he has vehemently denied this. Joanna Kerns said she watched Cameron grow more isolated from his cast members as he moved further into his Christian faith. According to executive producer Steve Marshall, Kirk was constantly demanding script changes and felt that many aspects of the show were too racy. At one point he went to the network and accused the three executive producers on the show of being pornographers when they wouldn’t adhere to his changes.