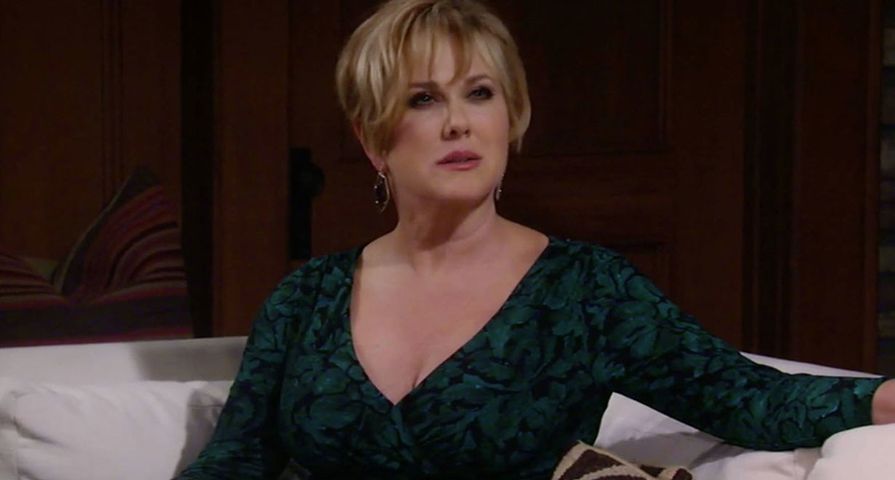 Television cliffhangers can be incredible and are one of the major reasons audiences keep tuning into their favorite shows week after week. Lucky for soap opera fans, Friday cliffhangers are almost a guaranteed weekly treat. At times they can get pretty outrageous despite how entertaining they may be. Below is a list of the 12 most insane cliffhangers in soap opera history.

12. Days Marlena Wakes Up On An Island Filled With Ghosts

Days of Our Lives (DOOL) fans may have thought it was all a dream in 2004 when Marlena awoke to find herself on an island surrounded by friends and family she believed were dead. Alas, it came to be the big reveal around the Melaswen Island story where fans thought all their favorite characters had been killed off by a serial killer, when Stefano DiMera was really just stashing them away on a secret island.

11. Y&R Characters Are Trapped Due To An Explosion

The “Out of Ashes” storyline that took place in 2007 was a crazy one. As the story goes, a resort and casino was being erected in a little town close to Genoa City, called Clear Springs. As luck would have it that day pretty much every prominent member of GC was in the area for one reason or another before disaster struck. The building collapsed, causing many to be trapped in the area. Soaps in general love a solid explosions cliffhanger and this left many Young and the Restless (Y&R) fans wondering which of their favorite characters may meet their demise after this storyline was said and done.

10. The Resurrection Of GH’s Olivia Jerome

General Hospital (GH) has been teasing for months now that there is a ‘new’ mobster in town, and this cliffhanger continues to shock fans everywhere. After over two decades, Olivia Jerome is back and wreaking havoc on all that have done her wrong in the past. We last saw this character shot dead by her brother Julian in 1990 … so let’s all let that sink in for a moment. Olivia’s face reveal recently was an insane shocker and a constant reminder that no one is ever truly dead in the land of daytime drama.

The idea that someone could devise and successfully roll out a plan to bury another person in a coffin is insane enough. The pure logistics of it all seem remarkable, not to mention the idea that at some point DOOL’s Carly Manning would need to go to the bathroom, and how did that coffin not wreak of crazy body odor? Regardless, Vivian Alamain did pull this scheming plot off in the early ‘90s, much to the horror of Days fans. While some fans may want to place the idea out of their minds, the image of Carly waking up to the voice of Viv in the background, realizing she was in a coffin will forever be etched in the memories of many.

Days of Our Lives News

Sweet young Cassie Newman died in 2005, much to the sadness of her friends and family … not to mention Y&R fans. So, it was a shocker to say the least when Cassie began popping up out of nowhere in 2014. She was no stranger to Genoa City as the character was known to return as a ghost, and the fact that mom Sharon was mentally unstable, perhaps her return was a hallucination. However, when the character was revealed to have an alliance with Victor Newman, fans knew that Cassie was real. What was this person up to? What was Victor up to? The cliffhanger was definitely one that rocked Genoa City and the show.

Some GH fans wish that Emily Quartermaine could come back from the dead too, but the sad reality is, this probably will never happen. In a horrific cliffhanger from 2007, Emily was strangled at a Halloween Party that was hosted by her finance Nikolas Cassadine. The scenes during this episode may have felt more like a horror flick than soap opera. The Cassadine mansion is creepy enough as it is without everyone dressed up in crazy costumes for the occasion. Nikolas had just proposed to Em, but he was also going through a phase of having blackouts and rage. Nikolas blackouts during the party. Jason is looking everywhere for sister Emily. There is a crazy rain storm brewing, and Anthony Zacchara is out on the loose. Before GH fans knew it, they were headed to the end of the episode and much to everyone’s shock, Emily lay in the middle of the floor, strangled and dead. This who dunnit had everyone pointing their fingers at the Greek prince, but fans knew there was more to this cliffhanger … and there was.

Rewinding through Salem’s history books, we have an insane cliffhanger from the late 1980s. After finally reuniting due to the fact that Roman was thought to be dead, super couple Marlena and Roman were back together. Seems like Roman got a piece of his own medicine when Marlena was turned into a goner shortly after they remarried. In 1987, after Marlena had been abducted, hero Roman followed her to save her and bring her back to Salem. Sadly, all his efforts would be wasted as he watched an airplane that she was on explode in front of his very eyes.

Any cliffhanger that involves children can be a hard thing to watch for viewers. Such was the case in 2015, when a Halloween Gala that took place at the Newman Towers (dedicated to the Delia Project foundation) went seriously wrong. There were many kids at the event, parading around in their costumes and having a good time. Sadly, a fire that caused an explosion resulted in chaos within the building. Main characters and their children rushed for safety and many viewers wondered if the storyline meant they would have to say ‘goodbye’ to another beloved Y&R character.

Interestingly enough, DOOL’s Sami Brady has done a lot of terrible things over her life in Salem, most of which have gone unpunished. Sadly, the only time Sami did do jail time was in the early 2000s and it was for a crime she did not commit. Then-fiancé Franco Kelly ended up dead right before the two were supposed to walk down the aisle. Sami fainted at the sight of her dead beau and Kate devised a plan to frame her blonde nemesis. Sami was charged, jailed, and sentenced to death row. In a nail-biter of an episode, Sami was saved mere minutes before she was set to die at the hands of lethal injection.

After years of ups and downs, GH super couple Brenda and Sonny finally said ‘I do’ in 2011. They enjoyed an interesting struggle to make it to that wedding, but once the air was cleared the ceremony was beautiful and the reception was grand. It seemed like they were finally ready for their happily ever after. Sadly, as they were headed off for their honeymoon, Sonny allowed Brenda to get into the limo and the vehicle exploded right before his very eyes. Crazy wedding cliffhanger, right? Good news is Brenda was not dead. However, the bad news was the honeymoon would have to wait as she had been taken by the infamous Balkan.

Back in 2010, Adam and Sharon were a thing … a huge thing. Sharon was so smitten with Adam that nothing would stop her from clearing his name. Adam was on the wrap for his wife’s murder (Skye Lockhart), even though she was said to be alive. Since Adam was in custody, Sharon took off to Hawaii on her own to find Lockhart … and she did. She even snapped a photo of Skye to take back to Genoa City. The unfortunate thing was, as Skye tried to snag the evidence away from Sharon, she and the proof slipped and fell into a volcano (Sharon did try with all her might to save Skye). Terrible situation and terrible image for many Y&R fans. What would Sharon do with no proof and no Skye? She managed to get out of this sticky situation, but it did take a lot of time.

Jason Morgan continues to be one of the most prominent characters on GH today. So much so that back in 2012, fans were shocked when Sonny’s sidekick was shot and then thrown into the harbor. He had finally made amends to start a future with the love of life, Sam, and after the couple took a family photo with son Danny, Jason took off to run an errand. The errand took a shocking turn for the worse when Faison, dressed up as Duke Lavery, shot Stone Cold and then threw him in the water. Was Jason really dead? Was there any chance he could come back to Port Charles? Fans would have to wait years (literally) for some sort of resolutions around this incredible Friday GH cliffhanger.