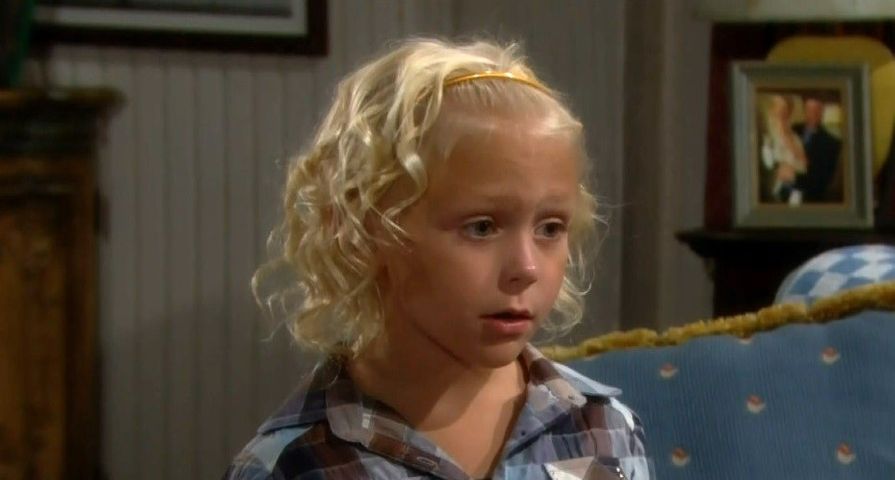 A pregnancy can be a life-changing moment for most women; however, in the land of soap operas, it can lead to a whole lot of trouble. At times, there is the age-old soap dilemma of paternity, and other times a pregnancy can lead to another popular daytime storyline: a baby switch. This often entails a horrible situation where our soap opera heroine is either given another baby, thinks her baby is dead, or at times, something even wackier can occur. Anything is possible in the land of daytime drama. Alas, here are the eight most scandalous soap opera baby switches.

8. Philip Kiriakis – Days of Our Lives

This baby switch storyline can be filed under the wacky category, and Days of Our Lives (DOOL) is known for its crazy storylines. In 1994, a younger Kate Roberts, infatuated by the power and influence of Victor Kiriakis, decided to marry the Greek tycoon and promised to give him an heir. Using in vitro fertilization, the couple believes they are on the road to parenthood. However, the always scheming Vivian Alamain, desperate for Victor’s affections as well, ended up taking the embryos and implanting them in her. Philip was born in February of 1995, and the truth eventually did come out, but not without Kate eventually losing Victor to Vivian. Not to mention stealing Kate’s own moment of giving birth to her own son.

7. Mariah Copeland – Young and the Restless

Not switched, so much as stolen, Young and the Restless’ (Y&R) Mariah Copeland ended up being the unknown twin of the deceased Cassie Newman. When a teenaged Sharon Newman (then known as Sharon Collins) gave birth to Cassie, she unknowingly also gave birth to Mariah. At that time, the nurse in the delivery room, Helen Copeland was part of a cult group led by the dastardly Ian Ward. She took the child, and raised her as her own, and under the influence of Ian. Years later, Mariah would be hired by Victor Newman to drive a whacked-out Sharon over the edge. In the end, it was revealed that Mariah was not a Cassie look-alike, rather, she was Sharon’s daughter and Cassie’s twin sister.

Danny Morgan was the center of much controversy in the land of Port Charles. First came the issue of who his biological father was: Franco or Jason. If the continually flip-flopped paternity problem didn’t keep viewers tuned in, being swapped for another infant on the day Danny was born, did. Sam Morgan gave birth to Danny in a cabin the summer of 2012 during a storm that prevented her from going to the hospital. Oddly enough, another child, Victor Lord III had also arrived during that crazy storm, and unfortunately died. Being at the wrong place at the wrong time, Todd Manning and Heather Webber switched the babies, and gave little Danny to Tea Delgado. Thanks to a genetic disorder, known as Mediterranean Anemia (which runs in Sam’s family), and some intuition and investigating on Jason’s part, Danny was eventually returned to his parents. Not without some kidnapping drama that escalated within General Hospital beforehand; however, Danny was finally returned.

Leave it to Days to come up with some outrageous storylines, and this one is no exception. While Teresa Donovan and Brady Black had hit a rocky patch in their relationship, Teresa was elated to find out she was pregnant with his child. Still, she took her time telling Brady about the pregnancy, trying to find a perfect opportunity. Unfortunately, Teresa took too long. Brady’s ex-girlfriend and daughter of the evil Stefano DiMera, Kristen caught wind of Teresa’s pregnancy and vowed to get even. Wanting to have a child with Brady herself, Kristen had Teresa kidnapped, drugged, and stole her embryo. With a sketchy doctor on hand, she then had him implant her with it. When Teresa eventually did tell Brady she was pregnant, the results came up negative, and made her seem like a liar. However, in the end, thanks to Melanie Jonas, the truth was revealed, and Tate was returned to Brady and Teresa.

This is really a two-part baby switch story for GH’s Lulu and Dante Falconeri. The poor couple struggled to get pregnant once they decided they wanted to take that next step, and become parents. BFF Maxi Jones decided help, and offered to become their surrogate. Unfortunately, Maxi miscarried the child during her first trimester. Not wanting to disappoint Lulu and Dante, she tried to re-implant herself with the couple’s remaining embryos but, as it turned out, she couldn’t…because she was already pregnant with Spinelli’s child, who was conceived on a one night stand on New Year’s Eve. Alas, Maxi decided to give her baby up, so that Lulu and Dante could be happy. Unfortunately the truth was revealed at the baby’s baptism, and all heck broke loose.

Now here comes part two! After they lose baby Georgie (then known as Connie) in a custody battle against Maxi and Spinelli, Lulu and Dante gather up the courage to try and have another baby…they had a bunch of embryos left anyways! Unfortunately, when they head back to the lab, it turned out that those embryos were missing. In the end, Dr. Britt Westbourne ended up implanting them in her, to convince her then-beau Dr. Patrick Drake that she was pregnant with his child. After a whole whack of lies from Britt, the truth was revealed that Rocco (then known as baby Ben) was indeed both Lulu and Dante’s baby boy … and the couple finally received the miracle baby they had dreamed about for years.

2. Sydney DiMera – Days of Our Lives

Back in late 2008, early 2009 Nicole Walker was infatuated with E.J. DiMera. While his heart always belonged to Sami, the couple found some happiness, which really stemmed from the excitement around Nicole’s impending pregnancy. Unfortunately, Nicole miscarried, but was able to come up with a brilliant plan to hold onto the family she had always dreamed of. Learning that Sami was pregnant with E.J. child, she wore a fake pregnancy belly during her third trimester, and struck up a plan with a pregnant teen to adopt her baby. However, Nicole didn’t want that baby, so she decided to switch it for Sami and E.J’s infant. The plan was executed flawlessly; however, the baby that Sami had, ended up dying from meningitis. Distraught, E.J. and Sami mourned over the death of their child, and it took them months to discover that their baby was alive and well, living in the DiMera mansion the entire time.

1. Faith Newman – Young and the Restless

On Cassie Newman’s death bed, she prophesied that Nick and Sharon would have another baby girl … and years later they did. However, it took months before Sharon and Nick realized that Faith Newman (who ironically never had to change her name after the entire ordeal) was their baby. The ever despicable Adam Newman caused a pregnant Ashley to miscarry. Thanks to Adam torturing Ashley with ghostly images of Victor’s ex, she was out of sorts and didn’t realize she had miscarried. In another, wrong-place-at-the-wrong-time situation, Sharon, who as a little off of her rocker as well, ended up in a psych ward when it was time to deliver Faith, and thought her baby died. Ironically Ashley was in the same ward as Sharon. Adam was there too, and was able to snatch Faith, convince Ash that she had given birth, and pass the baby on to her.