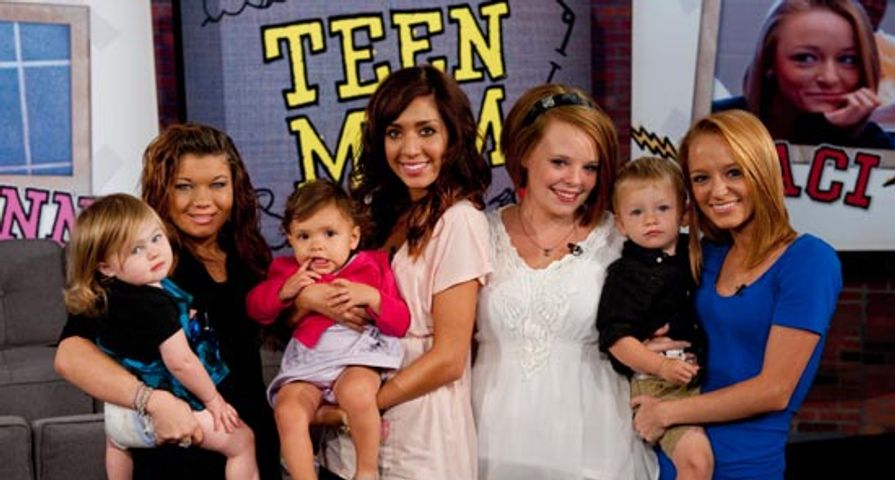 MTV has created a string of shows about teen pregnancy that have become widely successful. Along the way it’s no doubt these moms turned reality stars have met their fair share of bad press and suffered the cost of being under the microscope of public scrutiny — some more than others. But when it comes to reality television, it’s often meant to be taken with a grain of salt, which makes us wonder: How real are these stories? What is fake and what isn’t and who are these people when the cameras aren’t rolling? Here are some of the best kept secrets about the Teen Mom stars every fan should know:

After season two of Teen Mom 2, Kailyn Lowry, who is arguably one of the more reasonable moms on the show was reportedly extremely angry at the way footage was edited. Kailyn said the intimate scene (a shower scene) between her and ex-boyfriend Jo was scripted. MTV wasn’t there when she cheated on her then-boyfriend Jordan with ex-boyfriend Jo, but producers made it seem like it happened while cameras were around. She later went back on what she said and sent out a tweet that said, “I never reenacted that hook up!” But it’s unclear whether she did so under obligation to MTV. She also said the scene where she confesses her indiscretion to Jordan was reenacted which is why she comes off so “coldhearted.” Jordan already knew about the cheating, but because of his contract had to reenact the conversation on camera.

In order to capture the up close and personal stories of these teenage girls, film crews would begin tailing them around the fourth and fifth month of their pregnancy. A director, producer and camera crew would be assigned to each girl and followed them around during their daily tasks for up to 13 hours a day, approximately one week each month. A former camera operator, known online as “Opticalsk” posted during an August 2012 Q&A chat on Reddit said, “It’s one of the worst jobs I’ve had.”

As fans of the show, we’ve often wondered why crew members do not intervene in dangerous situations, like fights between Amber and Gary or when Leah is seemingly on drugs while taking care of her young children. According to the former camera operator, “As a camera operator I’m not allowed to interfere. Legally can’t even hold the babies. The producer/director would interfere and shape the ‘story.'” The former MTV employee went on to say that there is a policy in place when neglect or abuse is suspected, but it is rarely followed: “[The] rule was to file your complaint with [the] production manager. If the production manager felt that they were legally bound to submit the complaint to the authorities they would. Of course, they never did. It took a lot of alcohol to fall asleep. I couldn’t take it half way through the 3rd season and quit.”

7 Most Hated Teen Mom Dads Ever

“Opticalsk” wrote that many of the teen moms lived in unsanitary conditions and that their homes were ‘filthy’ and ‘disgusting.’ The former camera operator reveals that Leah Messer’s house was the worst out of all the teen moms on the show! The employee wanted to call child protective services on numerous occasions: “Filthy houses (dog poop on the floor, bloody tampons sitting in a corner for months, weeks old food everywhere, etc) one of the worst is Leah (Messer), filthiest person I’ve met. When feeding her twins she would spill a bunch of cheese puffs on the nasty carpet and the girls would crawl around and suck up the cheese puffs, no hands involved. This made me cry a few times.”

6. Who was the Best Person to Film?

Comments from the former cameraman revealed that Corey Simms, Leah’s ex-husband and the father of her twins was the best person to film for the show: “The best person on the show is Corey, Leah’s ex. Really sweet guy. He never should have agreed to be on the show.”

5. Who was the Worst Person to Film?

And the award of worst person to film on the show goes to…the messy Leah Messer! The former MTV employee revealed in a statement online, “I would have to say that Leah is the worst. Lots of horror stories about her.”

In the book, Teen Mom Confidential: Secrets 7 Scandals From MTV’s Most Controversial Shows, Danielle Cunningham from season three of 16 and Pregnant said that producers would purposely instigate conflict during the filming process in hopes of catching more drama for the show. The guys and gals were instructed to discuss their relationships and things that weren’t going well in their relationships while cameras were rolling. The cameraman reinforced this by stating that both shows are heavily scripted: “It gets to the point where the director is feeding them lines.” It was also reported that Daniel Alvarez, who briefly dated Farrah for six weeks when she moved to Florida, said that many of their encounters on the show were either reenacted or staged, like him meeting Sophia for the first time and when the couple went horseback riding on their second date. Film crews and producers needed to film specific scenes in order to tell a story for their show.

3. Who was the Rudest Teen Mom?

It isn’t surprising to us that Farrah Abraham is reportedly the rudest teen mom on the show. She would throw temper tantrums and treat the film crew like “crap” by slamming doors in their faces while they would be trying to follow her and film. This all escalated with an actual physical altercation with one MTV’s producers Larry, but the two patched things up. Abraham also makes sure a porta-potty is delivered to her house before filming begins because she doesn’t want crews using her bathroom.

2. How Much Do The Teen Moms Make?

The teen moms on the MTV series started out making up to $150,000 per season, but now that the show has gained more success, the stars are making a whopping $300 to $350 thousand per season and when the ratings go up so do their bonuses. The former cameraman says this is a lot of money, especially considering where most of these teen moms live and the conditions of their homes. Clearly, there is some unwise money spending going on!

1. Crew Members Partied With The Cast

In part of the Q&A on reddit.com, “Opticalsk” admitted there some inappropriate incidents between the film crew and the girls on the show: “One crew member was caught in the hot tub at our hotel with one of the girls friends. He was promptly fired. She asked for his age. He was 38. She started screaming and sh-t hit the fan.”