10 Things You Didn’t Know About The Baby-Sitters Club 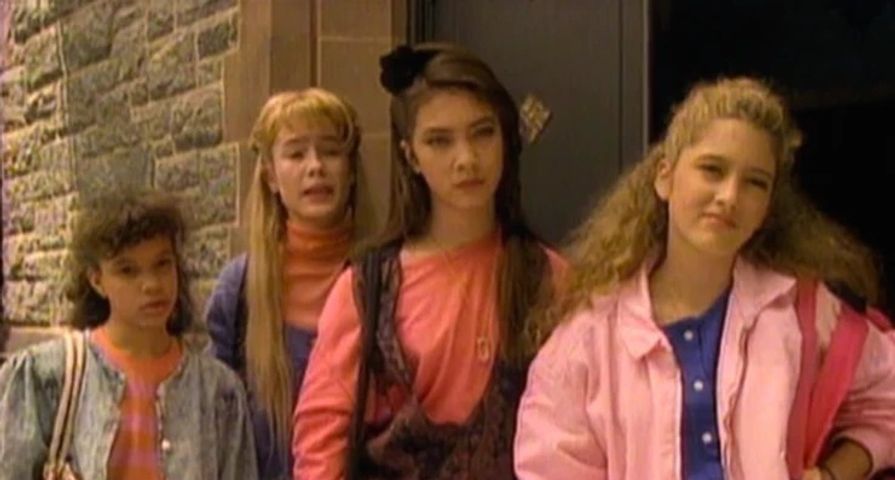 Any person who grew up in the ’80s and ’90s knows about The Baby-Sitters Club. It was a hugely popular Scholastic novel series written by Ann A. Martin which started out as a four-book series and spiraled into an entire franchise with 213 novels in total, a spin-off HBO show and movie. The books followed the lives of a group of friends who ran a local babysitting service. It covered all kinds of common teenage problems like sibling rivalry, peer pressure, jealousy, parents, divorce, etc. We’re taking a walk down memory lane with these 10 things you probably didn’t know about The Baby-Sitters Club series!

10. Where The Idea Originated

Scholastic editor Jean Feiwel was the one who came up with the idea to create The Baby-Sitters Club book series. The idea came to her when she joined Scholastic in 1983 and came across a book called Ginny’s Babsitting Job. She noticed how successful the book was despite having “a rotten cover” and being buried in the book club’s catalog. “I thought, it must be something about baby-sitting because it’s not something about Ginny or the cover,” said Feiwel. She approached her former colleague Ann M. Martin with the idea and the rest is history! “All I gave Ann was a glimmer of an idea — a series about a babysitters club. She came up with everything else.”

9. Based on Real Experiences

One of the reasons the book series became so popular was because readers really related to the characters, and that was because the creators drew from real life experiences. She based a lot of the characters off her own real life friendships; for example Mary Anne and Kristy were based on Martin and her childhood friend, Beth. “We started a number of clubs and they were all her idea. They lasted for about two days, but it was like the old Judy Garland-Mickey Rooney movies: ‘Hey, let’s start a club.’ We’d meet in Beth’s room, eat cookies and then go home,” said Martin in an interview with The Washington Post. On the other hand, the character of Claudia is named after Martin’s friend Claudia Werner, and the Perkins girls were based off her goddaughters. “As adults, they tell me that it’s a lot of fun for them to look back and read about the characters that were inspired by them,” said Martin in an interview with Scholastic.

8. Claudia and the Sad Good-Bye

In an interview with Life back in 2002, Martin revealed which book was the hardest for her to write. She said it was Claudia and the Sad Goodbye, which tells the story of Claudia having to deal with the death of her grandmother. Martin wrote it shortly after she lost her own grandmother. “There was a lot of me in the book,” she said.

Author Ann A. Martin decided to give the character Stacey diabetes after two of her friends in real life were diagnosed with the condition. “It never occurred to me that after I wrote this book [The Truth About Stacey] I would hear from so many readers who actually recognized the warning signs of diabetes and diagnosed themselves based on Stacey’s story,” said Martin in an interview with Entertainment Weekly.

6. Kirsten Dunst on the Cover

All of the covers of The Baby-Sitters Club books were painted by Hodges Soileau, who now teaches part-time at Ringling College of Art and Design in Sarasota, Florida. Soileau has painted over 300 book covers including The Boxcar Children series and many Harlequin romance novels, but for The Baby-Sitters Club he worked with models and one of those models back in the day happened to be Kirsten Dunst! She was only a small child at the time. She confirmed this in a 2008 interview with Parade when she said: “My first cover was a book in the Baby-Sitters Club series, Claudia Gets a Phantom Phone Calls.”

The Babysitters Club series has accumulated so many books over the past few years that it became impossible for Ann A. Martin to write them all herself. At first she was averaging one book a month. In her daily routine she woke up each morning and wrote from 8 a.m. to 6 p.m., but as spin-off series were being created the work load became too much. In an interview with the Washington Post in 1995, Martin said: “I’m responsible for 12 Baby-sitters Club books a year. Twelve Little Sisters books, six mysteries, and about four Ms. Coleman books [another BSC spin-off], and two or three other titles…It totals over 30 books a year. I don’t even think Stephen King could do it.”

Ann A. Martin took her writing very seriously! For the book “Jessi’s Secret Language” when Jessi learns American Sign Language while babysitting Matt, a deaf child, she took a signing language class. “This is one of the stories that I hold close to my heart. Jessi babysits for a boy who communicates using sign language. I took a class in signing and also had the manuscript vetted for accuracy,” said Martin. To help balance the work, Scholastic hired a small group of ghostwriters, but Martin still had full control over what was in the book. She’d produce an outline of the plot and edited them as they came in.

3. Stacey Written Out of the Series

In the thirteenth book of the series, Goody-bye, Stacey, Good-bye, Stacey leaves and goes back to New York City. A lot of fans were really upset by her departure because she was the most popular character. “I thought it was reasonable that in a group of friends the size of the Baby-sitters Club, one member might move away at some point. Since Stacey hadn’t grown up in Stoneybrook, I thought it made sense that she might have to move back to New York City. We didn’t expect the backlash from fans when Stacey moved. This is when I found out that Stacey was the most popular character at that time,” said Martin in an interview with Entertainment Weekly. She was brought back into the series in book #28 called Welcome Back, Stacey!

Since the book series was such a huge success, Scholastic wanted to create a TV series, but when they approached the networks with the idea it was put to a halt because no one throught a TV show about all girls would do well. One network suggested it be turned into a cartoon, while another suggested adding more male characters. After dismissing all those options, Scholastic created two straight-to-VHS specials. According to former Scholastic VP, Deborah Forte, it was extremely hard to find actresses who resembled the characters in the book. “We saw 500 girls because we were looking for very specific physical characteristics,” she said in an interview with the Philadelphia Enquirer back in 1992. Afterwards many people were shocked at how well the videos did. Scholastic sold a million cassettes for $12.95 each and because of their success, HBO jumped on board to create 13 half-hour episodes which aired in 1991.

1. The Ghost at Dawn’s House

Not all of Martin’s inspiration came from her teenage years as a babysitter. One book in particular, The Ghost at Dawn’s House, was drawn from her childhood desire to find a secret passageway in her house. “I grew up reading Nancy Drew books and loving mysteries in general. I desperately wanted to find a secret passage in my own home despite the fact that it was built in 1960. In this book, Dawn lives out my fantasies by finding a secret passage in her own (very old) house,” said Martin to Entertainment Weekly. While it’s clear she got a lot of inspiration from different places, Martin said the one place she didn’t take ideas from was fans because their suggestions were always way too dramatic for the series.