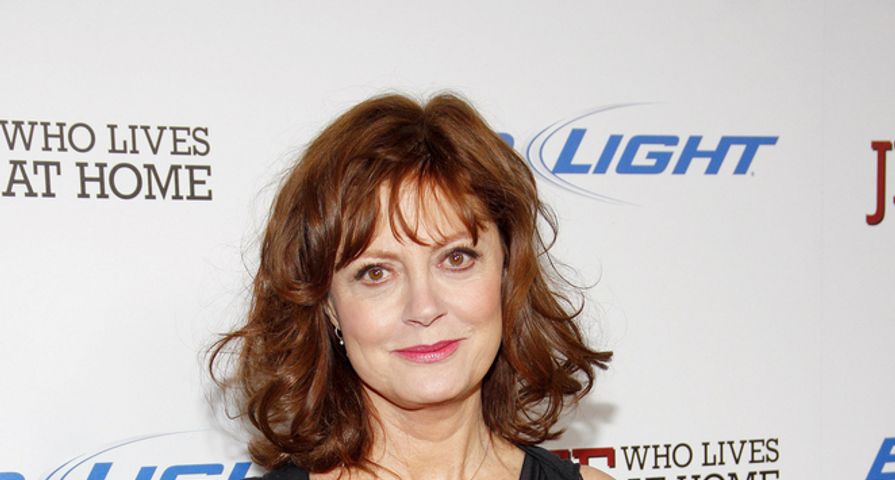 Susan Sarandon has a film career that has spanned over four decades. She’s been nominated for five Academy Awards, winning one for Best Actress for her role in Dead Man Walking. Even after all these years, she’s still a force to be reckoned with and is still considered one of Hollywood’s most beautiful actresses. Sarandon has a birthday coming up, so we have 10 things you didn’t the actress:

Susan Abigail Tomalin was born on October 4, 1946 into a working class family in Jackson Heights, Queens, New York City, but she was raised in Edison, New Jersey. Her father Phillip was an advertising executive, television producer and, at one point, a nightclub singer and was of English, Irish, and Welsh while her mother, Lenora, was Italian-born. With nine siblings – four brothers and four sisters – she was the eldest.

She was raised Catholic and attended Roman Catholic schools while she was growing up. When she was young, her faith was very important to her. “I was very spacey, kind of in my head, dreamy and really concerned with my faith and being a good person. When things would go off, it was shocking to me because I was trying so hard and something about me just got on everybody’s nerves,” she told the Los Angeles Times.

The Oscar-winning actress attended Catholic University of America in Washington, D.C., not because she was still devout at that point, but because her parents missed the deadline on all of her other college applications, so this was the only school she could get into it. She earned a BA in drama, gradating in 1968 and it was at Catholic University of American that she met her first and only husband, Chris Sarandon.

Sarandon married Chris Sarandon in 1967 and they moved to New York City together. He was an aspiring actor who found work on Broadway while she almost immediately was cast on a TV soap opera and then won the lead in the crime drama, Joe. “So I had never taken acting lessons, never thought of myself as a practical actor or anything, but just sort of fell into it,” she told The Guardian in 2014.

6. Banned from the Oscars

The Dead Man Walking star and her partner at the time, Tim Robbins, were banned from ever presenting again at the Oscars after they gave an impromptu speech at the Academy Awards in 1993, urging the U.S. government to close the Cuban internment camp where they were holding 250 Haitian refugees who’d tested positive for HIV. The ban didn’t last long though and it was reversed within the first few years.

She was married her college sweetheart, Chris Sarandon, in 1967 when she was only 20. They divorced 12 years later in 1979. After that, she never married again. In the late ‘70s, she was then romantically involved with director Louis Malle, who was 30 years her senior, and in the ‘80s she had a relationship with her The Hunger co-star David Bowie. In the mid-‘80s she had a relationship with director Franco Amurri and they had one child together, actress Eva Amurri. In 1988, she entered into a long-term relationship with actor Tim Robbins after meeting on the set of Bull Durham. They have two sons together, Jack and Niles, but she and Robbins broke up in 2009 after 21 years together. She then began dating Jonathan Bricklin, son of businessman Malcolm Bricklin, who was half her age, but they broke up in 2015. 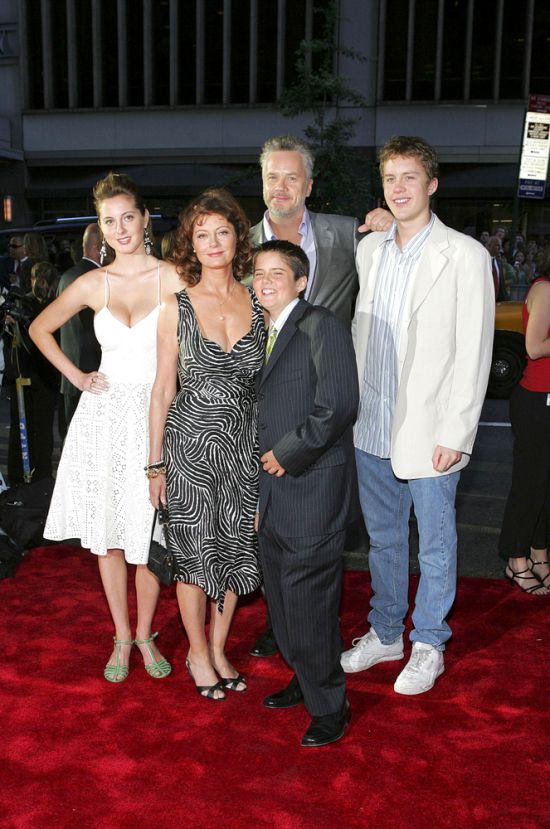 The award-winning actress got her first break in The Rocky Horror Picture Show, but it wasn’t until 10 years later when she landed the role in Bull Durham where played a smart and sexy baseball groupie that she finally became a star. At this point, she was in her early 40s. She really had to grovel to get the role in Bull Durham because the studio thought that she was too old for the part. She had to fly herself out to read for the part for director Ron Shelton and, to prove them wrong, made sure to wear an off-the-shoulder red and white dress that was very form fitting. After the audition, she chatted up her detractors and the rest is history. 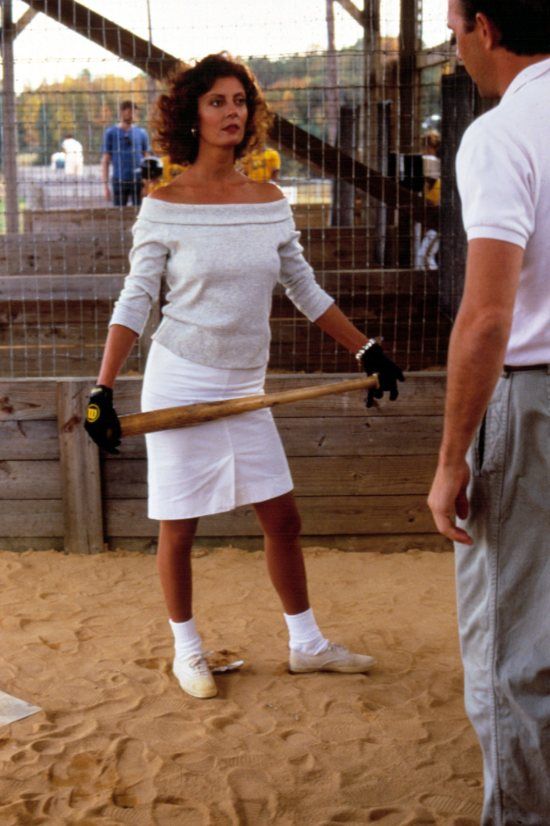 In an interview with The Daily Beast, she admitted that she’s experimented with mushrooms, acid and marijuana. “Well, it’s pretty psychedelic to begin with,” she said. “But, yeah, I’m not new to the idea of mushrooms… I’m not really looking for chemicals, and I don’t like to feel speedy. But I’ve done Ayahuasca and I’ve done mushrooms and things like that… It does remind you of your space in the universe – your place in the universe – and reframe things for you. I think you can have some very profound experiences,” she said. 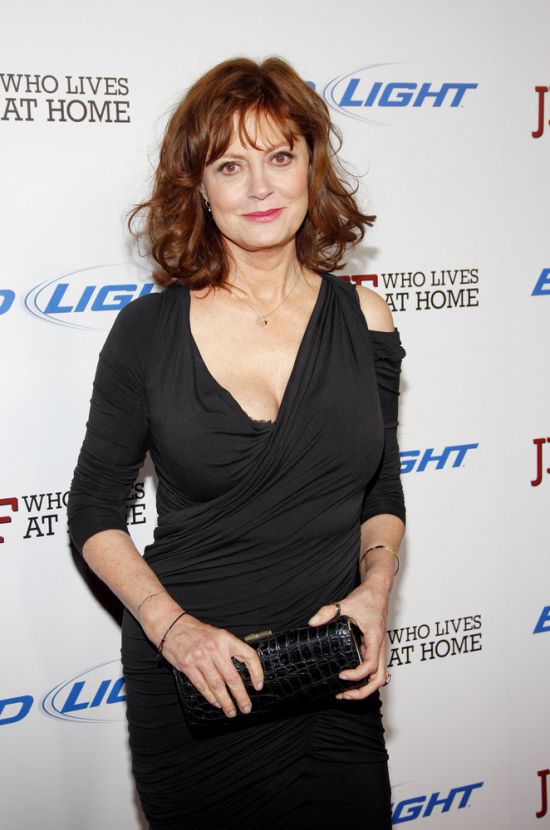 Sarandon felt restless during her late 30s. She wasn’t getting the parts in movies that she wanted and she was looking for something to give her life more meaning. “I was praying in every chapel. I had become more and more hands-on political; I had just come back from Nicaragua, and was praying for something to give my life more meaning. I was not looking to have a child – I was almost 40 – but I was not that satisfied in this profession and thought, there has to be something that has more meaning,” she told The Guardian. “In movies, I wasn’t getting parts that were stretching me so much. I was earning a living and having a good time; I’ve always had a good time. But I was at a crossroads and needed to move on in some way.” Just when she was feeling this way, she got pregnant with her daughter, Ava Amurri. The pregnancy was surprising because she had been told when she was a lot younger that she had endometriosis and would never be able to conceive.

The Thelma & Louise star isn’t savvy when it comes to her investments. According to her, the only smart investment decision she has made is with real estate, which she acquires so that her children have a place “where the maintenance isn’t too high and they’re safe. She’s also currently in a lawsuit with a former business manager because she can’t be bothered to get involved in the financial aspect of her investments. “I just glaze over when people start talking about numbers,” she said.