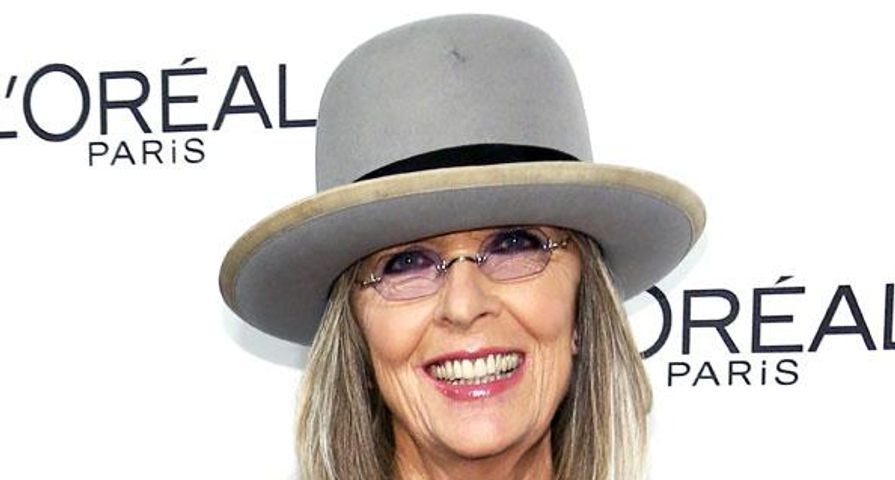 Diane Keaton is well known for her work on-screen and behind the camera as a director and producer. She started acting in the ’70s and has now appeared in nearly 50 films! Her big break came when she was cast in The Godfather in 1972, but some of her best known work came not long after when she did a series of Woody Allen projects like Play It Again, Sam, Sleeper and Annie Hall, which won her an Academy Award for Best Actress. The beloved actress is turning 71 on January 5, so here’s a look at 10 things you probably didn’t know about her!

Diane Keaton was born Diane Hall on January 5, 1946 in Los Angles. In the ’50s her family moved to a suburban neighborhood in Santa Ana, California, which is where she grew up with her three siblings, a brother Randy, and two sisters, Robin and Dorrie. Her father, Jack Hall, was a real-estate broker and her mother, Dorothy, was a housewife. Her mother won the “Mrs. Los Angeles” pageant for homemakers in the mid-50s which inspired Keaton to become an actress. She went to college as an acting student after high school, but soon dropped out to pursue a career in New York City.

Today Keaton and Jack Nicholson are close friends, but there was a time when she thought of him as ‘the one that got away.’ When she first met him thirty-some years ago while working on the film Reds, she admitted she couldn’t be his friend because she wanted something more from him, but she just wasn’t his type. “I didn’t want to be his friend. I wanted him to kiss me. It didn’t happen.” In 2003 they were cast together in the film Something’s Gotta Give which kindled a friendship. Ten years after they ended up becoming quite close friends as he lives down the street from her, so they meet on a regular basis for lunch. In her memoir, Then Again she revealed that he gave her some of his financial stake in their film, which she described as a check “with a lot of zeroes.”

One of Keaton’s most talked about relationships was her on-again-off-again relationship with her Godfather co-star, Al Pacino, in the ’70s and ’80s. “I was really very taken with Al from the very beginning. Our relationship was absolutely wonderful in some ways, but is he the love of my life? No, not really, because he wasn’t the love ‘of my life’ …He was the love of that time of my life,” she said in an interview with The Telegraph. The first time she met Pacino was in a bar in New York before filming began and Keaton admits she fell completely in love with him, but when filming ended, so did their romance. “I kept trying to figure out what I could do to make [him] mine. He was never mine. For the next twenty years I kept losing a man I’d never had,” she said.

In Keaton’s memoir, Then Again, she talks about her struggle with bulimia. It started when she was offered her first gig, Hair, on the condition that she lose weight for the role. “I don’t think it was called bulimia then. It was just this trick you could do. It’s a horrible problem,” she said. At the height of her illness, Keaton recalled dodging dates with Allen so that she could stay home and eat unimaginable quantities of food, then make herself sick. “The demands of bulimia, outshone the power of my desire for Woody. Pathetic, but true,” she wrote in her memoir. Keaton struggled with the eating disorder for five years until she was 25 when she just one day began eating normally. As she got better, she said one day she just “didn’t open half a gallon of rocky road ice cream.”

Keaton has many creative and interesting hobbies like photography, singing, writing, but some of the more surprising ones is buying and fixing up homes, then selling the properties for a profit. She’s had some pretty high end clients like Ryan Murphy and Madonna who purchased a house from Keaton in 2003 for $6.5 million! She has now bought and resold several mansions in Southern California.

Just by looking at her style, it’s clear Keaton is a little bit eccentric. She loves to do things outside the norm. She even admits she’s a bit of an oddball! “I’m a bit of an exhibitionist. I do things that are a little bit off the beaten track.” This kind of creativity was ingrained in her as a child and even described her family as extremely eccentric when she was growing up. Her self-deprecating humor and quirky sense of humor crosses over into her fashion sense and surprisingly became a bit of a fashion icon in the late ’70s. She reintroduced the idea of women wearing men’s clothing. Today she’s rarely ever seen in public without an over the top conservative outfit that includes a hat and gloves.

One of Keaton’s most famous relationships is with the iconic director, Woody Allen. He seemed to have the most lasting affect on her as they still remain close friends today: “I still love him — there are some people who stay in your life and it matters and they are in for the long haul. We talk often on the phone.” The couple met when she auditioned for his stage production Play It Again in 1968. She has since admitted that she was in love with him long before they met when she used to watch him on TV as a kid. She moved to New York City, auditioned for his play and worked hard to be his girlfriend. Her strong efforts paid off and the two dated for a solid five years before breaking things off in the late ’70s. She eventually won his heart and he even credits her as his muse during the early years of his film career. Over the next 20 years she appeared in 8 of his films.

According to Keaton, her father plagued her with ridicule as a child and made her feel like she couldn’t do anything right. Keaton described herself at the age of 11, hating what she saw in the reflection of the mirror. She started wearing make-up in grade nine to improve her beauty and at the age of 14 she slept with a bobby pin on top of her nose in hopes of flattening out a bump. She also said she would practice a series of smiles and exercises with her eyes for 30 minutes each day in the hopes of making her eyes bigger. In her twenties, she tortured Woody by constantly obsessing over her insecurities. “I remember Woody saying, ‘Living with you is like walking on eggshells. I think [he said that] because I had too much sensitivity. I was hurt by everything…’They didn’t like me,’ ‘Why am I not good enough?’ I didn’t get the part,'” she said.

Keaton has come to terms with the fact that she will never get married, but she could never face the fact that she wouldn’t be a mother, so she adopted two children at the age of 50. She has a girl named Dexter, who is now 20 and a boy, Duke who is now 15. When asked about her decision to adopt she replied: “I wouldn’t say I knew it was right. I wouldn’t say it was the right thing to do. I’m glad I did it. It’s right now. But then? I just thought, ‘If you don’t, who are you?’ Without having tried to do something that someone did for you? When I think what my mother did; she gave me this gift. I really, really should give it my all for somebody who doesn’t have a mother who’s going to take care of them. And it won’t be perfect, because of course it’s not,” she said.

In an interview with The Telegraph, Keaton talked about marriage and how when she was a little girl she longed to be married. “I remember watching [the actress] Myrna Loy being interviewed and somebody said, ‘It’s too bad you’re not married anymore.’ And she said, ‘I don’t want to be married anymore — not at all.’ And I remember thinking, ‘How sad, how could anybody come to that?’ …So I looked at her and thought, ‘That will never happen to me.’ But you know what? It has happened.” Keaton, now 70, said she could never imagine getting married. “I don’t think I was fated to not be married, but I don’t know. I think you have to have an understanding of what marriage is, and I don’t think I ever did,” she said.