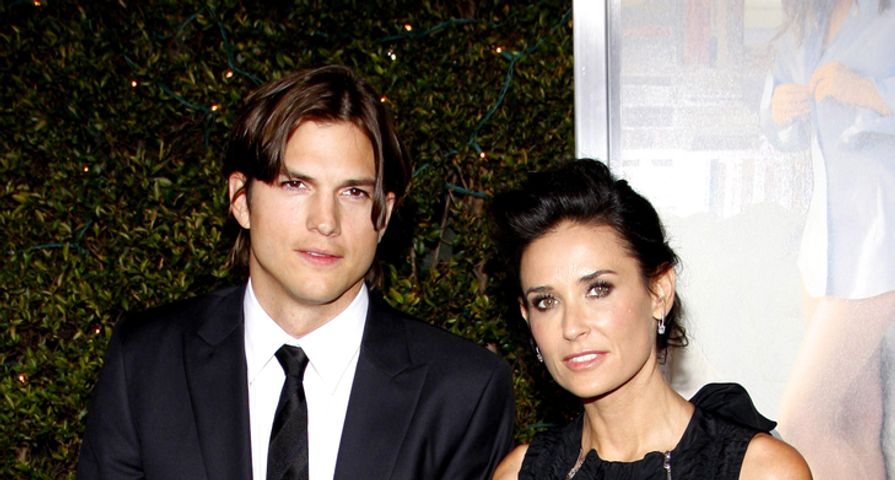 Demi Moore and Ashton Kutcher were definitely one of Hollywood’s most surprising couples. When they first got together, many of us weren’t expecting them to stay together any longer than a year, but they proved us all wrong by getting married and then staying married for six years. It’s been several years since they officially split up for good, but we have 10 fun facts about their relationship, so join us for a stroll down memory lane!

The brunette beauty and the handsome television star met back in 2003 at a casual dinner with friends in New York City. She was 41 at the time and he was 25. Despite the age difference, they two immediately connected. According to Demi, she remembers that she was wearing her “dress that gets results” on that “life-changing evening.”

They made their first red carpet appearance together at the Charlie’s Angels: Full Throttle premiere in June 2003. At the time, Drew Barrymore commented that Moore’s character wanted to overshadow the Angels in the film, and she managed to do that at the premiere by bringing her hot new boyfriend.

After the Two and a Half Men actor and the Striptease actress began dating, he converted to Kabbalah, a form of Judaism that Demi was practicing. According to Kutcher, practicing Kabbalah changed his life. “It is one of the essential ingredients in the success of our marriage. Every time we come up against a challenge, we turn to the tools we have learned and a solution follows. Imagine waking up every day knowing with certainty that whatever obstacle you come up against, you will be able to navigate through it to the best possible outcome. That’s what our spiritual foundation provides,” he told Harper’s Bazaar.

Kutcher and Moore were married in September 2005 in a Kabbalah ceremony at their Beverly Hills home in front of 100 guests, including Moore’s three daughters, actress Soleil Moon Frye and her husband Jason Goldberg, as well as other close friends and family. It was Kutcher’s first marriage and Moore’s third. She was previously married to musician Freddie Moore and actor Bruce Willis.

After the Golden Globe-nominated actress divorced Bruce Willis, the two remained friends, so when she got together with Kutcher, it was only natural that Willis and Kutcher became friends too. They were all such good friends that the Die Hard actor invited his ex and her beau to vacation with him at his home in the Turks and Caicos. Kutcher was also really close with Moore’s three daughters, Rumer, Scout and Tallulah. They called him “MOD,” short for “My Other Dad.”

5. Children of Their Own

Before and after they were married, both Demi and Ashton both said that they were interested in having children together. “We talk about it and it’s something that we would like,” she told Elle UK. “He’s an amazing father to my daughters already, so I have no doubt that if it’s in our future, it would be another incredible part of our journey together.” Even though they both expressed interest in having children, they didn’t end up starting a family together.

In 2010, they started the Demi and Ashton Foundation (DNA), which aimed to eliminate sex slavery worldwide. After their separation, the foundation’s name was changed to THORN: Digital Defenders of Children. While the foundation still focuses on sex slavery, it’s more concerned with the role technology plays in exploitation crimes.

Rather than give Moore diamonds, the television actor preferred to leave her thoughtful post-it notes around the house. “If you go to our house, I have post-it notes placed in various locations all with messages of encouragement or love or just thought,” Moore said. “Some have been there seven years.”

In 2010, Kutcher found himself in the midst of a scandal when he was accused of cheating on Moore on two separation occasions. Someone reportedly saw him at a restaurant in Hollywood making out with a leggy blonde and then another women came forward claiming that the actor hooked up with her at his and the Moore’s home while the actress was away filming. He denied this and his wife supported him. In 2011, another woman by the name of Sarah Leal alleged that she and the Two and a Half Men star hooked up in San Diego on his and Moore’s sixth anniversary.

A couple of months after the That ‘70s Show star was outed for cheating on the G.I. Jane star, she finally announced that she was going to end her six year marriage. “It is with great sadness and a heavy heart that I have decided to end my six-year marriage to Ashton,” her rep said in a statement. “As a woman, a mother and a wife there are certain values and vows that I hold sacred, and it is in this spirit that I have chosen to move forward with my life.” In response, Kutcher tweeted, “I will forever cherish the time I spent with Demi. Marriage is one of the most difficult things in the world and unfortunately sometimes they fail.” Instead of immediately divorcing, however, the couple remained separated for over a year before he finally filed in December 2012. Five months after he filed, Moore finally filed divorce papers in March 2013 and they finalized their divorce in November 2013. The divorce reportedly took so long because they were squabbling over money – Kutcher’s money to be exact. At the end of their marriage, he made a lot of money thanks to his role on Two and a Half Men and she wanted to be compensated.