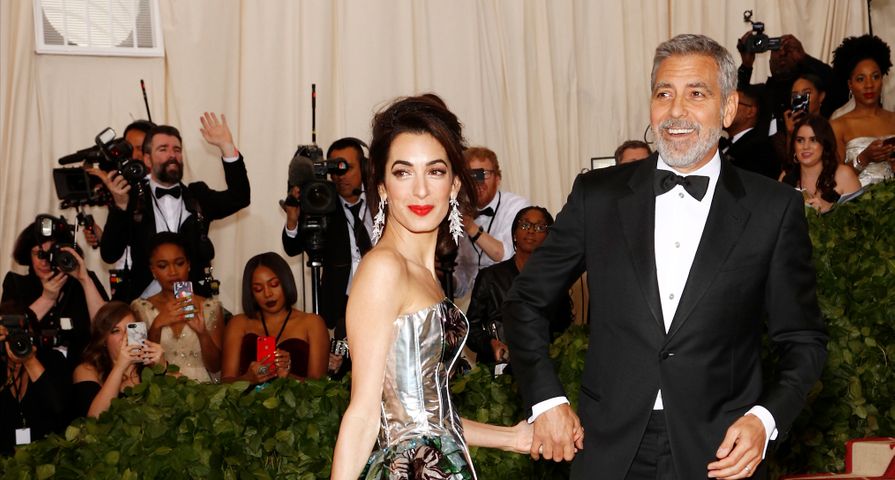 Every year on the first Monday of May the Met Gala takes place where A-listers gather in New York in the name of fashion. The 2018 Met Gala gave way to a handful of best-dressed, disappointing and downright outrageous outfits, but this year in particular also had a surprising amount of couples making their red carpet debut together! Since the Met Gala surrounds experimental fashion, these red carpet appearances are some of the most noteworthy style moments of the entire year. Whether the couple is making their first public debut together or have been by each other’s sides for years, follow along for 12 of the most fabulous couples from this year’s Met Gala:

Supermodel Irina Shayk and Bradley Cooper were seriously glowing at the 2018 Met Gala! The bronzed and beautiful couple posed with all smiles while making their red carpet debut. Shayk wore a plunging golden dress that showed some major cleavage and featured a full skirt of textured feathers and a thick spiked choker. Cooper stood by her side looking more dapper than ever in a simple black and white tuxedo which he topped with a black bow tie. 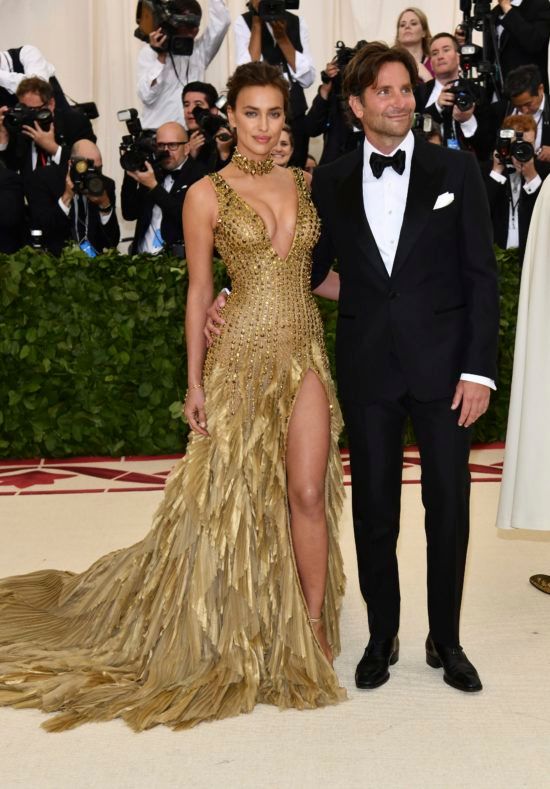 Harry Connick Jr. and Jill Goodacre went the black-tie route for the Met Gala this year and both opted for sleek, black outfits. Although neither wore extreme, out-of-the-box creations like some of their fellow Hollywood A-listers, the two did have details of opulence. Connick Jr. opted for a suit jacket that featured a subtle brocade texture while Goodacre wore a black dress with sheer paneling which resembled a stained glass window. 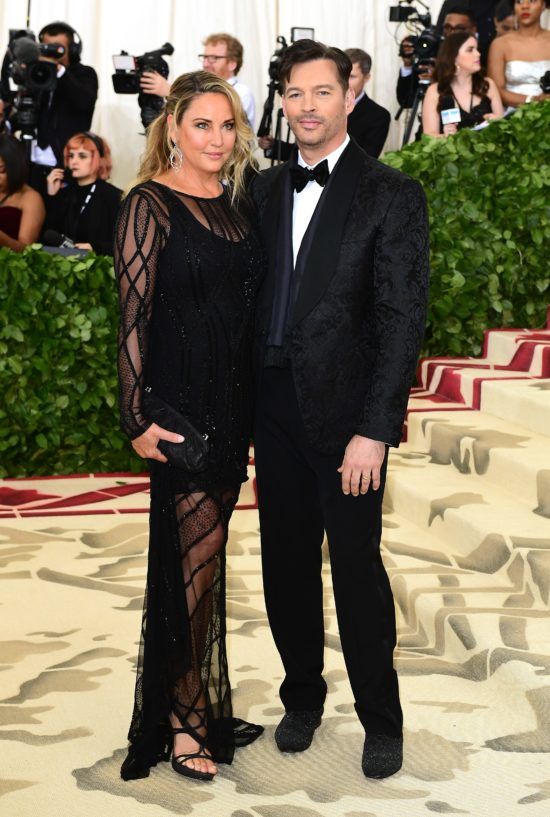 Colin Firth and wife Livia Giugioli were one of the most elegant couples of the evening and both opted for the simplistic route with their fashion. Giuggioli donned a sleek ivory dress which featured a high-neckline and cape detailing which draped gracefully over her shoulders. She made her look pop with touches of green and yellow on her accessories, while Firth stood beside her looking handsome with a black bow tie and dark-rimmed glasses. 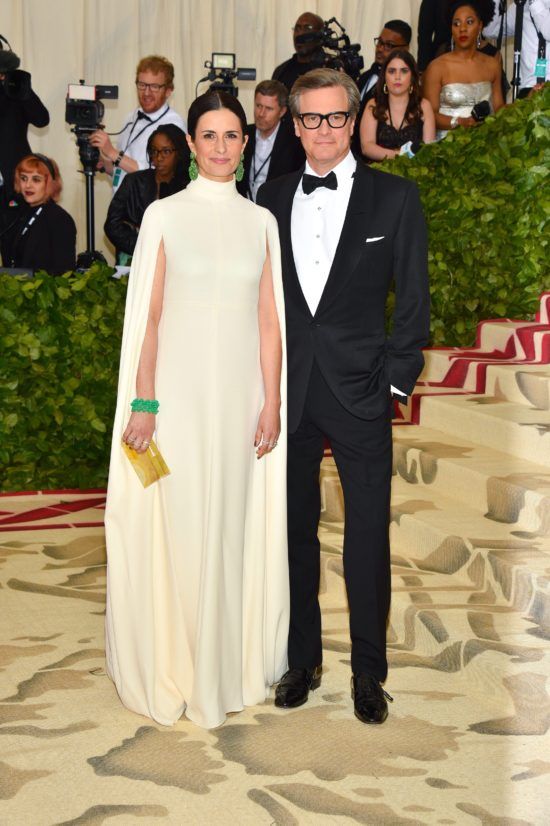 Rande Gerber and Cindy Crawford were a knockout couple who had all eyes on them at the 2018 Met Gala! Crawford opted for a sleek red gown that really popped against her dark features and flattered her curves in all the right places. Her arm was laced around her husband, Rande Gerber, who kept it simple with a black tuxedo and black bow tie. 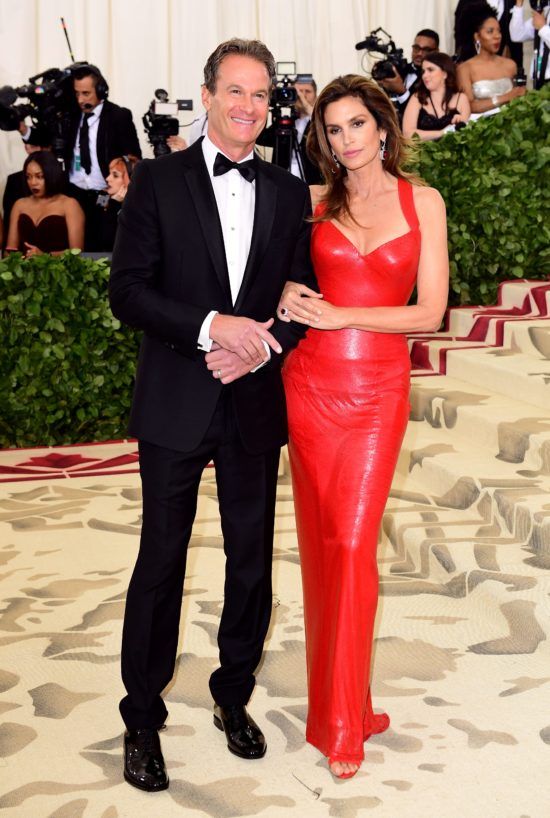 Kylie Jenner has made headlines all year while rumors swirled about her pregnancy with boyfriend Travis Scott. Kylie proved she’s ready for the spotlight again and better than ever with her Met Gala debut where the couple stepped out together for the first time. The red carpet debut was a long time coming and fans couldn’t help but fawn over how in love and happy they seemed! The duo rocked all black attire with Kylie wearing high-shine leather textures and Scott rocking a black suit with chain and belt detailing. 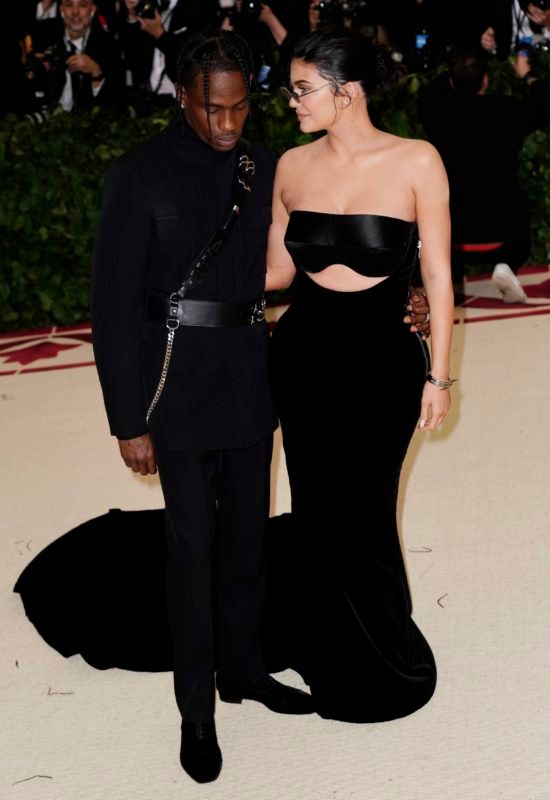 Amanda Seyfried and Thomas Sadoski were a serious power couple on last night’s Met Gala red carpet! The two married in a secret ceremony in March 2017 and welcomed their first daughter shortly after. The duo lit up the 2018 Met Gala red carpet and looked happier than ever by showing a little PDA and holding hands. Seyfried rocked a sunny yellow dress while Sadoski opted for a navy suit with black lapel detailing which played off Seyfried’s golden tones perfectly. 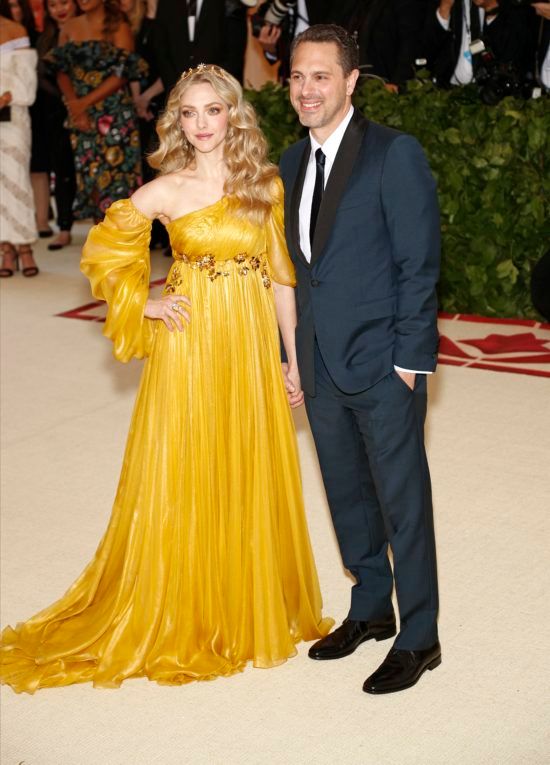 Scarlett Johansson and Colin Jost hit the 2018 Met Gala red carpet looking absolutely flawless. Johansson rocked a Marchesa cherry blossom dress while Jost wore a classic tuxedo. The duo seemed to have a blast at the event together, often breaking out into fits of giggles during their red carpet jaunt. Johansson and Jost kept their relationship under wraps for quite some time but made it official back in December and have been inseparable ever since. 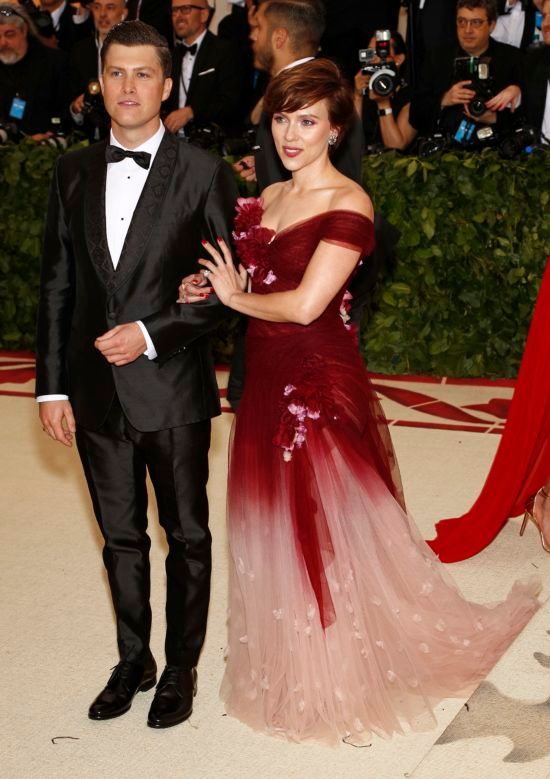 Hollywood it-couple Hailey Baldwin and Shawn Mendes made their official red carpet debut together at this year’s Met Gala as well! They stepped out in style both rocking pieces designed by Tommy Hilfiger. Baldwin wore a smokey colored dress which featured a high slit, and off-the-shoulder sleeves which she topped with a dainty flower crown. Mendes stood beside her looking happier than ever in a deep purple suit which really complemented the lavender shade of Baldwin’s hair. 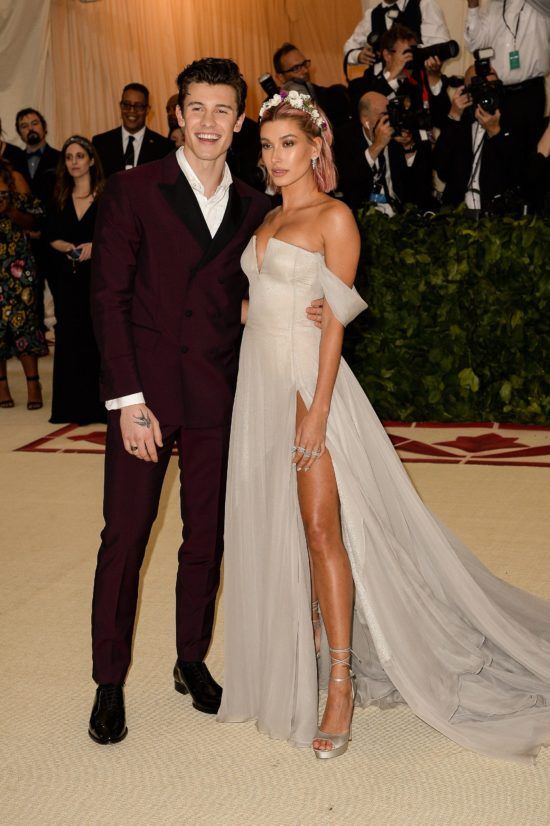 Jennifer Lopez and Alex Rodriguez made a splash when they made their official debut as a couple last year at the Met Gala! We’re happy to see that this couple is still smitten with each other and stronger than ever a whole year later. Both rocked stunning Balmain outfits with Lopez wearing a jewel-encrusted structured gown with a cross decal and Rodriguez wearing a sleek black tuxedo. 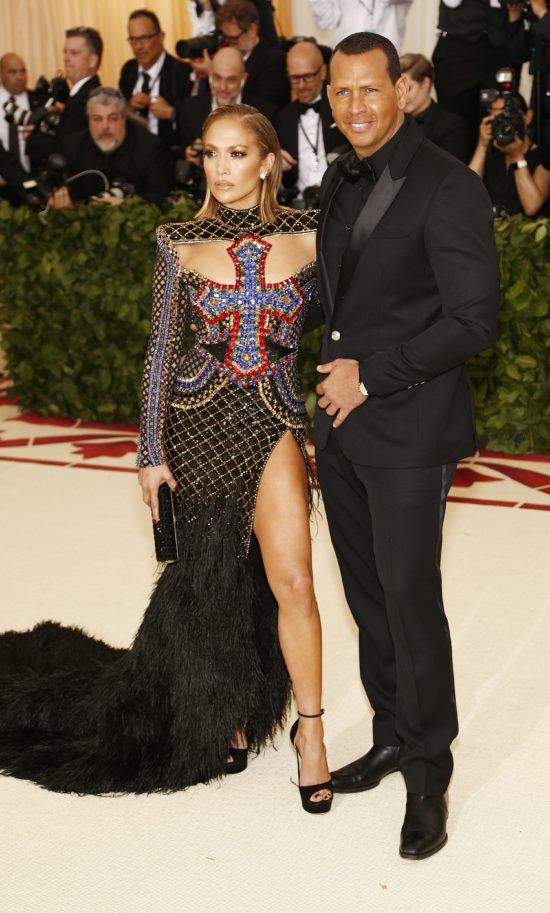 Supermodel Gisele Bundchen and Tom Brady were last night’s golden couple on the Met Gala red carpet! The two looked totally elegant and sunkissed as if they just returned home from vacation on the Mediterranean. Gisele rocked a champagne-colored satin number which featured long sleeves, ruching along the side and an elegant scarf dangling from her neck. Brady’s black tie attire complemented his wife since his sharp tuxedo featured gold swirling details along the lapels. Truly fabulous!

Of all the fabulous Met Gala debuts, we have to give the top spot to George and Amal Clooney! This year Amal was actually one of the co-chairs who was running the event and naturally, her look made a serious statement. Amal rocked a custom Richard Quinn design which featured navy trousers, a full floral skirt, and a silver bustier top. George Clooney stood beside her looking just as fabulous in a sharp black tuxedo. This couple has proven they are a force to be reckoned with and especially when it comes to fashion! 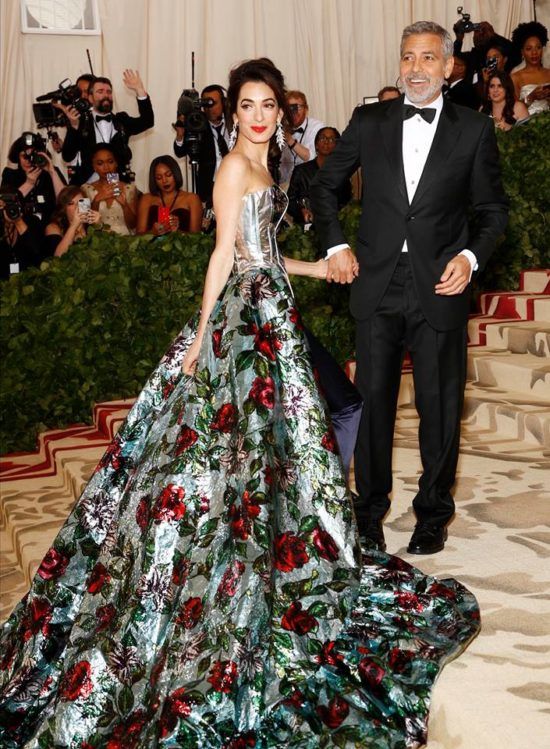