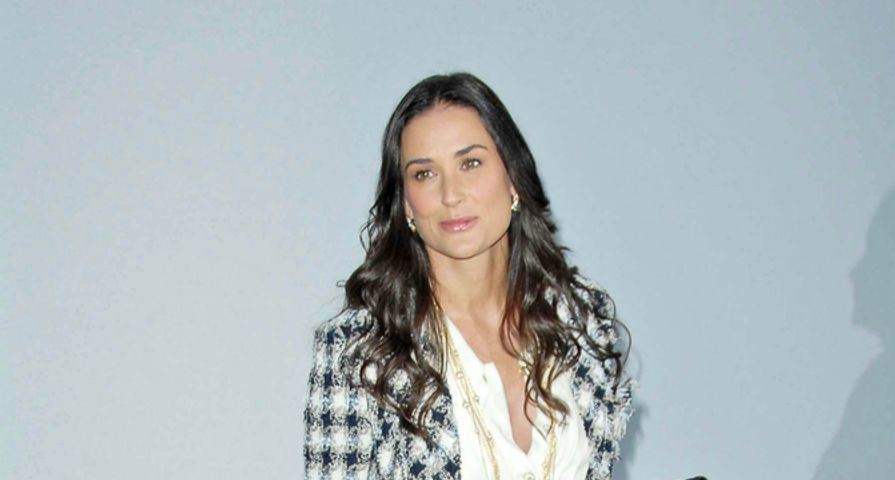 Demi Moore first rose to fame in the ‘80s but, it was during the ‘90s, that she became an A-list star. She starred in box office successes like Ghost, A Few Good Men, Indecent Proposal and Disclosure; however, after box office disappointments like Striptease and G.I. Jane, she took a long break from the spotlight. Even though she’s made several comebacks since, her career is nowhere near as successful as it once was, but that doesn’t matter – people are still really interested in her as a celebrity. In celebration of her upcoming birthday, we have 10 things you didn’t the actress:

Moore’s stepfather frequently changed jobs so the family moved around a lot. As a result, Demi had to transfer schools frequently and was unable to form long-term friendships. He and her mother, Virginia, were also alcoholics and their arguments would turn physical. When she was 15, her mother and stepfather divorced and she and her mother moved to West Hollywood, California, because her mother got a job with a magazine distribution company. During her junior year, when she was 16, she dropped out of school, got her own apartment and began working as a debt collector. A year later, her stepfather Dan, committed suicide.

Demi Gene Guynes was born on November 11, 1962 in Roswell, New Mexico. Her father Charles Harmon Sr., an air force airman, left her 19-year-old mother Virginia two months into their marriage before she was born. Her mother then married Dan Guynes, a newspaper advertiser, when Demi was three months old. She grew up believing that Dan was her father but, when she was 13, she learned that he was not when she found their marriage certificate, which indicated that they were married in 1963 – a year after she was born.

The Golden Globe-nominated actress was born cross-eyed. When she was a child, she required two operations to correct her sight and had to wear an eye patch during recovery. She also suffered kidney dysfunction as a child, which resulted in recurrent hospitalizations.

After dropping out of high school, the brunette beauty began modeling. She signed with Elite Modeling Agency and then went to Europe to work as a pin-up girl and posed for the men’s magazine Oui. During this period, she also decided to try her hand in acting. She was living next door to German actress Nastassja Kinski, who helped a young Demi to learn how to read scripts and convinced her to take drama classes.

During the height of her career in the ‘90s, the one time movie star was the highest paid actress and got a reputation for being a diva. During the promotion of Ghost, she traveled with a massive entourage that included a bodyguard, masseuse, hair stylist, cosmetician, fashion consultant and an assistant (who had an assistant). To promote Striptease (for which she was paid an unprecedented $12.5 million) and G.I. Jane, she reportedly ordered studio chiefs to charter two planes for her and her entourage. The media dubbed her “Gimme More” because of these outrageous demands.

The former General Hospital actress struggled with substance abuse issues back in the ‘80s when her career was first getting off the ground. Director Joel Schumacher sent her to rehab for drug and alcohol abuse before shooting St. Elmo’s Fire. He also threatened to fire her if she didn’t get clean. Lucky for her, she went to rehab and came back to the set clean and sober. During her relationship with Ashton Kutcher, there were rumors that she liked to let loose with alcohol and would end up embarrassing herself and him. In 2012, after they broke up, The Scarlet Letter actress began to struggle even more and was rushed to the hospital after having a seizure-like crisis after inhaling a dangerous amount of nitrous oxide (aka whip-its). She checked into the Cirque Lodge for treatment for exhaustion and has kept a low profile ever since.

The A Few Good Men actress had a tumultuous relationship with her mother, who had a long record of arrests for crimes that included drunk driving and arson. Her mother alleged that early on in the actress’ career, she would party with her daughter. In 1990, after Virginia walked away from a rehab stay that Moore had paid for at the Hazelden Foundation in Minnesota, Demi cut all ties with her. In 1997, they reunited after Virginia was diagnosed with brain cancer and the actress and her three daughters moved to Farmington, New Mexico, to take care of her until her death in July 1998.

At the age of 17, she married singer Freddy Moore, who was 12 years her senior. The couple’s marriage lasted only four years, from 1980 until 1984. She then began dating actor Emilio Estevez. They became engaged in 1985, but broke up in 1986. In 1987, she married Bruce Willis. Together, they have three daughters, Rumer, Scout and Tallulah. Demi and Bruce ended up growing up apart and in 1998 they separated and then went on to divorce in 2000. After that, she dated a karate instructor, Oliver Whitcomb. When they broke up in 2003, she began dating Ashton Kutcher. They were married in 2005, but separated in 2011 and officially divorced in 2013.

In 1998, Demi and her then husband Bruce were sued by one of their former nannies, Kim Tannahill. She contended that she was expected to work seven days a week, 24 hours a day for a low wage and no overtime pay and was subjected to physical threats and verbal abuse. The former couple countersued claiming that Tannahill misappropriated funds and slandered them. Months later, a judge threw out Tannahill’s lawsuit.

The G.I. Jane star is an avid doll collector. She is estimated to own approximately 2,000 vintage dolls and even built a house for them. Her former husband Ashton Kutcher once told Conan O’Brien that the dolls freaked him out. “I think the dolls have souls. And they’re always looking at you – we have some in the bedroom and that makes things just weird,” he said.