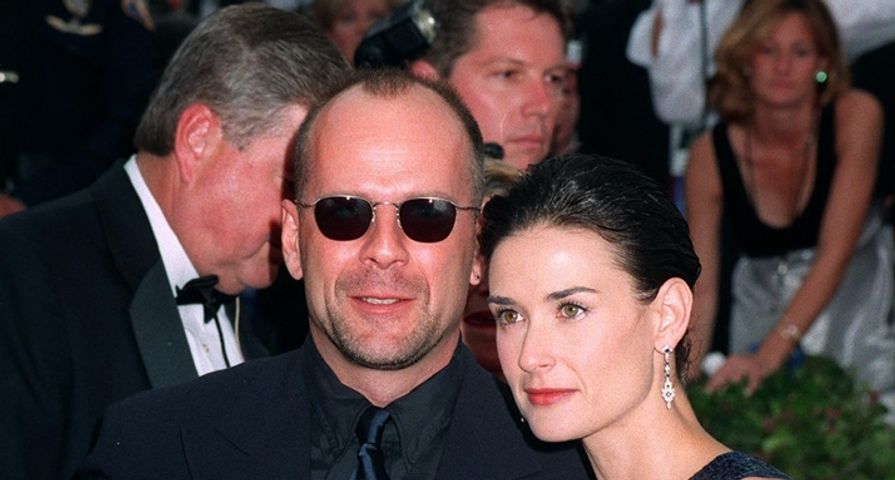 Bruce Willis and Demi Moore were one of the biggest couples during the late ‘80s and the ‘90s. They were young, attractive and successful, and they really seemed to love each other, which became especially evident during their interviews when they would constantly gush about each other. It’s now been almost 20 years since the couple called it quits, so let’s take a trip down memory lane with these 9 things you didn’t know about Hollywood’s former power couple:

They met at the screening for Stakeout in August 1987, which featured Demi’s ex fiancé Emilio Estevez, who she had recently broken up with. Bruce had a reputation for being a drinker and a womanizer, but Moore, who had already been to rehab for her own drug and alcohol use, didn’t seem to care. She told People magazine that she found the actor “just so ready to embrace and give [her] love.” Within a couple weeks they were an item and soon after his boozing stopped.

The movie stars met in August 1987 and were married just three months later on November 21, 1987 in Las Vegas at the Golden Nugget hotel with only a handful of guests present. The reverend who married them had no idea who they were until one of her coworkers pointed it out. A month later, the couple renewed their vows at a lavish L.A. bash with a select group of friends and family.

They have three children together: Rumer (born 1988), Scout (born 1991) and Tallulah (born 1994). In 1991, Moore posed on the cover of Vanity Fair’s August 1991 issue completely nude while pregnant with Scout, which caused a media uproar as the attitude towards pregnant bodies at the time was that they were “grotesque and obscene.” She helped to challenge that with this Vanity Fair shoot. During their marriage, Moore and Willis were pretty devoted to their family life, so they tried not to work at the same time so that so that they wouldn’t be away from the kids; however, they often ending up breaking this rule.

The couple lived in Hailey, Idaho, with their three children and during the 11 years that they lived there they proceeded to pour more than $7 million into the small town of 6,000 people. They opened a diner called Shorty’s, a nightclub called the Mint and renovated some buildings on Main Street, turning the little town into a tourist destination. Willis had plans to develop a $50 million marina with restaurants and a park. After his separation from Moore, however, he abruptly closed down Shorty’s and the Mint and fired everyone who worked there, and left.

During their marriage, the couple became infamous for their lavish lifestyle. Bruce was reportedly commanding $20 million a film whereas Demi was earning a salary of $12.5 million per movie. They employed a team of personal assistants and nannies, as well as a body trainer and bodyguards and didn’t have much to do in the way of raising their three children. Demi developed a reputation for being a diva. While filming G.I. Jane, she reportedly demanded that studio chiefs charter not one but two planes for her entourage and her.

Willis and Moore’s careers went in two opposite directions during the course of their marriage. She became the highest paid female actress in Hollywood thanks to movies like Ghost, Indecent Proposal and A Few Good Men during the first half of their marriage; however, because of box office bombs like The Scarlet Letter and Striptease, her reputation was shot, so she took a break from acting and retired to Hailey, Idaho, to raise her daughters. Willis’ career, on the other hand, was on the upswing thanks to films like 12 Monkeys, The Fifth Element and Armageddon.

Before he and the Striptease star hooked up, he already had a reputation for having a wandering eye and during his marriage he confirmed that, despite settling down with a wife and three kids, he still didn’t think monogamy was possible. “What is marriage,” he told Playboy in 1996. “No woman is going to satisfy a man’s natural impulse to procreate, procreate, procreate.” There were numerous rumors about Willis’ wandering eye. He reportedly got a little too close to Marushka Detmers, his co-star from Hudson Hawk, which led to her being dropped from the film, and there were also rumors about him and Liv Tyler, who he reportedly brought home to Hailey for a weekend, much to Moore’s dismay.

The couple separated in June 1998 after 11 years of marriage. The couple had been living apart for months prior to announcing their separation because of their busy schedules, but there had also been tension in the marriage due to Willis’ womanizing ways and Moore’s relentless career climbing. In October 2000, the couple filed for divorce in Hailey’s Blaine County courthouse. It took them two years to file because they first had to sort through their millions of dollars’ worth of real estate that they bought together in Hailey.

1. Sued by the Nanny

Just before they separated, one of their nannies, Kim Tannahill, filed a lawsuit against them, claiming that she had been “shamelessly exploited and abused [her], through fraud, deceit, oppression, intimidation, threats and force.” She claims that she was forced to work “seven days a week, 24 hours a day” with no overtime pay. According to the suit, things got worse in 1997 when the couple’s marriage was on the rocks and Demi began engaging in prescription drug use and allegedly locked Tannahill in a room for over an hour, physically restraining and verbally abusing her. In response, Bruce and Demi called the suit “gratuitous nonsense” and filed a countersuit, accusing her of misappropriating funds, defamation and breaking a confidentiality agreement. A few months after Tannahill’s lawsuit was filed, it was thrown out by a judge in Los Angeles.