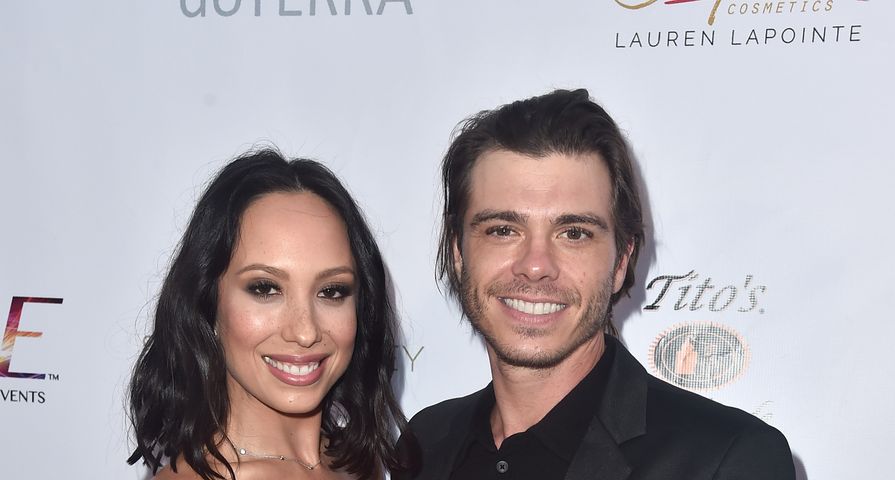 The road to happiness had quite the bump in the road for Dancing With the Stars pro Cheryl Burke and actor Matthew Lawrence, but in the end, they were meant to be together. The adorable couple have been through a lot of ups and downs all while having everything publicized and after a ten-year breakup, they are not only back together but getting married! From meeting back in 2006 to planning a wedding now, here are 12 things you didn’t know about Cheryl Burke and Matthew Lawrence’s relationship:

Back in 2006, Cheryl Burke and Boy Meets World actor Matthew Lawrence met for the very first time thanks to Matthew’s older brother, Joey Lawrence. Joey Lawrence, who starred with Matthew and their younger brother Andrew on the show Brotherly Love, competed in season three of Dancing With the Stars where he came in third with pro dancer Edyta Sliwinska and where he introduced his brother, Matthew, to Cheryl Burke, who ended up winning the season with Emmitt Smith. The pair didn’t end up dating, however, until the season tour in the fall of 2006 when Matthew went to support his brother. By early 2007, the pair had been spotted together several times and a source told PEOPLE, “They are definitely together. Cheryl is very happy.” A friend of Burke’s said, “It’s early days but I don’t think I’ve ever seen Cheryl this happy.”

After much speculation about their romance, Burke finally confirmed that she and Lawrence were an item in March 2007. For the first time, she opened up to PEOPLE about the relationship, saying, “Life is great! He’s a great, smart, wonderful guy. We started dating at the end of December while I was on the (Dancing with the Stars) tour (with his older brother, Joey Lawrence) and we’re having a lot of fun.” When asked what she likes to do when she isn’t dancing, she sweetly said, “I spend time with Matt, of course. My schedule for the past year has been work, work, work. I’m just a normal 22-year-old girl who likes to go out, go to movies, have fun, hang out with my friends, get manicures.” She also did a sweet video diary where she was asked how she keeps a good relationship with Lawrence even when on the road and busy with dance, and she replied, “Well, Matt is very supportive and he always wants to make sure we keep in contact and we talk for hours and hours.” She then surprised everyone by flipping the camera to show that Lawrence had decided to join her on the road for the summer as he said it was “wonderful” to be supporting her.

After a year of a seemingly fairytale romance, Lawrence and Burke abruptly split up in early 2008, with the dancer’s rep stating: “I can confirm that Cheryl Burke and Matthew Lawrence quietly ended their relationship a few weeks ago.”

Although for many, the split seemed sudden, it was soon shrouded in drama when rumors circulated that it came after Burke had cheated on Lawrence. Things became even more scandalous when reports surfaced that Burke had not only cheated on Lawrence but did so with Drew Lachey, Dancing With the Stars’ season two winner, who Burke had danced with on the show’s second and third tours and who was married. According to those behind the scenes, things heated up between Burke and Lachey during the third tour which began in December 2007 and ended in February 2008. According to Star, “They didn’t go very far to cover it up. Cheryl was constantly draped all over Drew. They held hands, had their legs intertwined and were always touching inappropriately.” The reports also stated that on January 22, 2008, during the stop for the show in Jacksonville, Florida, Lawrence went into Cheryl’s dressing room and caught her with Lachey. The magazine continued, “The insiders say that the next day, as tour members prepared to get on the bus to leave town, Drew had to be restrained as he ranted at Matthew and his brother, Joey in the parking lot.” Burke and Lachey adamantly denied the reports and the affair, but things looked very suspicious when Lawrence and Burke broke up as the tour ended and Lawrence allegedly told Star, “There are too many things going on. I can’t talk about it.”

After almost 10 years of being broken up, the two rekindled their romance in February 2017 and haven’t looked back, and all it took was a simple text. “Ten years ago, it was the wrong timing. But a mutual friend was like, ‘Oh, Matt says hi.’ Then it was an easy text over Christmas and we haven’t stopped seeing each other since,” Burke recalled of how they reunited. “It’s like we never missed a day, but it just feels so right this time.” She added thatm although the relationship didn’t work out previously, she had faith it would now because they are “older, wiser—and a lot older.” She also gushed, “We feel so lucky, at least I do. You know, you get a second chance at something.”

In the almost ten years they were broken up, it is almost amazing they didn’t end up with anyone else. Burke dated restaurant and nightclub owner JT Torregiani for awhile and things seemed to be getting serious before they split in May 2015. Meanwhile, Matthew Lawrence was linked to model Laura Jayne New from 2013-2015, and after Burke and Lawrence got back together, the dancer said it was amazing they spent so much time apart and didn’t end up together sooner or with other people. “We never ran into each other over the past 10 years, not even once, which is crazy because we live maybe 15 minutes away from each other,” she said. “I thought he was in a relationship or married at this point.”

After laying low for the first few months of their reignited romance, the two made it known they were back together when they shared sweet snaps from a vacation together in the summer of 2017 and attended their first red carpet event as a couple again in April 2018. Although the two still weren’t commenting on their relationship too much at the time, someone close to Burke did say, “I’ve never seen Cheryl so happy and so at peace. Matt is a wonderful presence in her life and I can see this being it for her.” They later opened up about being together again, and Lawrence said a key to their relationship was their friendship.  “I think it’s because we’re really good friends and that’s where it all starts. I think we have really good companionship and I think we just built from there.” He added, “That’s the most important thing. We can actually hang out. When we go away together, we really enjoy it. When it’s just the two of us, it’s the best.”

After the two got back together in early 2017, Burke hinted that things were better than ever even after being together for only a few months when she said in a September 2017 interview that they were already discussing marriage. “I would love that! We talked about it, so whenever the time is right. Hopefully sooner than later!” she said of marriage in their future. She didn’t have to wait too long because on May 3, 2018, after Burke’s 34th birthday celebrations — Lawrence popped the question! The two were watching the sunset from their hotel room in Laguna Beach when the actor decided it was the right time. “I handed her this note that said, ‘I will love you always and forever,” Lawrence recalled. “That’s what’s engraved in this ring — I want you to marry me.” Burke said it was absolutely “perfect” and not long after shared a photo of her gorgeous ring with the caption, “OMG! So far so good for 34! #amilliontimesyes #imengaged#herecomesthebride.”

After the pair became engaged in early May, they wasted no time in setting up the wedding. “We definitely want to get married as soon as possible,” Burke revealed, adding that they were looking at a destination wedding but hadn’t picked a place yet. Lawrence mentioned that they were drawn to a private island in the Philippines called Amanpulo. “We went with Cheryl’s family over the holidays and it’s just such a magical place,” he explained. On May 23, 2019 the duo ended up marrying at the Fairmont Grand del Mar in San Diego, California. Burke wore a gorgeous Romona Keveza gown with a six-foot train while actress Leah Remini served as her matron of honor and her sister Nicole and Dancing With the Stars’ pro Kym Herjavec were both bridesmaids. Lawrence’s two brothers Joey and Andy stood beside him as his two best men.

With Burke’s busy schedule and being apart from each other for 10 years, what the celebrity couple loves most is just being together at home, and they don’t strive to be in the spotlight. “We’re just like a normal couple. We just sit on the couch and sometimes stay up really late continuing to watch whatever we’re watching,” Burke said of their relationship. “He’s an actor, he’s been in the spotlight as well, which makes our relationship so much easier because he understands the rollercoaster ride that we both are on. Work is not consistent for either of us… With that you need to have a stable relationship or someone that understands what you’re going through.” She added, “We’re usually on the couch. I’m like top knot, no makeup on and ordering food and watching Homeland,” and joked that, ironically, when they aren’t being homebodies their second favorite thing to do is travel. “We’ve actually traveled all over the world. Other than watching Homeland, we love to travel.”

At first, Burke said she was in no rush to have kids but, after their reconciliation, she seemed to have changed her mind. In May 2017, only months after they got back together, Burke was not only sure that Lawrence was the one, but was already discussing plans to start a family with him.  “I’m not getting any younger. We want kids and all of that, so we’ll see what happens,” she said before she knew an engagement would be coming a year later. She added that they already knew how many kids they wanted, and some fellow Dancing with the Stars pros gave her baby fever, saying, “We’re going to try maybe for three, but I think right now one healthy one would be great. We really want to do it right. We want to do the steps of being engaged, moving in together, getting married and having kids. He’s 37, I’m 33, so it’s about that time. And of course I see Maks [Chmerkovskiy] and Peta [Murgatroyd] with their baby and everyone is having babies right now. So I’m like, ‘It’s time for me to have one!'”

It has been abundantly clear that it is Burke who speaks out more about their romance and relationship and Lawrence, but keeping things private is one of the things she admires most about him! “This is the reason why I love him so much because he is as normal as any guy that you would meet that’s not in this business,” she gushed. “He’s not really into social media, he loves his animals so much. I mean, he lives in the same house that he lived in a decade ago when we were dating and he turned his whole backyard into a mini zoo. He’s got his iguanas he raises, his tortoises, a billion fish.”