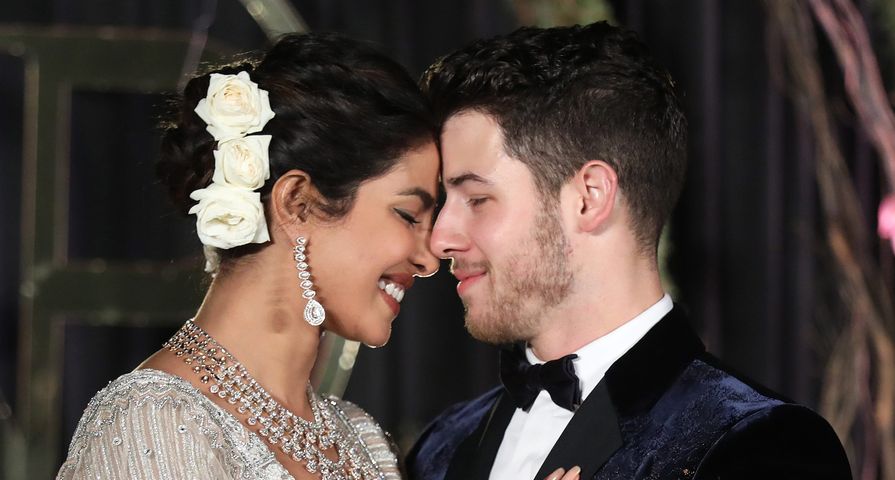 Sometimes celebrity relationships seem to really come out of nowhere and that was certainly the case for Nick Jonas and Priyanka Chopra. The unlikely celebrity duo’s whirlwind relationship took over the headlines for much of 2018 and since they kept things under wraps for so long, many don’t know the love story between the pair. From a Twitter direct message to one of the most extravagant celebrity weddings of all-time, here is everything you never knew about Nick Jonas and Priyanka Chopra’s relationship:

Nick Jonas and Priyanka Chopra’s love story actually began back in the fall of 2016, when like any modern relationship, Jonas took to social media to get Chopra’s attention. Apparently Jonas had texted Chopra’s Quantico co-star Graham Rogers saying, “Priyanka. Is. Wow.” He then reached out to her on Twitter on September 8, 2016, writing in her direct messages, “I’m hearing from a few mutual friends that we should meet.” Chopra responded that same day saying, “My team can read this. Why don’t you just text me,” and she gave Jonas her phone number, which was just the beginning of something so much more.

After beginning to text in 2016 after the Twitter exchange, Jonas said that their text messages were “friendly with an eye toward flirtation,” but it wasn’t until the 2017 Vanity Fair Oscars party that the pair actually saw each other in real life, and Jonas got down on one knee right there. Jonas explained he was getting a drink at the bar when Chopra swept through looking drop-dead stunning in a Michael Kors Collection dress. “And I put my drink down,” Jonas told Vogue, “get on one knee—this is in front of a bunch of people—and I say, ‘You’re real. Where have you been all my life?’ Like, loud.” Unfortunately Chopra is a very busy woman and already had a car waiting for her to catch her flight to India, but the pair convinced Chopra’s manager that the star could stay for one drink with Jonas.

While the pair continued texting, they wouldn’t see each other again until nearly three months later when Ralph Lauren, who didn’t know anything about the blossoming relationship between the two, invited them both to wear his designs as his guests at the 2017 Met Gala. A week before the Met Gala, the pair were able to meet up again for drinks in N.Y.C. at The Carlyle. This time however the night didn’t end with one drink and Chopra invited Jonas back to her apartment where he met Chopra’s mother who was at home watching Law & Order in her nightgown. “We hung out for a couple of hours. He patted my back before he left,” Chopra told Vogue about the disappointing end to their “first date.” Jonas added to the publication that Chopra is still upset that he didn’t try to kiss her, but added, “Your mom was in the house! I thought it was a respectful first night.” Chopra retorted, “It was too respectful if you ask me.” According to Nick Jonas’ brother Joe Jonas, both Nick and Priyanka had an amazing time at the Met Gala and the after parties.  “I think she kind of knocked him off his feet. He was just this little puppy dog,” Joe said and recounted a photo he took of Nick at the end of the night, at the Carlyle: “He’s sitting on the floor. And Sophie and I were just laughing at him. We’re like, Look at this little smitten, drunk kid right now.”

Since Priyanka Chopra and Nick Jonas are both big stars, they wouldn’t see each other again for an entire year after the 2017 Met Gala. They ran into each other on the red carpet for the 2018 Met Gala, and later that month Jonas invited Chopra on a date to see a live performance of Beauty and the Beast. That month it seems their flirtatious friendship began to evolve into romance and before long media outlets picked up that the two had begun to date. It was during their Beauty and the Beast date that Jonas realized he couldn’t let her go. “She walks into the Chateau, and I feel an overwhelming sense of peace and understanding about this next chapter of my life,” he revealed. The next night they took in an L.A. Dodgers game and Jonas called his mother to inform her he knew he was gonna marry Chopra. As for Chopra, she said that it turned from flirty friendship to something more while they were on a date in L.A. She revealed that Jonas turned to her and said, “I love the way you look at the world. I love the drive you have.” “As a girl, I’ve never had a guy tell me, ‘I like your ambition,’” Chopra explained. “It’s always been the opposite.”

It only took one month for the couple to go from liking each other to in a very committed relationship and in early June, 2018, Chopra met the entire Jonas family when she joined Nick for his cousin’s wedding in Atlantic City. Right away those close to the Jonas Brother singer knew that this relationship was different. “He’s dated a lot over the last couple years but it’s never been anything serious, so this is a big step,” a friend told People. Later that month things got even more serious when the pair jetted off to India so that Nick could meet Chopra’s family.

June 2018 was a big month for the couple as they met each other’s families and finally confirmed everyone’s suspicions by posting about each other on social media. Meanwhile, they were spotted out on many dates and outings which was a huge step for Chopra. “I’ve had that rule my whole life,” she explained. “Never publicly acknowledge a relationship. Ever. What is happening? I’ve not known myself like this,” she said when Jonas was mentioned. “This guy turned me into such a girl! If I could blush, I’d be tomato red right now.”

Only one month after going public with their relationship, Nick Jonas and Priyanka Chopra were engaged after he proposed during a trip to Crete for her birthday celebrations. Back in June, 2018 Jonas shut down Tiffany & Co. in London with his brothers so that he could pick out the perfect ring for the stunning actress. While celebrating in Crete, Jonas waited until shortly after midnight so that the engagement date would have a separate date from her birthday, and got down on one knee and proposed. “I got down on one knee, again, and I said: Will you make me the happiest man in the world and marry me?” Jonas revealed of the big moment. “No joke—she took about 45 seconds. Forty-five seconds of silence.” (Chopra says she was speechless.) Jonas pressed on. “I’m going to put this ring on your finger now unless you have any objections.”

Less than five months after Jonas proposed, the pair were married in one of the most extravagant celebrity weddings of all-time! The two stars wed on December 1, 2018 at Umaid Bhawan Palace in Jodhpur, India, in an entire weekend packed with wedding festivities which included both a traditional Indian and traditional Western wedding to honor both of their cultures and beliefs. Their wedding was a four-day event and featured 225 guests, and they couldn’t have been happier that they were able to join their families and cultures in such an epic celebration of their love. “I love that our wedding was a religious mash-up,” Chopra said. “We took beautiful traditions that we both grew up with and personalized them in a way that made sense for us. It’s been incredible to find the commonalities between our beliefs and figuring out how to blend them in a respectful and meaningful way.”

While age gaps are nothing new in relationships including celebrity ones, many are surprised to find out that Priyanka Chopra is nearly 10 years and two months older than her husband Nick Jonas at 36 and 26 years old respectively. Sources close to Jonas say that the singer has always been attracted to women older than him, and for their joint interview for Vogue shortly before their wedding Chopra joked, “I call him Old Man Jonas.”

3. Match Made in Heaven

While Nick Jonas knew almost immediately that Priyanka was the woman he wanted to be with, apparently it was just as obvious to Nick’s brother Joe. “Seeing Nick’s face when he first met her, and the way he talks about her, and then getting to meet her and seeing what an amazing person she is, I knew right away that they were a match made in heaven,” Joe Jonas said in an interview after the wedding. He sweetly added, “I kind of blacked out for a minute because I was overwhelmed with emotion. This is not only my brother, best friend, and to see him marrying his dream girl, there was a lot of tears the whole weekend and a lot of smiles. I have [the toast] on paper, which is the most important part. It was a special week.”

When Nick Jonas married Priyanka Chopra he also had an entire country fall in love with him, and while he is now Priyanka’s husband he is also India’s “National Jiju.” The national nickname is a play on the Hindi word jiju, which means “brother-in-law” or, more precisely, “sister’s husband.” Chopra revealed that Nick takes his title very seriously and he worked very hard to be able to honor her and her culture during the Indian wedding ceremony. Nick did the Hindu prayers,” Chopra said. “The prayers are in Sanskrit. Even I can’t say them. But he did it in Sanskrit. The Indians were so impressed with their National Jiju.”

As two very busy stars, fans can expect to see Nick Jonas and Priyanka Chopra everywhere, but things will change slightly now that they are married. The pair want to double down on their philanthropy and of course hopefully start a family. “My ultimate dream is to have kids,” Chopra has said in the past. “As many as I can.”