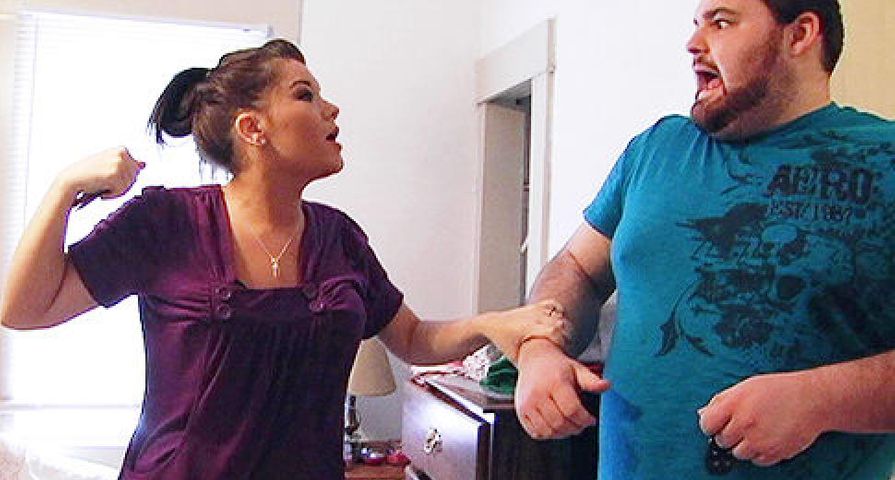 The MTV series Teen Mom offers a lot in the way of reality TV drama. Not only did these girls start off by being featured on another MTV series, 16 & Pregnant, but they rose to fame through the struggles of raising a baby as only teenagers themselves. From relationships with parents to relationships with their baby’s father, to relationships with each other, there have been many opportunities for fights and feuds to abrupt, and they have countless times. From social media spats to face-to-face confrontations here are Teen Mom‘s 10 biggest feuds.

Kailyn Lowry was featured on 16 & Pregnant with her then-boyfriend Jo Rivera and together the two had a son, Isaac. Things didn’t work out and, while the two have fought many times, it is Kailyn’s fights with her now husband Javi Marroquin that have gotten the most intense. The two welcomed a son, Lincoln, and it didn’t take long for Kailyn’s defensive nature to become a problem and the two started bickering frequently and at one point became physical. In one argument Kailyn and Javi were fighting about having the dogs in the house and, after Javi refused to have them outside, she started a yelling match, which ended in her actually slapping Javi around the head. These two continue to attend couple’s therapy and say everything is fine between them, but the most recent episodes of Teen Mom 2 have shown nothing but fighting between the two.

Chelsea Houska has done a very respectable job keeping her life together after having her daughter Aubree with the reckless and irresponsible Adam Lind. Luckily the Teen Mom 2 star has always had a strong support system in her family, especially her father Randy, and he has had her back in her constant battle with Adam. While Chelsea and Adam have had it out a couple of times, Randy has had his say too and the pair have even faced each other in the end of the season episodes with Dr. Drew.

Maci Bookout is one of the original Teen Mom‘s and is another one who has a really bad relationship with her son Bentley’s father, Ryan Edwards. Edwards made it very clear almost immediately after Bentley was born that he was not ready for parenthood and, unfortunately, has not progressed much further in the five years since. He has continuously been extremely mean and rude to Maci, leading to some major fights.

Barbara Evans may fight with her daughter Jenelle Evans A LOT but that does not stop her from coming to Jenelle’s defense whenever she feels is needed. Jenelle Evans’ story from 16 & Pregnant and through six seasons of Teen Mom 2 has gone from bad to worse and back out again, mostly due to her severely tense and many times abusive relationships with boyfriends, fiances and husbands. At one point, things looked dire for Jenelle when she was dating Kieffer Delp who ended up being the catalyst that got Jenelle addicted to heroin. For obvious reasons, Barbara couldn’t stand him and there ended up being some super explosive fights between the two. The same goes for Barbara and Jenelle’s most recent boyfriend Nathan Griffith with whom she had her second child, Kaiser.

As to be expected, Jenelle Evans and Farrah Abraham appear a lot on the list of feuds, so it isn’t surprising that the two have fought with each other. With Evans being from Teen Mom 2 and Abraham being from Teen Mom OG, the two never were on the same set together but that didn’t stop them from fighting over social media. The two have taken aim at each other several times over the years; Jenelle has claimed that Farrah staged a relationship to be on Couples Therapy; Farrah has criticized Jenelle for having another child; and the insults that have been thrown out between the two include, but are not limited to, “Dumba-s,” “fake b–ch” and “white trash.”

When Jenelle and her mother are getting along and not fighting it is only because Jenelle is too busy fighting with her significant other, which also happens to be a lot of the time. Very loud, intense and dramatic fights are Jenelle’s speciality, something her ex-fiance and baby daddy, Nathan Griffith, is also skilled at. The two have had it out many a time and are no stranger to domestic violence calls in many of her relationships. In a short span of time both Nathan and Jenelle were arrested on domestic abuse calls after Nathan tried to grab the ring from Jenelle’s finger and when Jenelle scratched him when he tried to see her phone. In one of their most recent fights, he also used the “trash” insult: “You’re trailer trash, You’re not special. Why would I have anything to do with you?”

Source: MTV
Everything To Expect From Teen Mom OG Season 7B

Catelynn Lowell and Tyler Baltierra have been together since they were in seventh grade and, at 16 years old, when they got pregnant, they made the decision to give their daughter, Carly, up for adoption. The pair were recently married and worked relentlessly to build a better life before having another child but that didn’t stop Farrah from once again voicing her opinions about it: “I wish them all the best, but it does make me very sad to still see them make poor choices.” Catelynn then took to her Twitter firing back with, “Huh bad choices?!? Hahaha I didn’t make a so called ‘sex tape’ but WE make the bad choices? Seriously [Farrah’s] comments made my night!!” The feud then came to a head when both were invited to appear on Couples Therapy, which resulted in Farrah crying about her own mistakes and things seemingly being smoothed over.

Teen Mom OG season six threw a curveball into the show a few episodes in when producers announced that they were bringing Farrah Abraham back to the show. While Catelynn and Amber did not have a problem, Maci Bookout had a major problem with it and told the show’s producers she quit because the only reason she signed on to do another season was because Farrah was not going to be on it. Maci was not a fan of having her son on the same show as a “porn star” and did not think her son needed to be associated with that. When Maci and Farrah had it out on the show, Maci ended up walking away because there was no talking sense to Farrah, and while Maci has agreed to be on the show, she stuck to her stipulation that the show could only film her and her son Bentley would no longer appear while Farrah is part of the cast.

Through 16 & Pregnant and Teen Mom 2, there has been continuous fighting, bickering, and shouting between Jenelle Evans and her mother, Barbara. When the two aren’t fighting with Jenelle’s boyfriends, they are fighting with each other and it seems almost every episode features a Jenelle screaming match. They have both said some really hurtful things to each other, but Jenelle really goes for the throat with her mom which is really surprising as Barbara has stepped up and raised Jenelle’s son Jace after she signed custody over to Barbara because it was very evident she was in no way ready to be a mother or guardian. More than once she has gotten right in her mom’s face and way too often she screams, yells and curses right in front of Jace and know her new baby, Kaiser. When it comes to reality TV drama, Jenelle has more than enough for the entire cast.

From this show we have learned that rarely, if ever, do couples who get pregnant as teens stick together and that, in many cases, the relationships go downhill rather quickly. While a lot of the other couples get into some pretty serious shouting matches and say nasty things to each other, things got physical between Amber Portwood and her ex Gary Shirley. In the midst of one of their screaming fights, Amber attacked Gary and ended up landing a punch to his head. After the fight, she was charged with two felony counts and one misdemeanor for domestic violence and battery. While the punch was seen and aired on MTV, there was another incident in which Amber apparently “choked, slapped, punched and kicked” Gary and, while their daughter Leah was present for the other incident, she was not there for that one. The two have continued to fight over custody of Leah, but after jail time and lots of anger management, Amber has not physically attacked Gary again.