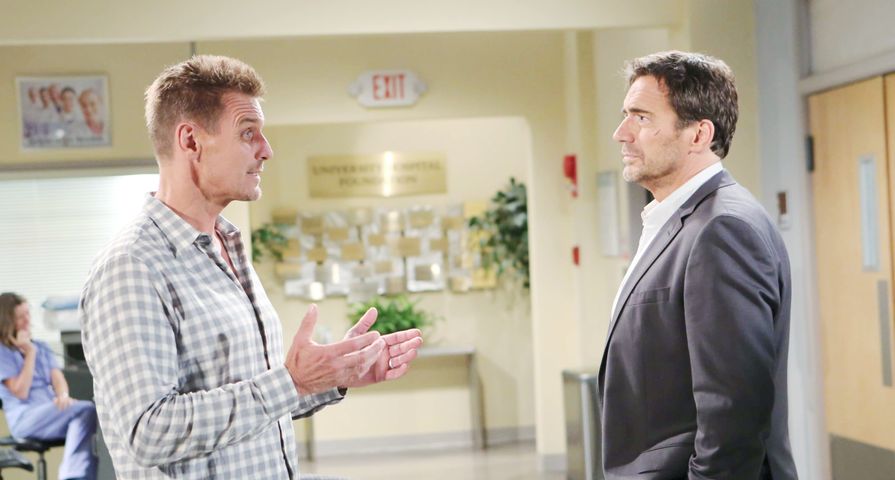 Bold And The Beautiful: Spoilers For August 2019

Emotions run high when a battle between Ridge, Thorne and Bill leaves a life hanging in the balance this week on the Bold And The Beautiful (B&B). Also, in what looks like the start of an epic new feud, Pam and Quinn argue about whose portrait will hang on the wall during Pam and Charlie’s wedding. Learn more in the B&B spoilers for the week of October 22, 2018.

It was obvious Quinn was against Pam and Charlie getting married at the Forrester estate the moment Pam suggested it. She hinted around that the pair could have a destination wedding, and even went so far as to suggest they get married at Medieval Knights. This week, she’ll be even angrier that Eric has agreed to host the wedding. Then, Quinn and Pam will end up playing tug of war with Stephanie’s portrait and Eric will be forced to step in as mediator between the two women. He will also face his own thoughts about the portrait.

Quinn will make a comment about Pam’s volatile past this week and spoilers indicate Pam will threaten Quinn and tell her she better not wreck her wedding plans. Although Pam does have an erratic track record (especially when she’s off her meds), viewers have been quick to recall many of Quinn’s past sins. These dirty deeds include pushing Ivy off a bridge in Paris, attempting to kill her ex-husband Deacon by pushing him off the side of a cliff, threatening Liam with a sword and later kidnapping him, among other crimes.

Things Only The Biggest Bold And The Beautiful Fans Would Know

Big Brother (BB) contestants Tyler Crispen and Brett Robinson will appear in an episode of B&B this week. Crispen, who had a hand in most of the evictions on this year’s BB, won America’s Favorite Houseguest but finished the game as runner-up to Kaycee Clark. Tyler and Brett will visit Quinn, presenting her with gifts.

Robin Givens returns to B&B as Hope’s obstetrician, Dr. Phillips, this week. Hope and Liam are at the hospital and will ask the doctor to reveal the gender of their unborn child. The couple will be excited about their future as a family. Liam’s joy will be short-lived, however, when he hears disturbing news about his father.

The Needle and Thread Brothers gang up on Dollar Bill on Monday, and it’s going to get ugly. On Friday’s B&B, Ridge and Thorne paid Bill a visit at his mansion, and Ridge told Bill to “stay away from Brooke, or I’ll put a stop to it, once and for all.” “What are you gonna do?” Bill replied, smirking. “Stitch me to death?” Previews for this week indicate Bill will throw the first punch and an all-out brawl will occur between the three men. Bill is shown careening over the balcony and landing on his back, unconscious and with blood on his face.

The Dressmaker and his Milquetoast Mayonnaise brother will try to explain to Katie, Brooke, Wyatt and Liam what happened to put Bill in the hospital and it’s not going to go well for them. In a preview, Ridge informs Katie and Brooke: “I hate him now more than ever.” Then, when he’s looking at Bill lying on a hospital bed (who let Ridge in Bill’s room?), he mocks him, telling Bill: “this was inevitable.”

Both Katie and Brooke will be shocked by the actions of their husbands. It’s possible this incident could put an end to the Bridge marriage for good, but, at the same time, will it lead Brooke to the realization that she still loves her stallion? It could also put an end to Katie and Thorne’s marriage, especially when Will finds out his new step-father is partially responsible for putting his father in the hospital. Spoilers show Katie will confront Thorne about the chance of Will’s father dying and his part in it. After all, it was Thorne’s idea to pay Bill a visit that caused the whole mess in the first place.

3. Keystone Cop On The Case

Detective Sanchez is on the case, meaning this one will likely be solved as quickly as when Bill was shot this year. Then again, would Lieutenant Hot Dog do any better? Spoilers indicate Sanchez will interrogate Ridge and Thorne at the hospital. In the preview, he asks Ridge: “Did you push him from the balcony?” Many viewers are hoping to see Ridge taken away in handcuffs but it’s likely the detective will conclude it was an unfortunate accident, for now. But if Bill wakes up, all bets are off.

Bold And The Beautiful Storylines That Annoyed Fans

Like his brother Ridge, Thorne somehow manages to sneak into Bill’s hospital room, which begs the question: how bad is the security at this L.A. hospital? Rumor has it, he will enlighten Bill with some up-to-date information. But what is it? Thorne despises Bill almost as much as Ridge does, so it’s unlikely he’ll be encouraging him to pull through.

Bill will be clinging to life all week, spoilers show, as he is critically injured in the fall from his balcony. Katie will be at Bill’s beside and will tell him his son needs him, so he needs to “fight hard” to live. Liam will also pay a visit to his unconscious father’s hospital bed after he and his brother Wyatt hear a grim prognosis from Bill’s doctor. Bill is a fighter who endured a shot in the back earlier in the year, but he will still be in a coma by week’s end. This will leave viewers wondering, will Bill survive?