Bold And The Beautiful Spoilers For The Week (November 25, 2019) 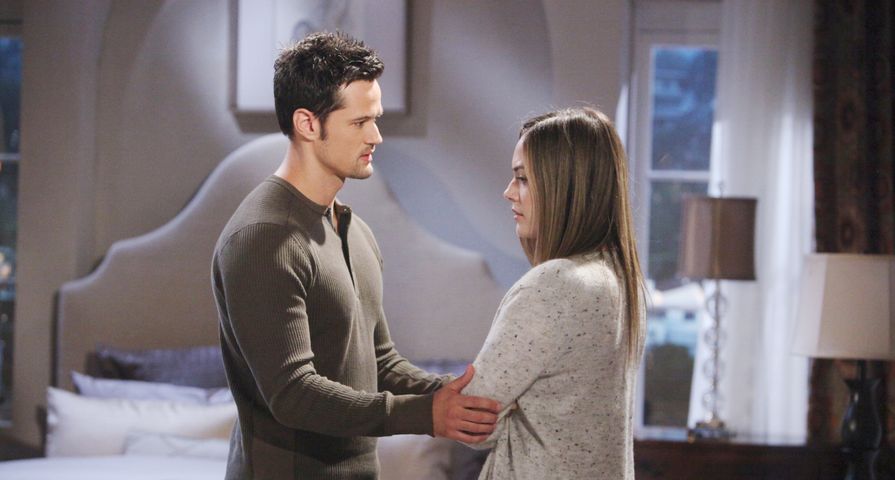 This week on the Bold & The Beautiful (B&B), Brooke and Ridge’s marriage reaches an emotional impasse. And Hope will confess to Liam that she had believed Thomas had met his demise at her hands. Also, Sally will slip-up when she and Wyatt talk about their wedding plans. Plus, a sneak peek at next week. Learn more below in the B&B spoilers for the week of November 25, 2019.

B&B will be pre-empted on Friday, November 29 for NCAA:SEC football. There are also reports stating that CBS has scheduled a repeat episode of the sudser on Thursday, November 28, which is the American Thanksgiving holiday. However, viewers have missed several shows in the past two weeks due to the impeachment hearings, so it’s possible B&B may air a new episode on November 28.

Spoilers tease that viewers can expect another classic Thomas and Brooke battle this week. Brooke will be stunned to see that Thomas is actually still alive and he will take the opportunity to taunt his stepmother. Thomas knows Brooke was keeping the truth about his apparent demise from his father Ridge. He will demand that she come clean with Ridge or he will do it himself.

Thope will tell Douglas this week that Hope is now officially and legally his new mother. The little boy will be overjoyed. He’s already been calling Hope mommy, so it won’t be much of a transition for him. But will Douglas ask if that means the three of them will now be a family and will live together and if so, how will Hope react?

8. Ridge Walks Out On Brooke

Stick a fork in the Bridge marriage, it’s nearly done! Ridge will be incredulous when he finds out Hope was trying to tell him that his son had met his demise and Brooke stopped her from admitting the truth. Brooke will try to explain to Ridge that she was just trying to protect her daughter, much like he protects his son. Of course, both Brooke and Hope thought Thomas had passed away. And although Thomas is just fine, and somehow miraculously survived falling into a vat of acid without a scratch, the fact that Brooke would keep such vital and life changing information about his son from him will be enough justification for Ridge to walk out on Brooke.

Brooke will turn to Liam and Hope after Ridge leaves. She’ll tell them both about her conversation with her husband and how he’s unable to excuse her for keeping the truth from him about what she and Hope believed had happened to Thomas. But Brooke won’t blame herself for her marital problems, she’ll place the fault solely on Thomas. She believes that if he’d just revealed himself in the first place, her marriage would still be intact. On the flip side, Ridge will confide in Shauna that his marriage is standing on the edge of a knife, and he’ll tell her all the details of Brooke’s deception. Other spoilers show that Shauna will feel bad for Ridge but will tell him she’s not unhappy his marriage to Brooke is crumbling.

None too happy about Thomas’ quid pro quo with Hope, Ridge and Steffy will chastise Thomas this week. They will both still be stunned that he suggested to Hope that he would give up partial custody of his son Douglas for a night with her. It’s expected they will also give him some grief about leaving his son alone in a storage room at Forrester and letting Hope think he’d met his demise.

Spoilers tease that Quinn will see Shauna and Ridge kissing this week. Rumor has it, she will then pressure Shauna to tell all about what led to the kiss. Quinn will also ask her where she thinks her relationship with the Forrester designer is headed. Shauna will likely still be gushing and will tell all to her best friend. But will Quinn encourage Shauna to continue her pursuit of Ridge, or will she advise her friend to back off for the time being?

Liam will make his triumphant return to Spencer Publications this week. He will be greeted by his father Bill, his brother Wyatt and Bill’s right-hand man Justin. Bill’s executive assistant Emmy will also be there to welcome Liam back to the Spencer fold. Emmy’s portrayer Sheryl Underwood returns to B&B for a guest appearance on November 27.

Speaking of Liam, Hope will tell him this week about how she manipulated Thomas’ feelings for her so she could get joint custody of Douglas. She’ll also fess up about how she believed Thomas had met his end at her hands in a vat of hydrofluoric acid at Forrester Creations. How Liam will react to this news remains to be seen. He will obviously be stunned but will he be understanding towards Hope, or will he view her actions as unforgivable?

Rumor has it, Sally will make a blunder while she and Wyatt are discussing their wedding plans. Many viewers are speculating that Sally had been briefly married once before and will slip-up and mention her first marriage. It’s expected that Wyatt will be dumbfounded by the news if this spoiler turns out to be true. Other speculation suggests that Sally could be pregnant and somehow blurts the news out to Wyatt.

Due to network pre-emptions because of the impeachment hearing coverage, the annual B&B Thanksgiving celebrations may be pushed to the week of December 2. Spoilers tease that Liam and Hope will spend baby Beth’s first Thanksgiving together with Hope’s new son Douglas. Also, the Forrester family’s annual Thanksgiving feast will take place. Both Ridge and Shauna will be in attendance, but will Brooke also be there this year? And Thomas will try to convince Hope to work with him at Forrester Creations. But will Hope be open to the idea? Keep watching to find out!