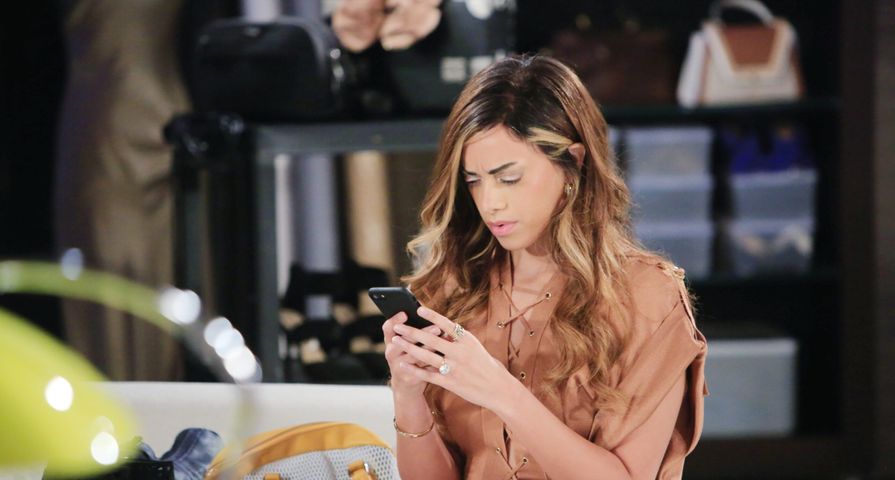 Ridge will be suspicious of Zoe’s true feelings for Carter when he sees her flirting with Zende, coming up on The Bold And The Beautiful (B&B). Also, Brooke will blame Steffy when she finds out Steam slept together and Steffy may be carrying Liam’s child. Learn more below in the B&B spoilers for the week of January 18 to 29, 2021.

Young And The Restless’ (Y&R) Summer will imply to Wyatt that’s she looking for information on Sally. When she met with him for lunch on the Y&R, she told him Sally said hi. He made a face but told Summer he only wishes Sally the best. However, when Summer discussed the conversation with her boyfriend Kyle, she told him she suspected Sally “has a juicy secret that’s just waiting to be revealed.” But unfortunately for Summer, when she meets with Wyatt again, he will shut down all her attempts at gleaning information on her rival.

On the other hand, on the B&B, Flo will overhear Summer dropping Sally’s name to Wyatt. She’ll wonder if Summer is looking for a way to take Sally down and she’ll approach her. Flo will divulge to Summer that if she wants some dirt on the fiery redhead, she can tell her everything she needs to know.

Hope will accuse Steffy of knowing who her baby’s father is. Steffy will tell her she’s being ridiculous, as she only just found out she was pregnant and hasn’t even taken a paternity test yet. Then Hope will take the issue even further and tell Steffy this was her plan all along, to get pregnant by Liam again. Of course, Steffy will deny it.

Rumor has it, Finn will put Steffy in the hot seat when he asks her who she hopes the father of her unborn baby will turn out to be. Without question, she’ll tell him she’s praying he will be the daddy. She’d love nothing more than to have a family with him and she’ll continue to hope her unborn child will turn out to be his.

Steffy will get a paternity test this week, which should be a breeze since it won’t be her first. Back in 2017, she had to secure a paternity test because she wasn’t sure if Kelly’s father was Liam or his father Bill. Steffy will experience a strong sense of déjà vu, as she’s been there and done this before.

Speaking of Bill, rumor has it he will get emotional when he sees Katie in the coming weeks. He regrets everything he’s done to hurt her during the past year, and he’ll let her know exactly how he feels. Katie wants them to get along, for the sake of their son Will, but will she also start to let her guard down around her ex and let him into her heart again?

Brooke will be angry when she finds out Steffy might be pregnant with Liam’s baby. She will likely blame Steffy for seducing Hope’s husband, instead of laying the blame where it should be cast, directly on Liam. Didn’t Brooke go through this herself when Ridge flip-flopped between her and Taylor for years? Regardless, she’ll also want to console and advise her daughter, but Hope will turn to someone else for comfort.

Spoilers tease Hope will find a sympathetic ear in Thomas. The Forrester designer will overhear a conversation, put two and two together, and figure out that Liam circled back to Steffy again, just as he had said he would. A heartbroken Hope will then confide her deepest fears to Thomas. He’ll know she’s hurting and will do his best to provide a sense of comfort for her.

Hoping to lean on his brother for support, Liam will get the opposite reaction when Wyatt blasts him for sleeping with Steffy. He’ll tell his brother he’s made another fine mess of his life and will ask him how’s he going to get out of this one. Wyatt will be even more stunned when Liam admits that Steffy is pregnant and he could be the father.

Zoe will suddenly receive the missing text from Zende and it’ll turn her whole world upside down. The message asked her to come up with an excuse to leave Carter’s loft and meet him at the office. But she didn’t receive it at the time. Last week, she had a discussion with Zende in which he told her they would never be together. Zoe’s engaged to Carter and Zende said he could never betray Carter. Zoe felt rejected and upset but seeing this text may change everything.

Ridge will pick up on something when Zoe lets her guard down in front of him and openly flirts with Zende. It will concern the Forrester Co-CEO, as his good friend Carter is engaged to the Forrester model. Rumor has it, he may question his COO about his relationship with his fiancé. But will he tell Carter he’s concerned that Zoe isn’t quite as dedicated to him as he thinks she is?

1. Zoe Has Questions For Zende

Zoe will ask Zende why he never fought for her and instead chose to pursue a relationship with her sister Paris. She now knows he had real feelings for her, but did they just disappear? They’ll also discuss her engagement to Carter. But will she get Zende to come clean about the text he tried to send her that never arrived? Keep watching B&B to find out!