Bold And The Beautiful: Spoilers For September 2021 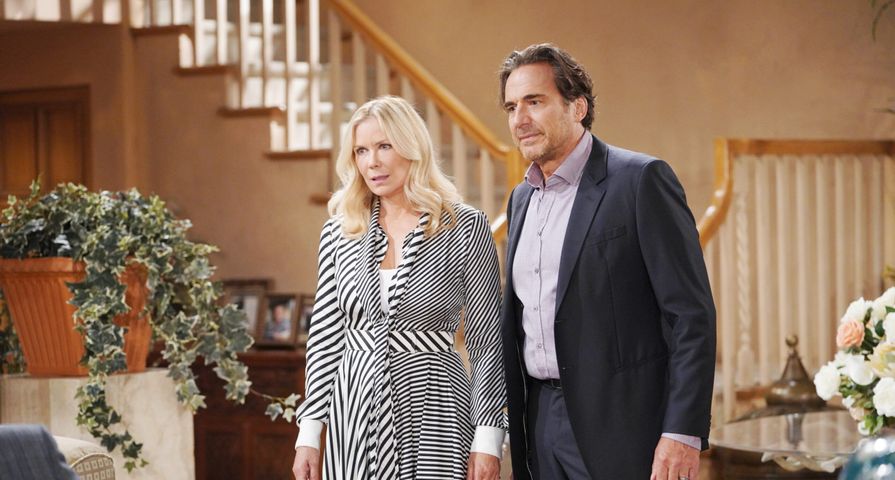 Sheila will faint in front of Finn and Steffy will accuse her of faking an illness, coming up this month on The Bold And The Beautiful (B&B). Also, Eric will eavesdrop on Quinn and Shauna’s conversation and then witness a close moment between his wife and Carter. Plus, will viewers finally see the return of Justin? Learn more below in the B&B spoilers for September 2021.

Justin has been MIA on B&B since he kidnapped Thomas. The last time viewers saw him, he’d offered Ridge a deal. If Ridge didn’t go to the police, Justin told him he’d help him take down Bill. However, will Ridge take him up on it? Aaron D. Spears, who portrays the character, recently posted on social media that he was back on the set filming, but will we finally see his return in September?

B&B spoilers indicate Finn will be forced to deal with his new reality as he moves into the Forrester guest house. He’ll still be torn over his feelings for his birth mother and the mother of his child. But did Steffy make a mistake by kicking him out? Sheila will have even easier access to her son now that he’s not living at the cliff house.

Zende will make it known to Paris that he’s definitely on Team Steffy. He’s always supported his cousin and will continue to do so, especially when it comes to keeping Sheila away from her family. He’ll assume that Paris feels the same. However, Zende will quickly find out that’s not the case. Spoilers indicate Zende will even imply that he knows she has a crush on Finn.

Of course, Paris won’t see it the same way Zende does. She’s on Team Finn, all the way. Paris has been playing coy with the doctor ever since she moved into the cliff house and perhaps now she won’t have to hide her affection for him. She’ll tell Zende she understands Finn’s point of view and that he has the right to see his birth mother. Their differing opinions on the situation will put Zende and Paris at odds throughout the month.

Rumor has it, Liam will hit the roof when he finds out Finn let Sheila into the cliff house and Steffy walked in on the villain holding her son. As per his usual modus operandi, Liam won’t be able to keep his nose out of Steffy’s business. He’ll pay Finn a visit and blast him for putting Steffy and Kelly in harm’s way.

When she hears that Steffy kicked Finn out, Sheila will laugh with glee. Steffy is playing right into her hands without even knowing it. In September, the villain will up the stakes by telling her son she has a life-threatening illness. Spoilers tease she’ll faint in front of Finn, which will surely glean his sympathy.

There’s been a war brewing on B&B ever since Finn walked into his wedding reception with his birth mother Sheila. Since that moment, Steffy has slapped Sheila twice and warned her to stay away from her family. But Sheila being Sheila, Steffy’s warnings will fall on deaf ears. She wants to drive a wedge between Steffy and Finn and she’s done a great job so far. And when Steffy accuses Sheila of faking her illness, things will heat up even more. Sheila is more than ready for a clash, and it may culminate in a classic good-versus-evil battle in September.

Sheila’s goal is to get to know Finn and her grandson. But what does she ultimately hope to accomplish? She’s told her son she wishes she’d never given him up, so does she have some kind of sinister plan in mind for baby Hayes? If the big bad wolf is planning a kidnapping plot, it wouldn’t be the first time. However, mama bear Steffy isn’t going to let Hayes out of her site. So how will Sheila accomplish her goal?

Rumor has it, Sheila may also pop by the Forrester estate, looking for Eric. She’ll have no idea that he’s reunited with Quinn, but she’ll find out soon enough when she comes face to face with her former rival. The last time Sheila was in town, she and Quinn beat the heck out of each other. Quinn will tell her to get out, but Sheila will stay put and insist on seeing Eric. This will anger Quinn, but will Sheila’s stubbornness cause the two women to come to blows once again?

Brooke will find herself plotting against Quinn once again. She’s furious that Eric has taken her back and she’ll do what she can to plant any seeds of doubt in Eric’s mind about his wife. Brooke’s instincts are also telling her that her rival is still hiding something from Eric, which of course she is. Eric has no idea that Quinn was sleeping with Carter the entire time they were separated, but he may become enlightened very soon.

Considering the whirlwind her life has been lately, Quinn will definitely need someone to dish to — and who better than her bestie, Shauna. She’ll give Shauna all the details on her reunion with Eric. However, will she also confide in her friend about Eric’s performance issues and her short-lived romance with Carter, while she and her husband were separated?

B&B spoilers indicate that Eric will eavesdrop on the besties during their private chat. Will these two ever learn to keep their traps shut?! He may even hear enough to wonder if Quinn is still seeing Carter. Eric will also spy on Quarter while they’re having an intimate conversation. But will he suspect that something is still going on between them? Keep watching B&B to find out!