Bold And The Beautiful: Plotline Predictions For August 2021 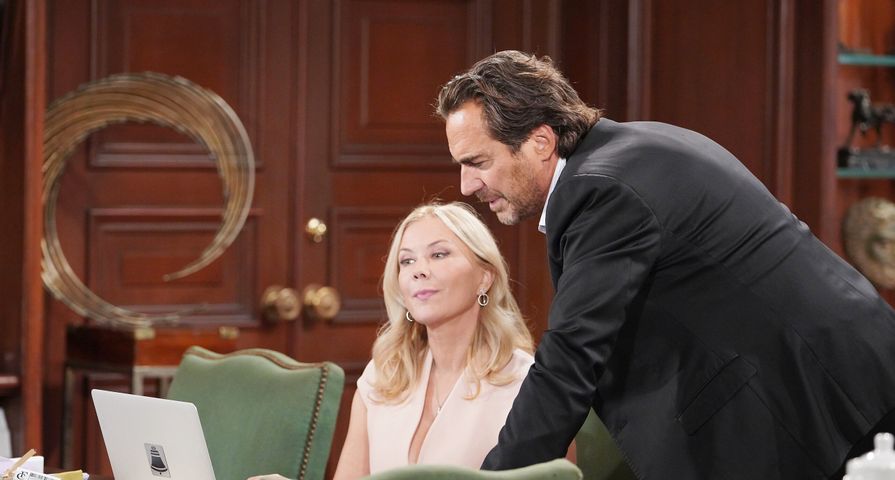 As we say goodbye to July and usher in August, the land of The Bold and the Beautiful (B&B) will continue to heat up with drama! How will Steffy react to meeting Finn’s parents? What sort of secrets lie in his family history? How will Carter manage his affair with Quinn and job responsibilities with Eric? There’s nothing more fun than speculating on storylines! As such, below are some B&B plotline predictions for August 2021!

While Finn’s dad, Jack, is expected to arrive unannounced in L.A. shortly, his mom, Li, will enter the B&B scene in early August. Finn’s about to unload a massive secret on Steffy soon. Will he get into greater detail about this, or will Jack’s arrival stop Finn from telling Steffy something that he should’ve told her a while ago. Could it be that his father was abusive to his mother during their marriage? Could it be that he has a very strained relationship with his parents because of expectations? The list could go on and on.

Could Jack hit it off with Steffy, and Li not approve? Momma bears can be very protective of male cubs! Might Li question everything about how Steffy mothers little Hayes? Could she be old-fashioned and believe that Steffy should take a more active role with Hayes, versus leaving Finn on diaper duty? This could catch Steffy off guard.

Steffy and Finn’s wedding is sure to take place sometime in August. B&B spoilers suggest that a ton of curveballs will be thrown that day. While the wedding will be on, will the two lovebirds get to say “I do”, or will someone stop the wedding? Could it be one of Finn’s parents who cause a scene, or will someone else come into play?

Most B&B fans can agree, it’s completely odd that Paris has moved in with Steffy and Finn — especially with them catering to a newborn, and planning a wedding! The couple has a lot on the go right now! Does anyone else see Paris moving in on Finn (or vice versa)? If the wedding takes place later in August, this gives Paris and Finn plenty of moments alone to get closer and possibly cross a line.

Could Jack or Li do something to push Finn and Paris together? Set up a situation? Drug their son and Paris until they are placed in a compromising position? They might look to ruin his happily-ever-after with Steffy by jeopardizing the wedding. They could be working separately, or together. Maybe one of them feels he’s “rushing” into things, or that Steffy isn’t right for him?

7. Quinn and Carter Keep On, Keeping On

These two haven’t skipped a beat since their affair was exposed. If loving each other is wrong, neither of them wants to be right! Still, they’ll continue sneaking away moments, here and there, in early August, even though Carter could lose his job. It’s almost as if they love playing with fire. These two have chemistry, and it’ll keep burning for most of the month.

Meanwhile, Eric will be pushing for a divorce from Quinn this month. B&B spoilers imply that things will get very messy between these two soon-to-be exes. In fact, it seems as though Eric will lay out some stipulations for the divorce, and Quinn will object. Sounds like typical Quinn; despite ruining her marriage, she wants it to end on her terms.

Could Carter choose to cross an ethical line during divorce proceedings? He technically already is, considering that he’s still sleeping with Eric’s wife. But what if he organizes divorce papers in Quinn’s favor? Could he add something in that she wants added in, or removes something without telling Eric? Could he do this without Forrester figuring out what he’s up to, or finding out in the end — when it’s too late?

4. Carter and Quinn Get Discovered

The way these two continue to jump in the sack together, they are bound to get found out. It seems like there’s a good chance that either Ridge or Brooke could catch the two in a compromising position. If that were the case, it would be the final straw for Eric. Carter would lose his job; however, he’d finally have the freedom to be with the woman he yearns for.

If Carter gets canned from Forrester Creations, could he head to Spencer Publications? Bill might be looking for a lawyer now that the truth has come out about Justin. If it is exposed that Carter and Quinn have continued their affair, Bill may approach the lawyer about a new job. It would be a win-win situation for all three parties involved!

With Quinn out of the way, could Eric and Donna be heading toward a reunion? Donna is certainly catching some feelings and would love the opportunity to be back in Eric’s heart. Perhaps Forrester will wait until the divorce is final before solidifying anything. Speaking of the Logan sisters, what about Bill and Katie reuniting? Sounds like something is in the works.

Brooke seems pretty happy with Ridge right now, but could that all change? After all, she seemed over the moon when a misprint had her role at Forrester Creations listed as co-CEO. As Steffy’s preoccupied with a new baby and wedding, could Brooke cross a line, all in the name of being power-hungry? Could this re-ignite a war between these two ladies, where Ridge is once again stuck between a rock and a hard place?