Bold And The Beautiful: Spoilers For April 2019 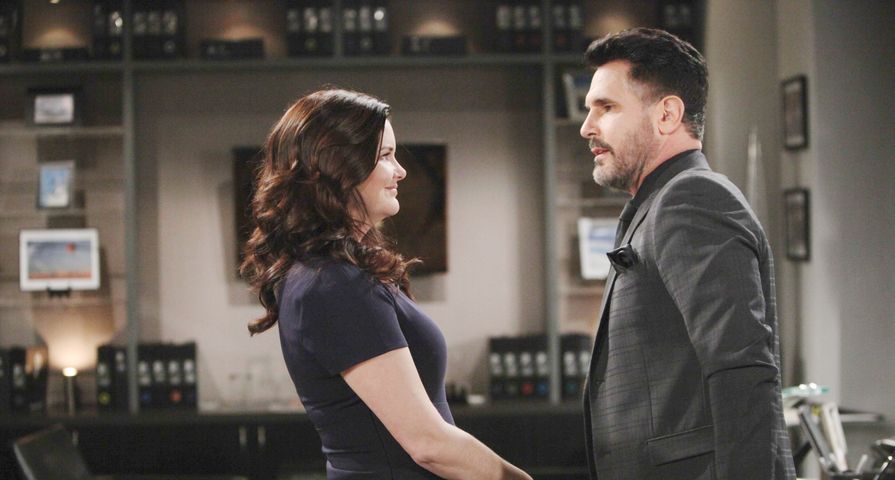 It looks like the month of April will bring stormy weather for Wally but blue skies for Batie on the Bold And The Beautiful (B&B). Also, Flo’s mother Shauna moves to Los Angeles to be with her daughter and Brooke and Taylor’s rivalry ramps up. Plus, there’s trouble ahead for Lope. Read on for more B&B crazy and shocking spoilers for April 2019.

Denise Richards will debut on April 3 as Flo Fulton’s mom, Shauna. She’s come to LA to help her daughter, who has found herself in a very complicated situation. B&B Executive Producer Bradley Bell describes Shauna as “fun loving and hard-working.” Will Flo tell her mother about the baby switch Reese conned her into and her involvement in it?

As Taylor happily admitted to Brooke recently, she did have ulterior motives when she kissed Ridge. Those motives will propel her throughout the month of April, as she continues to pursue her ex-husband, much to Brooke’s concern and dismay. Ridge is still in love with Brooke but still feels affection for Taylor, which the doctor will take advantage of. Not only does Taylor want her former husband back, but she is also hell-bent on her daughter Steffy getting her former husband Liam back.

Ridge agrees with Taylor that Hope, Thomas and Douglas would be good for each other. When he expresses this opinion to Brooke, she will hit the roof. During the month of April, she will accuse Ridge of siding with her rival. She will also begin to wonder why Ridge is backing Taylor and isn’t more supportive of Hope’s marriage to Liam. Will this be the first few cracks in the start of a Bridge collapse?

After calling a temporary truce just after Hope lost her child, Brooke and Taylor will be at war again – and this time it’s no holds barred. Brooke catching Taylor kissing Ridge on the day of Caroline’s memorial, and in her own home, was just the straw that broke the camel’s back. Brooke recently found out Taylor thinks Thomas and Hope would be perfect together and is actively promoting a union between them. This angered her and she will accuse her nemesis of using Steffy as payback for all the problems they’ve had with each other in the past. Although it looks like Taylor could be joining Steffy in Paris soon, it won’t be soon enough for Brooke.

8. Hope Continues To Shut Out Liam

Brooke’s daughter Hope isn’t making the situation any better. She continues to push her husband away, thinking he should be with Steffy, his daughter Kelly and baby Phoebe. She has told him time and again that she doesn’t want to try to have another child and he wants her to change her mind. Hope remains steadfast about her feelings, but will she go so far as to kick The Waffler to the curb this month? If so, April could be a chilly month for Liam.

While Hope shuts out Liam, she opens her heart to Thomas. The pair will share their struggles with grief while connecting on a deeper level than Hope thought possible. She will also become much closer to Thomas’ son Douglas. She and Thomas were shocked when Douglas innocently asked her if she would be his new mommy, but Hope will begin to wonder if maybe the young boy’s suggestion makes sense.

Someone else who will re-connect with Thomas this month is Sally. Rumor has it, she will reject Bill’s offer to head up Spencer Fashions and will accept Ridge’s deal to become a head designer at Forrester Creations. This will stun her boyfriend Wyatt, who will become jealous when Sally starts working closely with ex-boyfriend Thomas, who has returned to LA and is working at Forrester again. Add Flo to the mix and you’ve got big trouble in Wally paradise.

Making things even worse for Wally will be Quinn’s affection for Flo. When she saw Flo again, after all these years, she couldn’t help but embrace her. After all, when Flo and Wyatt were together, Quinn saw Flo as the daughter she never had. “Yes, Quinn loves Flo,” Courtney Hope (Sally) told Soap Opera Digest. “Sally thought she was getting somewhere with Quinn, and then Flo showed up and it was like, ‘Okay, wow.’ This is hard for Sally because Quinn just fawns all over Flo, and it’s a little disrespectful and disappointing to Sally.” Even though Wyatt made his mother apologize to Sally, it will be the start of the unraveling of her relationship with Wyatt.

They say old feelings die hard and it looks like Wyatt’s feelings for Flo will begin to resurface in April. Whether he acts on them remains to be seen. He knows where his mother stands – she’d love to see him get back together with his high school sweetheart. He begins to feel conflicted between Sally and Flo. Wyatt usually wants to placate his mother and her feelings for Flo may help influence his decision.

Justin and Donna will keep playing Cupid for Katie and Bill. Donna saw the heartbreak Katie went through when Thorne just up and left her and she wants her sister to be happy. Justin sees how much Bill loves his son and that his mantra of becoming a new man isn’t all just smoke and mirrors. The pair will continue to push hard for a Batie reunion in April.

Rumor has it, Katie and Bill will do some investigating to find out who their matchmaker is. Wyatt and Sally have joined in on the fun and done a little matchmaking of their own, but the main culprits are definitely Justin and Donna. Will they keep up with their romantic scheming in April and will Batie uncover the truth?

Finally, it looks like Batie fans will see the outcome they’ve been waiting for. Rumor has it, the couple will decide to reunite during the month of April. They’ve been falling back in love with each other for weeks now, with the blessing of their son Will. But trouble, in the form of Katie’s sister Brooke, could be waiting for them just around the corner. Will it be déjà vu for Batie, or will they live happily ever after this time? Tune in to find out!