Home » The Bold and the Beautiful » Bold And The Beautiful: Plotline Predictions For April 2019

Bold And The Beautiful: Plotline Predictions For April 2019 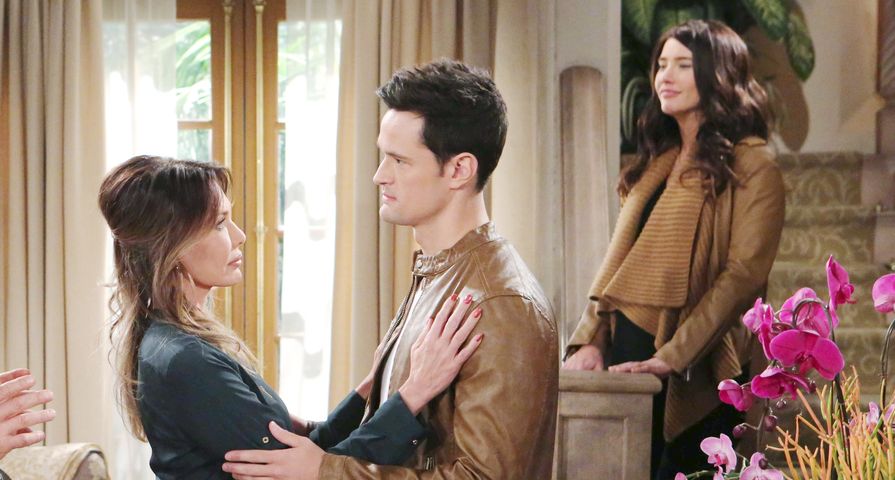 The month of April on the Bold And The Beautiful (B&B) will see some shocking secrets revealed and old rivalries renewed. Viewers are speculating that with the arrival of Flo’s mother Shauna, Flo could find out who her father is, and it may have a huge impact on the Logans. Read on for more B&B crazy plotline predictions for April 2019.

With Flo’s mother Shauna Fulton’s (Denise Richards) debut this month, rumors are rampant that Flo and Shauna will have a familial connection to Hope. Many are speculating Deacon Sharpe may be Flo’s father, which would make her Hope’s half-sister. After meeting Flo recently, Hope expressed to Liam that she felt connected to her. The pair believed the connection was because both women had recently given birth and ultimately didn’t have their babies anymore. But could the connection run a lot deeper? Will Flo find out Deacon is her father?

Other viewer speculation places Flo and Shauna directly in the Logan family. For years, Brooke, Katie and Donna’s father Stephen Logan wasn’t in the picture. He had left their mother Beth and they had no idea where he was. Could he have had an affair with Shauna he’d never told them about? Could Flo be Stephen’s daughter and therefore a Logan sister? Or, could he have had a secret life with Shauna’s mother back in the day and fathered Shauna?

Whether or not Flo finds out Hope is her half-sister (if this ends up being the case), her guilt over the baby switch and her part in it will continue to eat away at her. Sure, it’ll help that her mother is in town and she can confide in her, but she will still feel she should do the right thing by Hope and Liam and tell them their baby is still alive. But will she feel remorseful enough to tell them Steffy’s adopted daughter Phoebe is their child?

Although he’s committed to Sally, Wyatt still has feelings for Flo. But would he take those feelings to the next level? There is some speculation that after an argument with Sally, he will run into Flo and the two will reminisce about the past. In a moment of pure spontaneity, he will take Flo in his arms and kiss her. Happy to oblige her high school sweetheart, Flo will kiss him back and start dreaming of a reunion. Will Wyatt keep his impulsive moment a secret, or will he confess the kiss to Sally?

Rumor has it, Sally will decide to stay at Forrester Creations rather than make the move to Spencer Fashions. It’s the safer bet, considering the way Bill has treated her in the past. It will also bring her into close proximity to her ex-boyfriend Thomas. With Flo’s arrival, Sally is beginning to feel slightly threatened in her relationship with Wyatt. But will her old affection for Thomas start to be rekindled?

It starts to occur to Hope that the only time she feels any joy is when she is spending time with Thomas and Douglas. She starts secretly longing to see Thomas and Douglas and will start making excuses to Liam to spend more time at her mother’s house so she can run into them. Liam will be pleased to see the change in Hope but won’t realize who is causing it.

Things between Hope and Thomas will become a lot more complicated if he finds out Steffy’s adopted daughter Phoebe is actually the daughter Hope thought she lost. There have been rumors and speculation that Thomas will overhear a conversation between Flo and Zoe that may lead him to uncover the truth. But would he be willing to blow his sister Steffy’s life apart by revealing to Hope that Phoebe is baby Beth?

While Steffy is off in Paris, gloriously escaping the drama that is Lope these days, her mother Taylor wants to busy herself doing everything she can to break up Hope and Liam. She has her eyes on the Steam prize and wants to push Hope towards Thomas and Douglas every chance she gets. Thomas has told her the best thing she can do for him and her grandson is to go to Paris to help Steffy with the girls and she agreed, but will she actually leave LA?

There is some speculation that Brooke will hint at blackmail to get Taylor to stay away from Ridge and to stop promoting the union between Hope and Thomas. Brooke knows Taylor’s terrible truth, that she is the person who shot Bill in the back, and she could have her arrested. But will she use Taylor’s shameful secret against her rival?

With Keith Carlos returning as Danny on April 3, there are some theories that tease he and Maya will get together. With her divorce from Rick final, Maya may be looking for a new man in her life and when she starts talking with Danny at Bikini Bar, things will just click between the two of them. If Carter learns about a possible relationship between Maya and Danny, he will be jealous. He’s been biding his time since Maya has returned before making his move on her, waiting until she is fully over Rick. But did he wait too long?

While they’ve been busy playing Cupid to Katie and Bill, will Donna and Justin begin to develop feelings for each other? They used to be married and the pair share a son together, so it seems like a natural fit. Fans are hoping these matchmakers will get back together. Otherwise, did the writers really bring Donna back to the B&B canvas only to play matchmaker for her sister?

Just as Katie and Bill start rediscovering their feelings for one another, there is some conjecture that says Brooke will start regretting her decision to push Bill away in favor of Ridge. After all, hasn’t The Stallion always been her back-up plan? And now that Katie and Bill are starting to fall for each other again, will Brooke suddenly decide she wants Bill back? Stay tuned!