Bold And The Beautiful Characters Who Came Back To Life 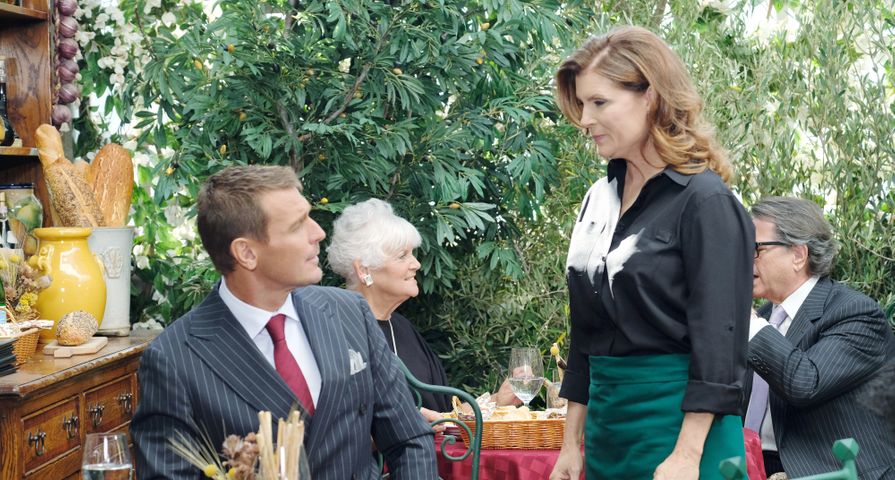 Bold And The Beautiful (B&B) viewers have seen quite a few characters who have defied mortality and come back to life. Several have survived seemingly fatal falls, with one even outliving a dip into a vat of acid. And two characters have got to be part cat because both have already used up a couple of their nine lives. Read on for B&B characters who came back to life.

Baddy Sheila Carter was out hell-bent on payback. She followed the Forrester family to the tropics for Ridge and Brooke’s wedding. In a classic battle, Sheila and her henchmen fought Massimo, Nick, Brooke and Ridge. Sheila knocked Brooke out and threw her into a metal cauldron, which was then raised to sit above a fire in order to broil Brooke alive. She woke up and screamed for Ridge, who saved her but fell into the flames himself. Nick, Massimo, Brooke and Sheila all thought he was a goner. But he showed up alive a few days later, without so much as a sear on his skin.

Little more than 10 years later, Ridge was resurrected once again. As Bill was about to marry Brooke in Dubai, Ridge showed up out of nowhere. He grabbed her arm and dragged her down the beach to a helicopter. Bill’s best friend Justin was piloting it and shortly after he took off, he banked the copter sharply to the right. Ridge wasn’t wearing a seatbelt and he went careening into the Persian Gulf. He was missing for days and everyone thought he had perished. But he miraculously came back to life once again and was found wandering around on the beach a few days later.

Another character who seemingly plummeted to his demise was Deacon. When he discovered that his ex-wife Quinn had kidnapped an amnesiac Liam and was hiding him out in a remote cabin, Deacon threatened to expose her. She lied and told Deacon she was planning to do away with Liam. Instead, she lured her ex to a cliffside and pushed him off into the choppy waters below. Fans thought Deacon was a goner, but not long after, he showed up at the cabin to confront Quinn, alive and well and covered in seaweed.

Taylor’s first miraculous return to life was after she was thought to have passed away in a plane crash in 1994. She somehow miraculously survived but was suffering from amnesia. Taylor had been living on the estate of Prince Omar in Morocco, who had made her his wife. When her memories returned, she escaped Morocco and returned to Los Angeles. Taylor then pretended to be a British nurse, and was caring for Ridge, who was temporarily blind. She finally revealed to Ridge that she hadn’t perished in the plane crash and was still alive.

In 2002, Taylor passed away again, this time in Ridge’s arms, after having been shot by Sheila Carter. But in 2005, a mysterious guest showed up at Nick and Bridget’s wedding and stood at the back of the room. Viewers theorized it was Taylor, but how could it be when they’d seen her body lying in a coffin only a few years before? Then Ridge also began to suspect that Taylor had come back to life, so he dug up her coffin and was stunned to find a plastic dummy inside. Prince Omar appeared at the gravesite and Ridge begged him to tell him if Taylor was still alive. “Yes Ridge, I am,” Taylor said, as she walked towards him.

In 2001, Ridge and Taylor mourned the passing of their 2-year-old daughter Steffy. They were vacationing in St. Thomas and she had fallen off a boat deck into shark-infested waters. But they had no idea Steffy had been kidnapped by Ridge’s former girlfriend Morgan Dewitt. She had planned on making Steffy her own daughter and even dyed her hair red to match her own. Then one day Taylor was at Morgan’s house and she heard Steffy call out for her. She raced through the house and found her daughter. “Oh my god, my baby,” she cried. “Steffy, you’re alive!” But then she was knocked out and also held captive by Morgan. Eventually, Ridge found out and drove his car right into Morgan’s house to rescue his wife and daughter.

Ridge and Taylor’s son Thomas was also thought to have perished, although neither of them knew it. In November 2019, Hope and Thomas were arguing in the Forrester warehouse area. When Thomas tried to kiss her, she pushed him away and he fell over the railing into a vat. She took off an,d when she ran into Charlie, he told her all the vats in the warehouse were filled with hydrofluoric acid. Hope thought that Thomas had met his end and she told her mother, who encouraged her to keep it a secret. Filled with guilt, Hope was going to confess all but then Thomas knocked on her bedroom door. A relieved Hope fell into his arms, marveling that he had come back to life. As it turned out, the acid had already been removed and Thomas had only fallen into a vat of mild cleaning fluid.

Sheila had popped in and out of Los Angeles and B&B’s sister soap, The Young And The Restless’ (Y&R) Genoa City, for years. In 2007, after kidnapping Y&R’s Phyllis Summers and her daughter Summer Newman, Lauren Fenmore shot her, and Sheila was declared deceased. But 10 years later, she inexplicably came back to life, when she appeared in Los Angeles, working as a waitress at Il Giardino.

Eric and Stephanie’s daughter Felicia kept a heartbreaking secret from her family. She had colon cancer and didn’t want anyone to know. But when her boyfriend Nick found her pills to treat the disease, she was forced to come clean. Although she went into remission, her cancer returned in 2007. Her one last wish was to see her parents, Eric and Stephanie, remarry. Once her wish was granted, she passed away. But it turned out she had only gone into a coma and the only person who knew she was still alive was Stephanie. Felicia was sent to a private clinic where she recovered. Her family was thrilled when they found out about a year later that she had come back to life.

Speaking of Stephanie, her entire family had thought she’d passed away when she went missing. They searched for her for months and to no avail. All hope had been lost. But the unlikeliest of people spotted her in a homeless shelter. Stephanie’s rival Sally Spectra found her, and Stephanie’s memories came flooding back. She returned home alive and well shortly afterward, to the delight of her family.

Another character who miraculously came back to life was Macy. In 2000, Macy’s husband Thorne had just broken up with her for Brooke. She asked him to meet her at Big Bear Cabin, so they could have one last night together. But when she opened the door, she was stunned to see Brooke standing there. Macy hopped into Brooke’s car and was driving wildly, with Brooke along for the ride. She hit a tanker truck trunk, which exploded. Brooke escaped the wreck, but Macy didn’t. Her mother Sally and the Forrester family thought she had passed away, but she’d been thrown from the car and rescued by Adam, a crook who took Macy on the run with him.

In early 2019, Liam and Hope thought their newborn daughter had passed away. Doctor Reese Buckingham placed a stillborn baby in Hope’s arms and the two mourned the loss of their baby girl. But unbeknownst to the couple, the doctor had stolen their child and sold her to Taylor Hayes to pay off his gambling debts. For months, Liam and Hope had no idea that Beth was alive and well and living with Steffy, who had adopted her and named her Phoebe. But in August 2019, after Thomas’ son Douglas heard him say Phoebe was Beth, he snitched on his father and Liam and Hope were happily reunited with their daughter.