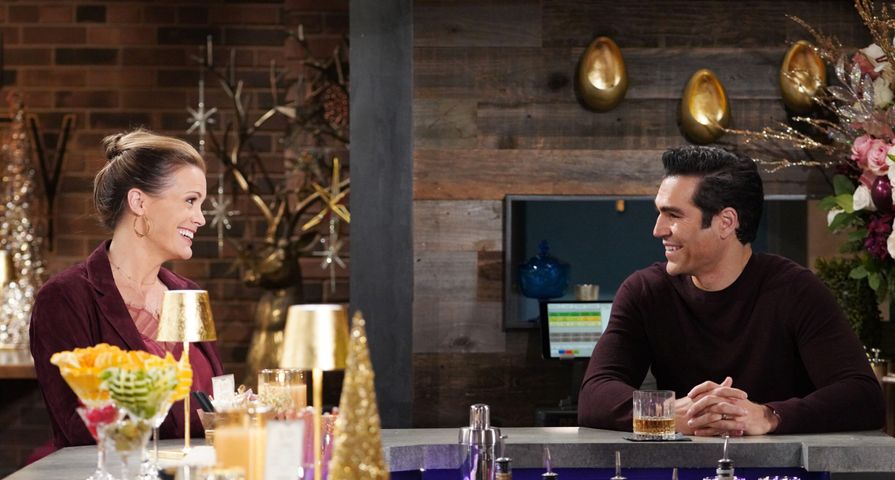 It’s a new year in the land of Genoa City, which means new drama on the horizon for The Young and the Restless (Y&R) fans! Will things get ugly between Chance, Abby and Devon? Could Sharon and Nick reunite? What will happen between Sally, Adam and Chelsea? Fans just love to speculate on storylines! As such, below are some Y&R plotline predictions for 2022.

12. Chance’s PTSD Is About To Explode

Chance recently slipped up when it came to tending to baby Dominic. The poor little one was left crying as Mr. Chancellor’s mind escaped to another time and place. Devon’s about to launch a major custody battle on Chance and Abby, which may further agitate Chance’s mental health. Will Dominic’s health and wellness be at risk if left alone with Chance at the worst time?

11. Abby Cuts All Ties With Devon

Once his custody suit is launched, Abby will cut all ties with Devon. She’ll also make it crystal clear that thanks to his actions, he’s completely cut out of Dominic’s life now. Hamilton will worry that he’s crossed a line and may never be a part of the baby’s life, if he loses this case. That’ll just boost Amanda into legal beast mode. She’ll be ready to play dirty. “Chabby” had better watch out!

10. Dominic Is In Danger

What if a situation arises in which Chance’s mental health leaves Dominic in danger? Could he leave the child alone if he’s preoccupied with something else? What if he’s driving with the baby and leaves him alone in a car for a prolonged period of time? Dominic might end up being okay, but the incident could be placed under the spotlight during his custody hearing.

9. Devon Gets Full Custody Of The Child

Could Devon win this legal suit? What if Chance places Dominic’s well-being at risk? Could Devon get temporary full custody if child services are called? Hamilton may also enlist Mariah as a witness for his case. He may point out that Mariah was somewhat shut out of the baby’s life when she wanted more time, too. He could note that Chance and Abby are being selfish by refusing the two people who helped bring Dominic into this world (Mariah and himself) their due time with the baby. After all, Abby asked Mariah to be her surrogate, while Devon “offered” his sperm.

What’s with Noah’s attitude towards Tessa and Mariah? He’s not overly negative with his half-sister; however, he does seem distraught with the fact that the couple is happy together. Is it that Noah never got over Tessa? He may not have had his heart broken during his time away from Genoa City. Will it be revealed that he wasn’t in a relationship all this time, but rather he’s still pining for his ex? Noah made a comment about his dad not being over his mom all these years, but was he referring to himself?

What if Noah stumbles upon a drunken Tessa one night? She and Mariah might have a fight about their pending adoption (and its frustrating processes) and decide to drown her sorrows at Society. Could he take advantage of the situation? Could these two exes spend a night together, wake up in the morning, and then choose to keep this “affair” a secret?

Rey and Sharon are in a good place, but there seems to be something brewing between Sharon and Nick. Will Rey slip up and cross a line, causing Sharon to leave him? Could Sharon and Nick get caught up in emotion and act upon old habits? Are Sharon and Nick the type of people to have a one-nighter and keep it from Rey? They once did this to Phyllis, way back in the day. But they are older and wiser now. What could happen to bring these two back to their past romance?

5. Sally And Adam Come Together

Sally and Adam are on the verge of hooking up, much to Chelsea’s dismay. How can Lawson continue to want a man who’s done her wrong in the past? Despite pushing her away, Chelsea will remain laser-focused on Adam. He will proceed to give into Sally’s charms over the coming weeks, and Lawson will do everything she can to steal Spectra’s thunder along the way.

In the meantime, Chelsea and Rey will develop a closer friendship as the weeks go by. Rosales feels bad for Lawson, despite the poisoning incident. But could he cross a line with Chelsea? Could Lawson purposely seduce Rey to get Adam jealous? Maybe get Rey drunk (or drug him) and make it seem as if they did something together, all in an effort to get Adam’s attention? The only issue is, she’d be breaking up Sharon’s marriage in the process — but would Chelsea care? She might believe Sharon deserves this karma.

Adam’s been trying to hold everything together as of late. From Billy’s truce to Victoria winning the bid for Chance Comm (and Victor’s approval), it won’t be long before Mr. Newman snaps. This is one of the reasons he’ll throw caution to the wind and dive into a romance with Sally. His father doesn’t approve of Spectra and most of the Newmans hate her because of what she did to Summer. Could the two come together and concoct a plan to deal with Victoria, Victor and Billy (all in one swoop)?

It was a good decision for Billy to wave that white flag to Adam and all the others. Revenge is futile and the best way to get back at anyone is focusing on living your own best life. This will be a top priority in 2022. Will there be wedding bells for Billy and Lily this year? Perhaps the pitter-patter of little feet? Could Lily wind up expecting… unexpectedly? The super couple would likely be over the moon about a baby!

1. The Reunion We’ve All Been Waiting For

Actor Peter Bergman (Jack Abbott) recently revealed he needed emergency eye surgery. This could explain why Jackie hasn’t been around Genoa City much, as of late. This may also explain why a reunion between Jack and Phyllis is seemingly “on hold”. It’s only a matter of time before Bergman heals up and Jack is back (baby)! Then Team “Phack” fans will finally get the romantic reunion they’ve been waiting for!