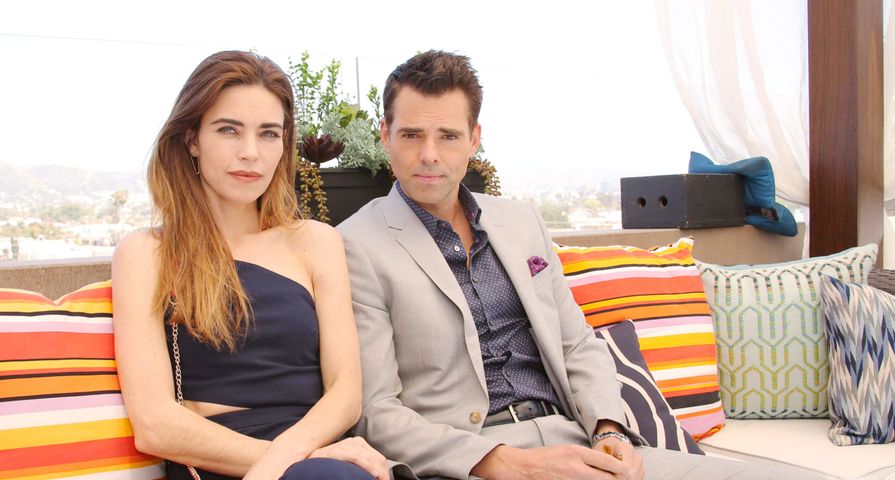 Love makes the world go around in Genoa City, and there is nothing Young and the Restless (Y&R) fans enjoy more than watching their favorite couples romancing it up on the small screen. No doubt, soap opera relationships are complicated with daytime drama super couples constantly breaking up and making up as time goes by. While there are some viewers out in television land that would love to see broken up duos come back together, there are also some twosomes that they don’t want reuniting. Below are 12 Y&R couples that fans don’t want to see get back together.

A reunion could be more than awkward for Victoria and J.T., especially considering their history. Not only was he physically and emotionally abusive at one point (ok, turns out that it wasn’t exactly his fault, but still), the entire situation where Nikki axed J.T. while Vicky, Phyllis, and Sharon tried to cover it up for a year could still leave a bad taste in everyone’s mouth. Not to mention the fact that Hellstrom ended up being very much alive. Better to leave that bridge burnt at this point.

Viewers want to love Amanda and Nate together, but it’s so hard! Yes, he’s sweet and pretty much the perfect man, but there doesn’t seem to be a ton of chemistry between them. Better to just rip the bandage off, and not look back. Dr. Nate might be better suited with Elena, and Amanda has plenty of other suitors she could explore things with in Genoa City.

Theo has desperately tried to change for Lola, but she may need some time alone at this point. The two made cute flirty friends; however, things would not work between them in a bona fide relationship. They’re just too different, and Lola needs someone who has their act together a little more. Theo’s just too flakey.

Adam and Sharon will always have a ton of chemistry between them; however, when their worlds collide, a dumpster fire ignites. Simply put, they are toxic together, and this does make for good daytime drama. It’s like watching a car accident on the side of the road; you don’t want to slow down and look, but you can’t help yourself.

This relationship was a tad awkward while it was happening, and most Y&R fans can agree that these two make better friends than lovers. Besides, Mariah was far more infatuated with Tessa while dating Devon, and Devon couldn’t keep his eyes off Hilary. They should just refrain from any future reunion ideas.

While Stitch currently isn’t in the picture, he was a popular character, and no one truly stays away from Genoa City for long; however, these two just didn’t work as a couple in the least. Lack of chemistry and the fact that Stitch had been with both Abby’s sister Victoria and her mom Ashley doesn’t help either. Add in his son’s mental health issues and their marriage was a complete disaster. Perhaps if Stitch does make a comeback, he should stay far away from Abby Newman.

They made an interesting couple back in the day, but so much has changed between now and then. From marriages to children to Billy diving into a darker side of himself, not many fans want to see these two back together (even if Mac makes a splashing return to Genoa City).

Y&R fans just might be divided on the idea of a Red and Jackie reunion. On the one hand, these two were magical together. On the other hand, Phyllis has had a huge issue with cheating on Jack while the two were together. A clean slate might help, but only if Phyllis changed her ways to make this work.

How many times will Victoria and Billy break up and make up? It’s undeniable, the two have tremendous chemistry together, but they are also quite toxic when together. Besides, Victoria is too preoccupied with her career and caring what daddy Victor thinks to ever make things truly work with Billy again. They should stick to maintaining a positive co-parenting relationship for now.

Nikki’s storylines over the past two decades have gone as follows: being in love with Victor, breaking up with Victor because he’s pissed her off, leaving Victor, heading straight back to Jack, then leaving Jack for Victor. Lather, rinse, repeat. Y&R fans love Jack Abbott. He may not be perfect, but he does try to be a good human being (for the most part). He deserves better from a woman.

Phyllis and Nick make up and then break up, only to make up again. Just when you think these two are over, a spark will fly, and then they are back at it again. It’s almost tiresome, and both need to find a new relationship with an entirely new person (versus going back to an ex). Is it comfort, or ultimate attraction that they can’t shake? Hard to say.

Fans of Shick may just want to shut their eyes before reading this one. Sure, there is a group of Y&R fans out there that adore Nick and Sharon together. The two were high school sweethearts that ended up getting married and building a family together. Which makes it no surprise that many would love to see them add another chapter in their love story. The sad reality is that Shick has a cycle: make up and break up, become friends, turn into lovers, make up, and break up (just like what he has with Phyllis). Therefore, it’s only natural for there to be a group of Shick haters out there who don’t want to see these two reunite. After all, it’ll only set them up for a disastrous breakup in the end.