Home » Trending News » We Weigh In: Why Has B&B’s Sheila Carter Returned?

We Weigh In: Why Has B&B’s Sheila Carter Returned? 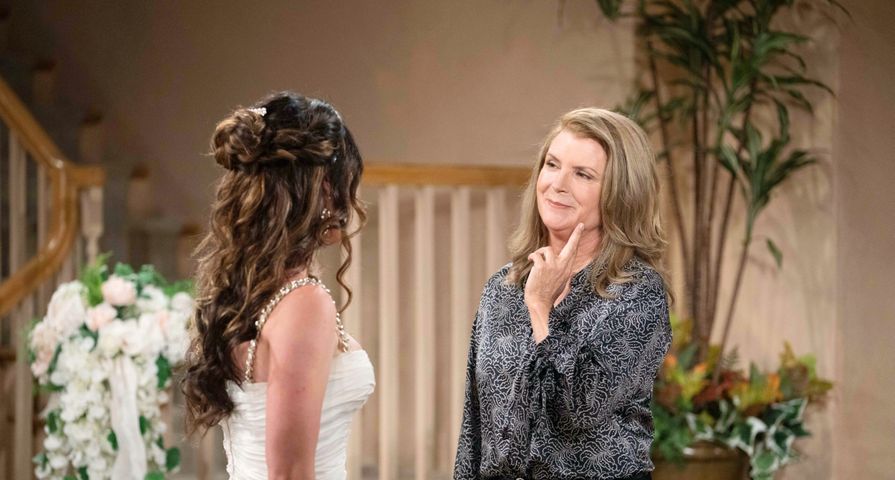 Sheila Carter (Kimberlin Brown) is among the most notorious villains in soaps history, and that reputation wasn’t earned over a few contained storylines. Rather, it has culminated over decades of deception and violence spread across both The Bold and the Beautiful (B&B) and The Young and the Restless (Y&R). Her rap-sheet reads like a psychotic’s to-do list, filled with murders (both attempted and otherwise), plastic surgeries, faked deaths, and betrayals.

Part of what makes Sheila Carter a great villain — and Kimberlin Brown the only actress who can convincingly play her — is that she has emotional depth. She isn’t just evil as a means of moving a story towards conflict; she’s pathologically damaged to crave social acceptance by force. Beneath her supernatural wickedness, she’s deeply human, which is why viewers can’t get enough of her.

With her surprise return, it appears that Sheila has her hall pass into the Forrester mansion — namely, her biological relationship to Finn (Tanner Novlan). But is that all she wants? Sheila has a long memory, so if we’re hoping to find out what she’s planning, we’re going to have to look at her biggest rivalries and bitter failures.

During Sheila’s last visit to the B&B canvas in 2017-18, she fixed her sights on Quinn Fuller (Rena Sofer). Convinced that Quinn was not worthy of Eric’s (John McCook) affections, Sheila wormed her way into Eric’s life by ostracizing everyone else. She spilled the beans about Ridge (Thorsten Kaye) and Quinn’s affair and provoked attacks from Steffy (Jacqueline MacInnes Wood) and Quinn, which helped her look like a well-meaning victim to Eric.

Who could forget that epic brawl, in which Sheila thought she’d asphyxiated Quinn? As she turned away, Quinn leapt up and surprised her with a blow to the back of the head. It seems unlikely that Sheila has forgotten about that encounter.

Want B&B spoilers? Check out Bold And The Beautiful Spoilers For The Next Two Weeks (August 9-20, 2021)

Only when she arranged for Eric’s estate manager, Mateo (Francisco San Martin), to seduce Quinn, did Queric catch Sheila in her old ways. After the plan with Mateo backfired, Quinn rubbed her marriage in Sheila’s face, saying she would be Mrs. Forrester “forever”.

Fast forward to the present and Quinn has been unceremoniously kicked out of the Forrester mansion, much like Sheila was. Could Sheila’s reemergence have as much to do with Eric’s vulnerable state as Finn’s wedding day? After all, she’d never reached out to her son before now. What better revenge could she exact on Quinn than getting her portrait above Eric’s mantle again?

Moving In On Eric Forrester

In the episode for Tuesday, August 10th, there was no mistaking the pleasure Sheila took in seeing Stephanie’s portrait above the Forrester mantle. While its prominent place reinforced that Quinn was no longer in the picture, it also symbolized that Eric was unattached. Or maybe Sheila was just relishing in the memory of shooting the matriarch.

“Do you really think you can trust her?” Sheila had asked Eric during their last encounter. “Always looking over your shoulder… That’s not the life I want for you. You deserve so much better than that.”

She was talking about Quinn’s infidelities. Given the way things turned out, with Quinn and Carter Walton’s (Lawrence Saint-Victor) affair creating a public embarrassment for Eric, it appears Sheila had a point. Her stance at the time could be used as ammunition to get close with Eric again.

Besides, Eric has already shown a weakness for love interests with questionable pasts. If he was willing to disagree with Ridge and Brooke (Katherine Kelly Lang) about Quinn’s psychotic tendencies, he might decide that Sheila can be reformed… again.

Don’t laugh off this possibility! Of all of Sheila’s failures, killing Lauren (Tracey E. Bregman) has got to land the top spot. She has tried numerous times (at least seven attempts, by my count) and always fallen just short of the mark. So it stands to reason that her return to L.A. could be an attempt to fulfill something that is, at this point, a bucket list item: ending Lauren Fenmore.

Perhaps Sheila knows that gaining Eric’s trust is out of the question, but gaining his pity could score the villain a job. Eric might feel obliged to help Finn’s mother get settled and offer her a deal — under the strict conditions that she stays away from Steffy and the children.

However, if Sheila’s position has any business ties to Forrester Creations, by extension it’ll also have ties to Fenmore’s company, JVC. Lauren’s storyline over in Genoa City has been pretty dull lately. B&B and Y&R viewers know that another round between these life-long rivals would be a ratings victory for both CBS programs.

She Craves A Real Family

Next to her dream of destroying Lauren, surely being a Forrester would come second on her wish list. For all of this villainous speculation, it’s possible that Sheila truly wants nothing more than to be a mother to Finn, a grandmother to Hayes, and repair her damaged relationships with Eric, Brooke, Ridge, Steffy and… well, everyone. Let’s even throw Mateo in there, wherever he is! Sheila’s history has held many traumatic moments, and her own upbringing was terrible. (She confessed to having murdered her father by poisoning him.)

It’s only a matter of time before Sheila’s dark side makes an appearance — the highlight reel of Sheila’s past violence, featured in the August 10th episode, seems to be preparing viewers for as much — but is it possible that she’s merely looking for somewhere to belong?

Taking Hayes From The Forrester Family

To put this last scenario in perspective, let’s reflect on the scene that was happening just prior to Sheila’s arrival. The Forrester and Finnegan families were happily mingling, and a theme of forgive-and-forget permeated the interactions between Steffy and her maid of honor, Hope (Annika Noelle), as well as Liam (Scott Clifton) and Thomas (Matthew Atkinson). Eric and Ridge were also as close as ever. After Ridge gave that passionate speech for Steffy, Eric proudly said, “That’s my boy”. It seems like everyone deserves forgiveness, except Sheila.

Want B&B plotline predictions? Check out Bold And The Beautiful Plotline Predictions For The Next Two Weeks (August 9 – 20, 2021)

After so many years of animosity and bad blood, it’s possible that Sheila has taken stock of how her obsession with becoming a Forrester has cost her. And now that her son’s wedding to Steffy has at long last cemented her station in the family tree, could Sheila discover that all the pain and personal losses weren’t worth the effort? If Brooke, Steffy and Ridge continue to debase her, will Sheila want to prevent Finn and Hayes from growing to despise her as well? There would be no better way to upend the Forrester family legacy and hurt Steffy than by taking Hayes.