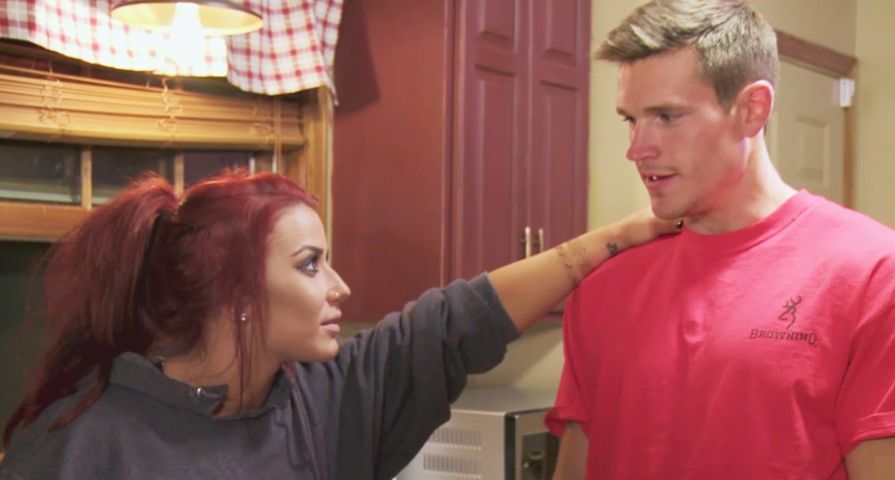 This season of Teen Mom 2 has already been interesting for longtime fans of Kailyn Lowry, Chelsea Houska, Jenelle Evans and Leah Messer. As Jenelle and Chelsea each welcomed their babies last week, the episodes that are currently airing are showing fans when the women found out they were pregnant, and while fans are well aware Kailyn and Javi are over, they are now just seeing how everything happened between the two once Javi returned from deployment. The Monday, January 30th episode of Teen Mom 2 saw the very stark contrasts of all the young moms’ lives.

After some adamant denials last week, Jenelle Evans finally admitted that she was pregnant, but was not happy about it. Jenelle was forced to confirm the pregnancy after the police report from a car accident she was involved in leaked and did not want to deal with all of the “haters” about her third child. In fact, Jenelle was so mad, she wouldn’t even tell her mom that she was pregnant even though Barb already knew, and even pulled her co-star Chelsea Houska’s recent pregnancy into it. “Everyone was happy for Chelsea, then everyone’s like, ‘Why is Jenelle embarrassed to come out with it? Chelsea did it right the first time.’ Well, I mean we all are on a show called Teen Mom, so no, we didn’t do it right the first time.”

Speaking of Chelsea, the episode saw her stressing over planning and having a wedding while pregnant with her second child, so she and Cole decided to just have a small civil ceremony and then have a big reception after their baby was born. Meanwhile, producers continued to battle with Chelsea’s ex and Aubree’s father Adam Lind who insists that the reason he looks bad on the show is because of the way they edit him, but the producers quickly reminded him that he was the one locking them out and driving away when he said he would be available to film.

Meanwhile, Leah Messer was busy dealing with the aftermath of a disastrous flooding which had caused serious problems in Messer’s area of West Virginia, including damage to her daughters’ school. Although she wanted to talk to her ex Corey about starting them at school in her district she decided to leave it at the twins going to the school near Corey which had been set up for displaced children because of the damage to schools.

Last but not least, there was more of Kailyn and Javi’s fighting. Last week was not Kailyn’s best look with the way she treated Javi after he returned from deployment, and it didn’t get much better this week. At first Kailyn refused to film because she had gotten into a big fight with Javi and then sent her son Isaac with his dad Jo, but Isaac just cried over how much he missed Javi, practically breaking everyone’s hearts. When producers caught up with Javi at his hotel, he revealed that the fight started after he went by Kailyn’s house to pick up some of his things but found her with another man. He also revealed that he had caught Kailyn in a lie and then commented on how she could even already be with another guy, especially when her kids were having such a difficult time with the divorce.