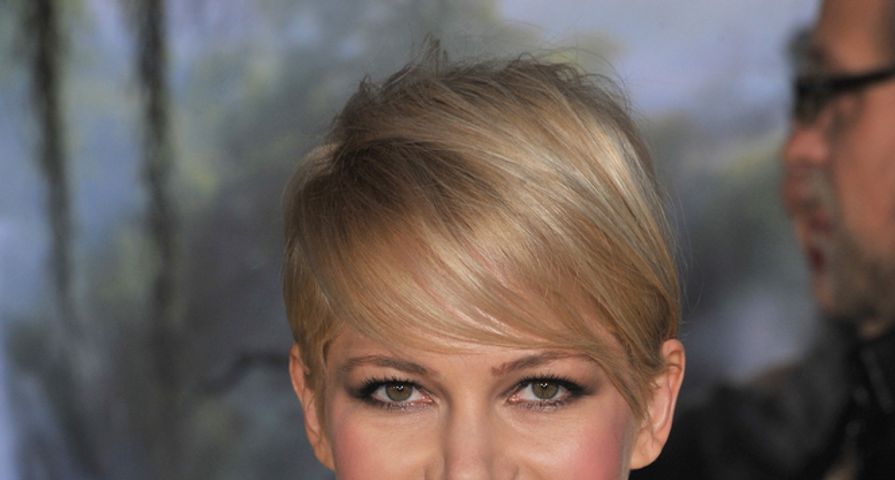 Michelle Williams has come a long way since she first achieved recognition for her role as Jen Lindley on “Dawson’s Creek.” Even though Katie Holmes initially took much of the attention, Williams has managed to surpass all of her co-stars and become one of the most critically acclaimed actresses of her generation. She’s also garnered a lot of positive attention thanks to her love of short hair. No other actress has been as committed to the pixie haircut as Williams. Since there aren’t many actresses out there who change their hairstyle as frequently as she does, let’s take a look at Michelle Williams’ hair evolution!

Before she cut her hair into an adorable pixie, Michelle Williams kept her hair long and wavy. For the 78th Academy Awards – where she was nominated for the Best Supporting Actress Oscar – she didn’t take too many risks with her hair. She had it styled in messy side bun with her bangs swept to the side. Although she didn’t take any awards home that night, Williams still looked like a winner thanks to her Vera Wang dress and her classy hairstyle.

The “Brokeback Mountain” star traded in her long, wavy locks for a short and playful pixie cut. She debuted her new hairstyle at the 2007 Film Independent Spirit Awards, which she attended with her beau at the time, Heath Ledger. The hairstyle suits Williams perfectly thanks to her fine features and big green eyes. She looks like a young Mia Farrow around the time that she starred in Roman Polanski’s film, “Rosemary’s Baby.”

Michelle Williams showed up at the photocall for her film “Synecdoche, New York” with a shag hairstyle that, if it were any longer, would be more of a bob. We really think that the former “Dawson’s Creek” star is beautiful, but this hairstyle looks incredibly awkward on her. We much prefer the sleek, playful pixie that she was sporting when she was with Heath Ledger. Williams pretty much disappeared after his death, but she was finally starting to make public appearances again.

The “Blue Valentine” star finally grew her hair out! At the 2009 Film Independent Spirit Awards, she wore her hair with a deep side part and a side swept fringe and kept the back wrapped in a soft twist. While it is nice to see her with long hair again, we can’t help but miss her cute pixie cut. If you have fine features like Williams, short hair is always a better choice than long. Her face gets lost behind all of that hair.

Michelle Williams decided to go short again in 2010. She attended the photocall for “Blue Valentine” with a short, platinum blonde crop with a sweeping fringe. Rumors were rampant that she was dating her co-star Ryan Gosling. It turns out the two actors were just really good at their job! Although they looked pretty cozy at the Cannes Film Festival, these two were just really good friends, which was such a disappointment for their fans.

Much to our delight, the “My Week with Marilyn” star finally went back to a short, playful pixie cut in 2011. She showed up the 15th Annual Hollywood Film Awards Gala with a tousled pixie. Although we prefer it slightly shorter than this, we still think this is a winning look on her; however, it seems like some people are not huge fans of this hairstyle. According to Williams, her daughter Matilda would prefer if she were to grow out her cropped hair.

Screening for My Week with Marilyn – 2011

Michelle Williams arrived at the screening for “My Week with Marilyn” with her pixie hairstyle freshly trimmed. According to the Oscar-nominated actress, she decided to go back to a short hairstyle for her deceased lover, Heath Ledger. “I cut it for the one straight man who has ever liked short hair and I wear it in memorial of somebody who really loved it. I’ve really grown into it. I feel like myself with short hair,” Williams told Elle.

The Oscar-nominated actress kept rocking the pixie hairstyle in 2012, but this time she added some red hair dye to the mix. Not one to fit in, Williams went for a simple but classy look at the 69th Golden Globe Awards, where she won Best Performance by an Actress in a Motion Picture (Comedy or Musical) for her role in “My Week with Marilyn.” She wore a Jason Wu dress and accessorized with a vintage Fred Leighton jeweled satin headband.

Michelle Williams kept her pixie, but bleached it blonde for the Film Independent Spirit Awards. She won best female lead for her performance as Marilyn Monroe in “My Week with Marilyn.” When Williams accepted the award, she joked that when she attended the event nearly a decade earlier, she wore her own clothes and cut her own hair for the event. A lot can change in ten years! Now she is a budding fashionista with one of the most iconic hairstyles in the business.

World Premiere of Oz: The Great and Powerful – 2013

The Golden Globe-winning actress sported very different hairstyle at the world premiere for “Oz: The Great and Powerful.” Instead of having the short pixie we have come to expect, Williams had an asymmetrical crop. According to her, she kept her hair short for years because growing it out is so difficult. “That’s why I’ve stayed with short hair for so long,” Williams explained. “The mid-stage is insufferable. It’s really hard on your self-esteem.”