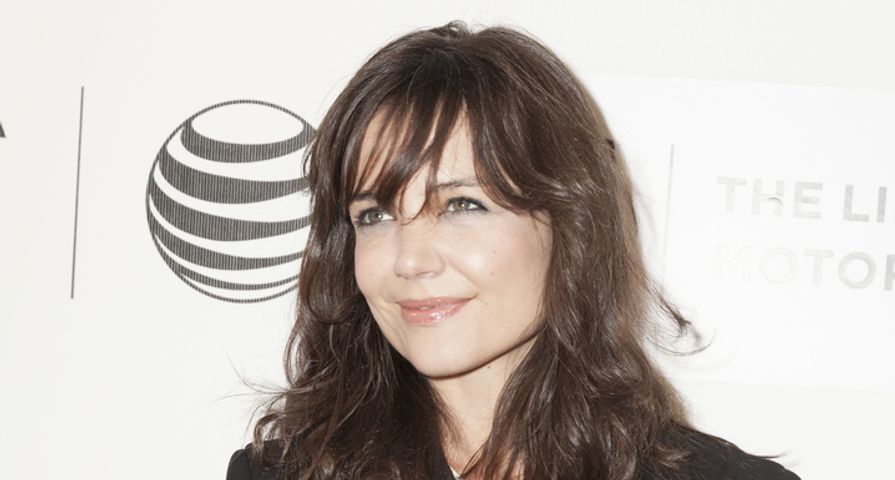 Who knew that Katie Holmes was such a trendsetter – we didn’t!  When it comes to her red carpet fashion, the former “It Girl” seems to have a lot of trouble getting it right; however, when it comes to her hair, she seems to have a better idea of what works and what doesn’t. For a brief period of time, Holmes was pretty adventurous with her hair. She seemed to be all about trying different hairstyles. While some of these cuts worked on her, others weren’t so flattering. Because she has taken more hair risks than your average star, we have composed a timeline of Holmes’ hair evolution! Check it out:

Back in 2002, Katie Holmes didn’t take a lot of risks with her hair. She liked to keep it nice, long and straight and we think it really worked on her. The only difference that we see in this picture is that she had lightened her chocolate brown hair. When she attended “Red Dragon” premiere, her dye job was growing out. Her roots were dark and the rest was lighter, which makes it look like she had the ombre before it was even a trend!

The “Teaching Mrs. Tingle” star didn’t take too many risks at the Glamour’s Women of the Year Awards with her hair. She wore it in loose curls with a sexy side part. Holmes’ career was in transition at this point. She had just finished her sixth and final season of “Dawson’s Creek” and had only been in one film that year – “First Daughter” and it was anything but a success. Critics ravaged it and it totally bombed at the box office.

The Late Show with David Letterman – 2005

Katie Holmes wore her hair in loose waves for “The Late Show with David Letterman.” The young starlet was looking great in 2005; however, her appearance wasn’t what people were talking about. Holmes had broken off her engagement with Chris Klein and had hooked up with mega star Tom Cruise. These two had a whirlwind romance, which culminated with them getting engaged at the Eifel Tower after only a couple months of dating.

The “Pieces of April” star – who was on a hiatus from her acting career – had become more adventurous with her hair by 2007. She ditched her long locks and began sporting this ultra chic chin-length bob sans bangs. Around this same time, her good friend Victoria Beckham had done something similar. She traded in her hair extensions for her famous inverted bob. In 2007, these two seemed uber close; however, like her hairstyle, it didn’t last.

Katie Holmes debuted her face-framing bob with a sweeping side fringe at the premiere for her new movie “Mad Money.” We personally prefer the bob she had without bangs, but this one looks good on her too. Sadly, after a three-year movie and television hiatus, Holmes’ return to the big screen was not as successful as one would have hoped. The film was a complete flop and critics savaged her performance, calling her “the movie’s weakest link.”

At the “Topic Thunder” premiere, “The Gift” star went super short with this daring pixie cut. While we do commend her for being brave enough to try this hairstyle, we don’t think it really works on her. Katie was meant to have a bob. Holmes made her Broadway debut in 2008 in the revival of Arthur Miller’s “All My Sons.” Her performance received mixed reviews – some critics weren’t impressed with her, while others thought she brought a “glint of glamour” to the production.

Cast Of Dawson's Creek: How Much Are They Worth Now?

When she attended the “Variety’s 2nd Annual Power of Women Luncheon,” Katie Holmes had long hair again, but this time she spiced her look up with some bangs. We love her with long hair – it reminds us of when she was first starting her career on “Dawson’s Creek.” Katie went back to the big screen in 2010 with the indie flick “The Romantics.” This time her performance was praised, with the Hollywood Reporter commenting that “the film more or less belongs to Holmes.”

Katie Holmes wore her hair long and sleek to the “Don’t Be Afraid of the Dark” premiere. In 2011, she also starred in an eight part miniseries on the History Channel called “The Kennedys.” Holmes played Jacqueline Kennedy, which isn’t such a stretch given how much she resembles the former first lady. Her performance once again received mixed reviews. Some critics didn’t think she performed the accent correctly while others didn’t think she had the Kennedy class.

The newly single star’s hair looked like it had swallowed half her face at the 12-12-12 Concert at Madison Square Garden. When she has long hair, we prefer it when she keeps it straight. 2012 was a pretty exciting year for the mother of one. Holmes took the world by surprise when she suddenly filed for divorce from her husband of almost five years, Tom Cruise. She also returned to the stage with a starring role in the play “Dead Accounts.”

Katie Holmes wore her hair curly to the grand opening of Tao Downtown. According to her, her hair is naturally wavy and “not in a good way,” which we find hard to believe! The stunning star was named the first-ever celebrity face of Bobbi Brown Cosmetics back in 2013. Holmes – who usually goes for a fresh-faced look – sported a smoldering look in one of the advertisements, which totally works on her!

The “Dawson’s Creek” alum didn’t style her hair at all for the “Boulevard” movie premiere. While she usually turns up at events looking at least partially polished, she looked rather disheveled here. On the plus side, Holmes seems to love life in New York City. “New York has been very good to both of us. I love the theater, the galleries in my neighborhood. Stuff [like] that is so much of what makes me love this city. I love the Knicks. I love talking to my neighbors in the elevator. I like feeling a part of something big,” Holmes said.