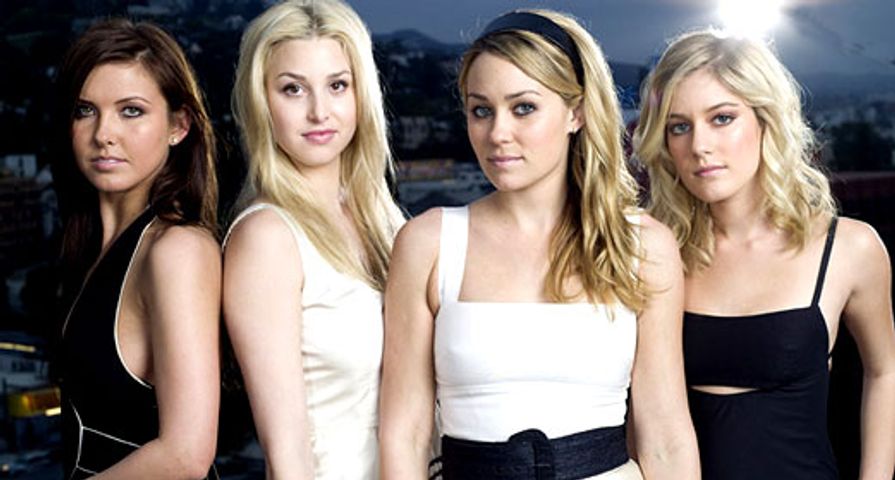 It has been 10 years since MTV’s hit series The Hills first premiered and, in honor of the milestone anniversary, a lot of the cast came together to spill secrets like never before. Fans of the reality series and the cast are well aware that in the years since it first aired, and especially since it ended in 2010, may of the stars have spoken about how “fake” and “manipulated” the series really is. Luckily, Lauren Conrad, Audrina Patridge, Spencer Pratt, Heidi Montag Pratt and more gave in depth interviews for the 10 year anniversary, letting the rest of the world in on even more secrets, and never known behind-the-scenes facts. Check out the 10 biggest secrets and revelations from the reunion interviews:

It has become quite common now for reality stars, especially MTV reality stars, to complain about how edited and fake the shows they star in are, yet still don’t quit. We all know they don’t want to give up the paycheck, and for once someone owned up to it. In the interview with InStyle for the anniversary, Lauren Conrad admitted, “I initally signed on because I wanted the paycheck. I was going to college, my parents weren’t financially supporting me anymore, and I had used up all my Laguna [Beach] money. So when Adam [the producer] came to me and said, ‘Do you want to do this show?’ I was like, ‘Yep!'” Unsurprisingly, Heidi Montag and Spencer Pratt also admitted to being lured in for the money and not caring about how the show made them look. “During season 1, all of my stuff was from thrift stores or hand-me-downs. When I started getting a little more money, I got into the heels and Birkins. I had a million-dollar closet,” Heidi stated. Spencer added, “I just had a show [Princes of Malibu] canceled, so I wanted the ratings. I was always chasing that payday. I loved going to Hermès and buying everything. I was eating dinner with Wolfgang Puck, having him cut my steak for me every night.” Now, everyone is well aware the pair have fallen on hard times after continuing their extravagant lifestyle with no show to back them up.

Justin Bobby, aka Justin Brescia, became quite a star after joining the cast and becoming Audrina Patridge’s main love interest, but it wasn’t until recently fans got the story behind Justin joining the show! Patridge first met him because he was making his way as a hairstylist to different music stars and began doing her hair as well. “I asked him if he wanted to cut my hair on camera,” Patridge revealed of the first time Justin ended up on film, while he added, “I think I charged her!”

The fight between Heidi and Lauren came down to one confrontation where Lauren stated, “I want to forgive you, and I want to forget you.” While Lauren meant what she said, Heidi refers to it as something “rehearsed.” “Lauren would watch movies sometimes and get impacted by them. I think that line was rehearsed in her mind.” She added, “It was really intense for me, because it was the first time I had seen Lauren since I had surgery for the first time. When I woke up, this whole thing had exploded. I was like, ‘Did I wake up in hell?’ I had no idea any of this was going to happen.” Meanwhile Conrad says it was one of the realest moments on the show. “There’s nothing fake about that scene. That was a very real moment. And while it took a lot of conversations for me to be open to having that conversation on-camera, I think it’s important we did.”

Spencer Pratt and Heidi Montag Pratt have really defied the expectations of everyone by staying married for seven years now, and the two recalled falling in love at first sight. “The first time I saw Spencer, I instantly fell in love with him,” Heidi stated. “I had goo-goo eyes. He was surrounded by, like, 20 [Playboy] Playmates. But I danced with him anyway, and we hit it off. I think people knew the depth of love we had right away, and I think it scared them a little.” Pratt on the other hand says he was most impressed with Heidi’s “scary good” dance moves.

While a lot of things may have been manipulated or exaggerated for the sake of drama, fans are well aware the falling out between Heidi and Lauren was very real. Lauren’s final scenes were shot at Heidi and Spencer’s wedding, which of course was extremely awkward, and Lauren finally opened up about why she was so desperate to leave and what actually happened at the wedding. As it turns out she only had a short time to shoot the episode before having to be at an event, but things became complicated and even more stressful when the power at the church went out, delaying the wedding and therefore delaying Conrad. “The power went out, the generator went out and I said, ‘I need to leave!’ And [producers] wouldn’t let me leave! They literally locked me in the basement with two security guards and wouldn’t let me leave! I was like, ‘You can’t keep me here!’ I was throwing a fit!'” A producer reassured that she may have “felt locked in” but definitely was not. Regardless, it took two hours before they could film and Conrad had to make a quick escape to make her event.

As it turns out, after the series came to an end, the cast weren’t quite sure what to do, and eventually several of them just left L.A. completely. “When the show stopped, it was shocking,” Heidi stated. “We didn’t really know what to do. We went to Malibu first and had all these marines and bodyguards living with us. Then we went to Costa Rica and lived there for a couple of months. It was hard because we didn’t really have our families and life was just a mess. It was really challenging adjusting from that high.” Meanwhile Justin Bobby said, “The last thing I wanted to do was be around L.A., so I went to Nicaragua for a couple of years on a surf trip.” Then of course is Heidi and Spencer who revealed what life is like for them now, and Spencer admitting he doesn’t have any friends. “My life is like Groundhog Day. Every morning, I make two 32 gram shots of Zip Zinger espresso. I used to have a breakfast burrito every day, but now I have an apple with almond butter, because I want to be model skinny. Then I usually do jujitsu for about an hour and a half, then I eat salmon. Then I go home, ice my old man knees, watch Apple TV, and tweet, because I don’t have any actual friends to talk to. Then Heidi and I will either get sushi or Mexican food and I’ll have some tequila on ice. I keep that in rotation.” Heidi added, “I’m a domestic goddess. I cook and I clean and I deal with four dogs. Spencer and I are going to try to have a baby next year, too. I’m ready to be a mom – I think it’s going to be such a great chapter. Kristin seems like such an awesome mom, and I think Audrina will be such a great mom. I guess we need to have the new Hills as moms!”

Despite being “reality TV” it is quite obvious everyone was given a role, and Spencer Pratt’s was the villain, and he certainly embraced it. Looking back now, Pratt opened up about how much it actually affected his real life. “We wanted to have a show that people watched, so we did all this stuff that made us look like the worst humans on Earth,” he says. “When the cameras were off, I was a complete gentleman – opening doors and going to the movies and cuddling. There was a Dr. Jekyll and Mr. Hyde thing going on. If I did any of that [as an actor] in an indie film, people would think I’m the new Jennifer Lawrence.” His sister, Stephanie, added that her brother “is the funniest human on the planet,” but she says that it was no fun to film with him: “when he was mad at me – and during the last season when we stopped speaking. I never think about those times. It was very dark.”

Although producers heavily manipulated situations to get the most drama and best entertainment value out of everything, there were certain things that made the cast put their foot down. For Lauren, it was a set-up love interest which she actually had zero interest in. In season three, they took a trip to Paris and along with long and “exhausting” shooting hours, producers had a selected a “rocker guy” for Lauren to date there. “At that point, they had picked out this boy – they had this idea that I needed to fall in love in Paris. So they had picked out this boy who was very nice, but I just wasn’t interested.” Producers, however, were persistent in having the two date, and then told Conrad she had to kiss him, which she was not okay with. “In Paris, they wanted me to kiss that boy good night. And I got into a huge fight with my producer in the lobby! He was like, ‘You didn’t even give him a kiss good night.’ And I was like, ‘I don’t like that boy — why would I kiss him good night?!'” “And [the producer] was like, ‘It would be the perfect ending!'” she continues. “And I’m like, ‘No.”

Fans are well aware that Spencer and Heidi became increasingly more strange as the show went on, but it all came to a head when Heidi underwent an astonishing 10 plastic surgeries in only one day, and was in so much pain that her hubby turned to crystal healing to help her and became addicted to their “powers.” “I was playing nurse, and her painkillers weren’t working. I started Googling ‘homeopathic remedies,’ and I read this article about Sugilite – this one rock with healing powers. So I go buy a $15,000 chunk of Sugilite, and when she held it, she said she felt no pain. Then I was like, ‘I’m filling the whole bedroom with crystals! I’m putting them on!’ I didn’t want Heidi to be in pain anymore,” Pratt explained. He went on, “I started getting into wands, too. I was just like, ‘I need to join the Illuminati, it’s my only chance.’ There was a lot of dark energy, and I was looking for any way to counteract it. You just start getting medieval on s—.”