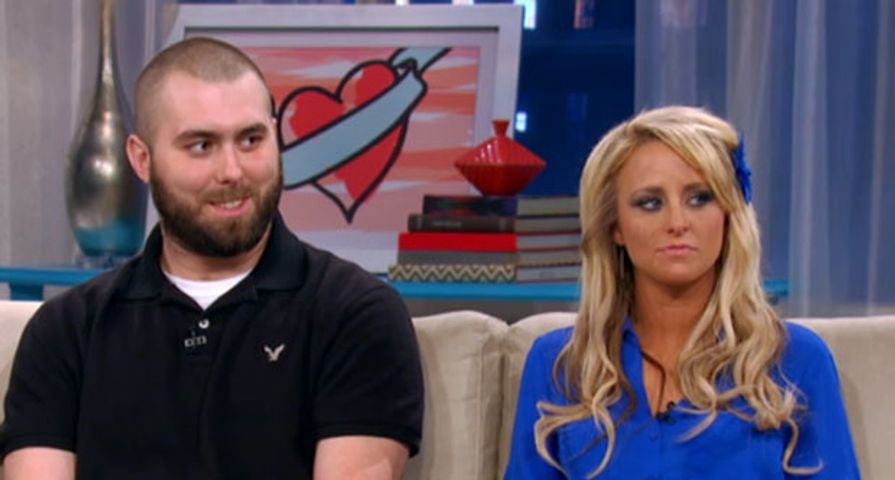 MTV’s Teen Mom 2 stars Leah Messer and Corey Simms have had almost every detail of their lives documented since first appearing on 16 and Pregnant in the show’s second season in 2010. The pair became pregnant with twins after only a month of dating and decided to marry only a year after knowing each other. Unfortunately the marriage didn’t work out and, ever since, the two have been constantly discussing the custody situation of their daughters Aliannah and Aleeah, often times resulting in massive fights and taking each other to court. Both have gone on to re-marry and start other families, but are constantly trying to co-parent their twins and do what is best for their children, a task not always easy when things get personal. As Leah’s life has fallen into a downward spiral recently, the custody battle is raging on like never before. Check out 10 things you need to know about Leah Messer and Corey Simms’ custody battle.

10. This Isn’t Her Only Battle

Unfortunately for Leah, this is probably not the only custody battle she is going to have to fight. The most recent season of Teen Mom 2 saw the divorce of Leah and her husband Jeremy Calvert with whom she shares their 2-year-old daughter, Adalynn. Insiders are now stating that although Leah currently has primary custody of “Addie”, Calvert is gearing up for a custody battle because of a recent scary incident involving the toddler. “Everyone is very worried about Addie. She recently wandered out of the house while Leah was distracted. Thankfully, a police officer found Addie and brought her home,” a source told In Touch.

9. She Has Always Had Primary Custody

Prior to recent events, Messer always had primary custody of her twins with Corey following their split in 2011. The two agreed upon an arrangement where Leah would have them both all week and Corey would have them every weekend, however over the seasons of Teen Mom 2, fans have seen Corey try to get that changed multiple times in order to give his girls a more stable home.

Since Leah was the primary caregiver of Aleeah and Aliannah, Corey was handing over a considerable amount of child support to her. Corey and Leah have argued time and time again over payments, with Leah always saying she needs more while Corey says he should pay less because he buys the girls things whenever they need them such as school supplies, toys and clothes. Even though he does that he still gives Leah the same amount of child support, which is supposed to go towards all those things. While opinions differed over how much Corey should pay, it was only recently discovered that Leah has a spending problem which made many worried his child support payments weren’t always going towards his daughters.

7. Corey Was Worried About Their Safety

Unfortunately, depression and mental health issues really took their toll on Leah lately which in turn have affected the girls prompting Corey to bring up more than once his concern for them. While pushing for a change in custody and more time with his daughters Corey mentioned that he is afraid the children will accidentally come to harm under Leah’s care, which is just another reason he should have them more.

There was a huge issue with Leah potentially having a drug problem in the most recent Teen Mom 2 season, and she ended up going to a treatment facility, but not for drugs. Messer revealed she was battling mental health issues including depression, anxiety and extreme stress causing her to make the decision to leave her twins with Corey, and Addie with her mom and attend the facility. Unfortunately, her first attempt at going was inadvertently stopped by Corey. Leah was at her hotel near the center she was suppsoed to check into the next day when she received a distressing call from her mother causing her to abandon her plans for treatment for the time being. “I don’t think he’s going to give you your girls when you come home!” Leah’s mother cried to her over the phone.

5. Leah Had Problems Keeping a Schedule

One of Corey’s other complaints with Leah’s parenting was her inability to keep a proper schedule for the two five-year-olds, which many parents know is essential for young children. On a particular Teen Mom 2 episode, viewers watched as Leah cooked her daughters dinner and fed them at midnight on a school night. Naturally fans were shocked and worried, as was Corey, who also has a huge problem with the fact the kids are constantly late for or absent from school because Leah has a sleeping problem.  On the reunion episode Corey stated, “Like when your kids come to tell you that their mommy’s asleep so hard core that they cannot wake her up and they have to make themselves breakfast.” Leah defended herself, “And what did I tell you about that? The doctors were testing me for narcolepsy, a sleep test study and no support from you or your wife.”

Source: In Touch Weekly
Everything To Expect From Teen Mom OG Season 7B

One of the biggest reasons why Corey consistently pushed for primary custody of the twins was because despite Leah’s denials, he was convinced she had a drug problem. Earlier, fans saw Leah react badly to anti-anxiety medication causing her to go off the pills, but things became strange with her again this season and there were many instances when it was clear she was very out of it as she was slurring her words, unable to keep her eyes open and even fell asleep while sitting upright and holding her brother’s baby. “It’s hard for me to get the truth out of Leah about a lot of stuff,” Corey said at the reunion. “People that would randomly come up to me in public, around our small town, telling me how bad they’ve seen you on drugs. It’s hard to let that slide.” In earlier episodes in the season he also confronted Leah where he told her that the same people told him Leah “would take anything she could get her hands on” to get high.

After everything, on October 7, 2015, Corey finally won primary custody of Aliannah and Aleeah. A West Virginia judge ruled that Simms and his expectant wife Miranda would have the girls Monday through Friday and Leah would get them weekends, essentially flipping the custody agreement the parents originally had.

2. Leah Claims He Only Wants Money

Even though it seems Corey has legitimate reasons to be concerned his kids are not in the most stable of households when with their mother, after losing custody, Leah slammed Corey, saying he had only one motivator for wanting primary custody. “I think child support has a lot to do with it,” she stated, suggesting he just didn’t want to pay her the money. “When him and Miranda first met, that’s when he started the full-custody thing. It hasn’t stopped since then.”

Although being primarily with Corey may be best for the girls right now, Leah is very upset by the judge’s decision and has filed a motion for the judge to reconsider and would like for it to be changed to 50/50. “It was like a slap in the face” she told Us Weekly of learning her ex had been awarded primary custody. She also added that his main defence was her not getting the girls to school on time and she is already getting that cleared up. “I talked to the superintendent and I’m sending them the [time-stamped] pictures I took to prove the girls were not tardy. They’re going to take them off,” she stated although the school could not be reached to confirm.

Exclusive: #TeenMom2’s #LeahMesser opens up about her custody battle with ex-husband Corey Simms. Pick up the new issue of Us Weekly for the full story.