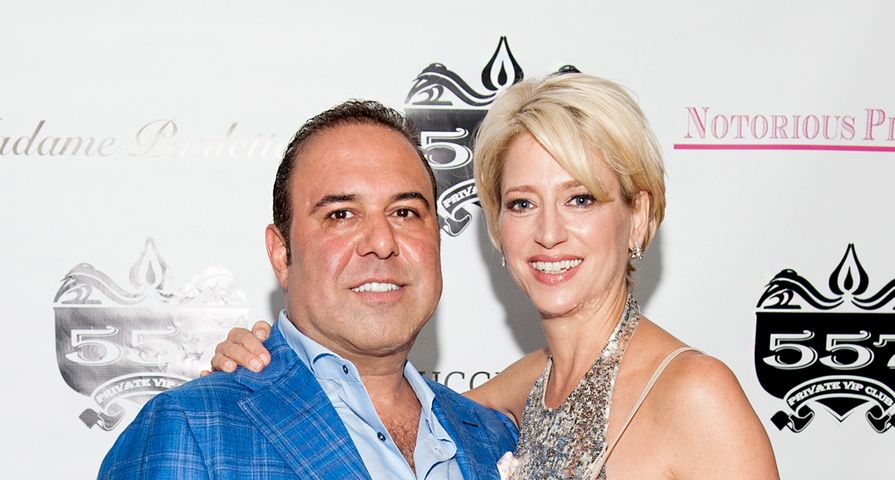 Bravo’s Real Housewives of New York City is one of the longest standing shows in the Real Housewives franchise. It first premiered back in 2008 and has ten seasons under its belt! Over the past decade Housewives have come and gone, including their husbands, and we’ve even watched some of the veteran cast members go from happily married to divorced. Here’s a look back at all of the couples we’ve ever seen on the show ranked from worst to best!

The Skinnygirl mogul met Jason Hoppy back in 2008 at a club in New York City. Their relationship moved fast as she quickly got pregnant and they were then offered their own spin-off series around their wedding in 2010. The first spin-off led to another which followed them in their new joint life raising their daughter, Bryn, in the city and navigating their ever-changing careers. Sadly, their relationship didn’t last long and when it fell apart it got really nasty. Their divorce dragged on for nearly 4 years and cost Frankel millions of dollars! The two have also been embroiled in an ugly custody battle. Frankel has since stated she regrets the entire relationship which is why their relationship lands as the absolute worst!

Jules Wainstein joined the cast of The Real Housewives of New York in season 8, and while he relationship seemed normal for the first little bit, it quickly became clear these two had major problems. Part of her storyline focused on how her husband of 8 years was never around. After the season wrapped up it was revealed that he was allegedly having an affair and the two were getting divorced. Things got pretty ugly in divorce court as both Jules and Michael were fighting for primary custody of their two children and Jules was fighting for spousal support. The two began slinging mud at each other in the press as she accused him of infidelity and Michael accused her of having a drug problem!

For a long time Ramona and Mario Singer were considered one of the power couples on the show as they had been married for over two decades and from the outside seemed pretty solid, but apparently, these two hid their marital woes well. These two land near the worst end of this list because Mario had an affair behind Ramona’s back which is what led to their divorce. She tried to forgive him and save their marriage, but he was unable to stay away from his mistress so she eventually broke it off for good. Unlike other Housewives in the past, the divorce between Ramona and Mario didn’t play out in the media. It was pretty clean cut since it was clear Mario had cheated and Ramona could financially support herself. Their divorce was finalized in August 2014.

LuAnn’s new relationship with Tom D’Agostino caught a lot of flack during season 8 when the two first met and then got engaged after only 3 weeks of dating. Not only did Tom have a history with both fellow Housewives Ramona Singer and Sonja Morgan, but then was caught making out with another woman while engaged to LuAnn! This is definitely reason enough to rank them as one of the worst couples on the show. Of course, the former Countess chose to stick by her man and the two were married and then divorced less than a year after they tied the knot.

The former model joined RHONY in season 6 and only lasted for two seasons. In her first season on the show, a lot of her storyline revolved around her marital problems with Josh, but the two fought through it and seemingly came back stronger than ever in season 7. Unfortunately, after season 7 wrapped up Josh Taekman’s name surfaced in the Ashley Madison leak. After denying his involvement, he issued an apology to his wife and family and even though Taekman maintains he was only signed up as a joke, he looks pretty guilty. His account showed he had accessed the site numerous times. Regardless of what happened, the two have been married for 12 years and are still going strong!

Even though Dorinda Medley has spent enough time defending her relationship with John Mahdessian and the two have now been dating for over 4 years, we’re still scratching our heads as to why these two are together! While there have definitely been worse couples on the show who’ve cheated, lied and divorced, these two seem to have been around the block and know what they want from each other. Many of the other RHONY cast mates have expressed their dislike for Mahdessian and he’s definitely shown a few bad sides on the show, but whatever these two are doing is working cause they are still going strong and seem to really care about one another!

Alex McCord was one of the original Housewives of New York City. She and her husband Simon Van Kempen appeared on the first four seasons of the show before she was fired in a cast shakeup. While the two of them didn’t necessarily get along with everyone on the show all the time, they always supported one another and presented a united front unlike some of the other relationships we’ve seen. They are among the few couples who escaped the reality TV curse and have now been married for over 17 years! Since being let go from the show, the Brooklyn couple moved to Australia with their two children.

Aviva Drescher didn’t last very long on The Real Housewives of New York City and she definitely went out with a bang (or should we say thud), but she was around long enough for fans to see her husband, Reid Drescher. She was on the show for two seasons (5 and 6) and during that time she seemed to rely on her husband a lot. The couple has now been married for about 12 years and although they appeared on Marriage Boot Camp back in 2015, they seem to be going strong! They are parents to four children, two from their previous relationships and two of their own.

Carole Radziwill and Adam Kenworthy might be one of the most unlikely match-ups we’ve seen, but somehow it works! Even though there is a 23-year difference between the two it’s actually one of the most solid relationships we’ve seen on the show, despite how much LuAnn might try to discredit it. Adam and Carole’s personalities compliment each other really well and it’s clear from the way they talk they highly respect each other and are completely smitten! Although the couple is reportedly taking a break after being together for two years, we fully expect them to reconcile at some point.

Heather Thomson was a main cast member on The Real Housewives of New York City for three seasons before she left after season 7. While on the show fans got to see snippets of her relationship with Jonathan Schindler, he didn’t play too big of a role in any of her storylines. Regardless, these two seemed like the perfect opposites. They seemed to balance each other out as Thomson was loud and opinionated and Schindler was a little quieter and more reserved. He was supportive of his wife but knew enough to let her do her own thing and not get too involved in the drama. These two have been married for nearly 15 years and have two children together, Ella and Jax.

(Photo by Cindy Ord/Getty Images for Hospital for Special Surgery)

Although Jill Zarin might not be the most beloved Housewife from The Real Housewives of New York City, there’s no denying her relationship with her husband, Bobby, was among one of the strongest and most endearing on this list. Just looking through Jill’s social media will show any fan just how much she adored her husband. This Housewife wasted no opportunity to gush over her beau. Jill and Bobby were in the first four seasons of RHONY before Jill was fired in a cast shakeup. These two have been through a lot together. Bobby was diagnosed with thyroid cancer in 2009 and again in 2015 when they found out it had spread to his lungs. Unfortunately, Bobby wasn’t able to beat cancer this time around and passed away this past January. Still, these two had the best relationship that we’ve seen on the show!