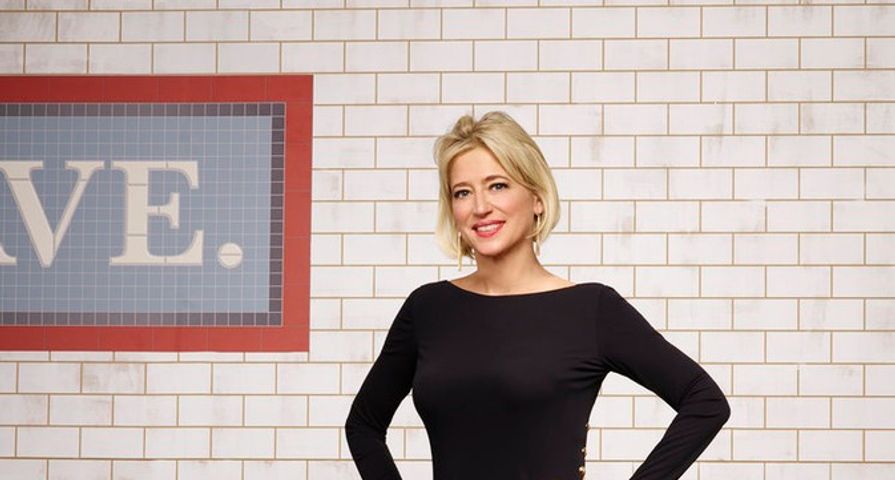 Dorinda Medley is one of the newer cast members on The Real Housewives of New York as she’s only into her second season, but already she’s making a name for herself! Dorinda is the epitome of a typical New Yorker — she’s loud, opinionated, doesn’t take any crap from anybody and she loves dirty martinis. We’re pretty sure she talks about martinis more than anything else on the show…but that’s another story! Despite her over-the-top personality and being on one of the most popular reality television franchises in North America, there’s a lot fans don’t know about Dorinda Medley. Here’s a list of 8 things you probably didn’t know about this New York housewife:

We hear her talk a lot about Richard, her second husband, but not much is known about her first marriage. Dorinda was first married to Ralph Lynch. Their marriage lasted for 10 years and, during this relationship she had her daughter, Hannah Lynch. Hannah was born while the married couple was living in London, and she can be seen in a few episodes of the Real Housewives with Dorinda. Ralph is now remarried, but still maintains a friendship with Dorinda. He’s now an Investment Banker at Springwell Capital Partners, but was previously the Senior Managing Director of Credit Suisse which is why him and Dorinda moved to London back in the ’80s.

8. Born in the Berkshires

She was born in the Berkshires of Western Massachusetts, so unlike the other city slickers on the show, she enjoys being in the countryside and she’s not afraid of getting her hands dirty. In fact, she still has a home there! Because Dorinda is often found in the Berkshires, she knew former housewife Heather Thompson before going on the show. After growing up in the Berkshires, she moved into New York City post-college to work in the showrooms for Liz Claiborne. Once she got her bearing in the fashion industry, she fled to London to be with her first husband and started her own company designing cashmere clothes.

Dorinda might only be into her second season of filming for The Real Housewives of New York City as a regular cast member, but she’s known some of the original housewives of quite some time. Her and Ramona Singer have a friendship that dates back over twenty years! Also, in previous seasons of the show Dorinda is present at many of the various functions and had even briefly appeared on camera before.

Dorinda isn’t only a New York socialite because she’s wealthy, or because she’s on a television show. Dorinda has been making a name for herself as a high profile socialite in NYC for quite some time now. In a city like New York, becoming a socialite requires more than just attending parties and sipping chardonnay. Dorinda has lent her name to various charities, made public appearances at various functions and worked hard to maintain relationships in the social scene.

Many people would assume that Dorinda’s net worth comes from her second husband, but she claims the vast majority of her fortune is from the success of her fashion line in London when she owned her cashmere shop. Although, its undeniable that her husband’s passing left her quite a bit of money as well, she’s now in a comfortable financial spot with an estimated net worth of $20 million. She eventually made her way to the top when she started her own company, but working at the bottom of the food chain back in her Liz Claiborne days helped give her the tools and expertise to start up her own fashion line and own a boutique.

When Dorinda moved to London to be with her first husband, she decided to start her own company. Even though she doesn’t act like she has worked a day in her life, Dorinda was actually quite the successful entrepreneur back in the day. She started a cashmere company called DCL Cashmere — the company serviced some of the UK’s most elite! One of her most devoted customers was Princess Diana. “It was 1989. I got Princess Diana to be one of my clients, and project [the company] forward with the British classes,” she said. Apparently the Princess was a huge fan of Medley’s designs and of the luxurious cashmere collection, so she would frequent the shop while in London. Another one of her famous devoted clients was Joan Collins.

When she left London after her first divorce, a newly single Dorinda moved back to the Big Apple and became a real estate broker, which is how she met her second husband, Richard. She sold him a swanky townhouse on the Upper East Side, and seven months later the two began dating. “If I had known I was going to be living there, I would have gotten the bigger townhouse!” Dorinda made her big bucks by specializing and only dealing with high end, pricey real estate.

Dorinda married her second husband, George Soros partner and hedge fund adviser Richard Medley, in an intimate dinner party ceremony in 2005. They were married until he suddenly died in 2011. “I’ve been presented with a lot of different challenges and that’s why I wasn’t afraid to be on the ‘Housewives.’ The whole point is to keep going forward and try again.” Richard and Dorinda had a great, but short lived marriage. While they were together they fund-raised for charities alongside celebrities like Desmond Tutu, Brad Pitt, Angelina Jolie and Hilary Clinton. Talk about rubbing shoulders with royalty! She helped raise millions of dollars for various charities that supported children in need, medical research or foundations who use their finances to help those looking to better their lives.

Many of the other housewives believe John is using Dorinda for her fame and money, but John Mahdessian is doing quite fine on his own in terms of finances. He is the owner of Madame Paulette, a cleaning business that has been passed down through his family. His father first took over the business back in 1959 and then John took over in 1987. Dubbed the “Sultran of Stains” by the New York Observer, John has managed to build this company into a well renowned business with high profile clients like Anna Wintour, Chanel, Donald Trump, Steven Spielberg and even museums like the MoMA. But how did he end up with Dorinda? As Dorinda tells the story, she met John through Richards surprisingly enough. She went out one night to meet Richard at a members only club in Manhattan and found Richard hanging out with John. John became a casual acquaintance of Richard and Dorinda as they would run into each other often out and about at various clubs, and soon after Richard passed away, Dorinda once again ran into John. When she broke the news of Richards passing to John, he asked her to lunch to console her and the two formed a friendship. Their friendship eventually blossomed into a relationship and they’ve been going strong ever since!