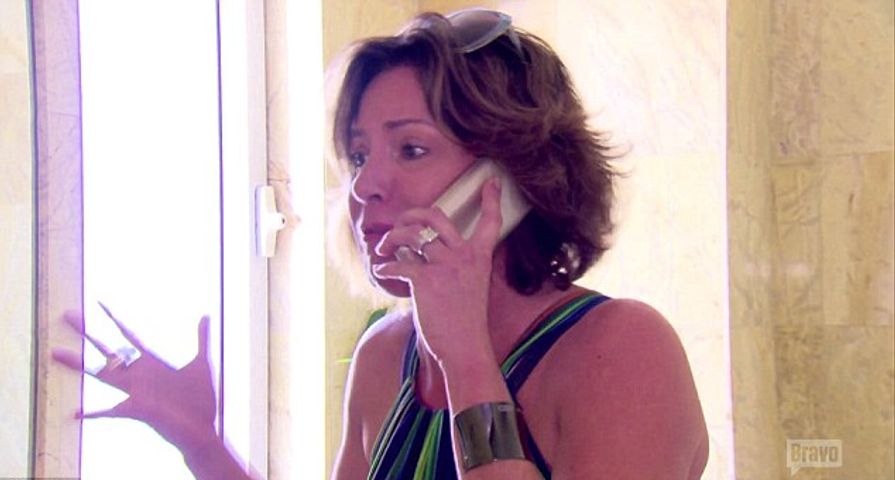 The reality television series known as the Real Housewives is all about drama and scandal. One of the most popular shows within the franchise is the RHONY and that’s because these women are not only rich, but they are some of the biggest business savvy socialites living in the big apple. The guaranteed drama that comes from filming a bunch of loud and opinionated women together fuels the shows entertainment factor, and the ladies love to up the antics when the cameras are around, but unfortunately for the producers of the show, sometimes the biggest drama happens off-camera! Here’s some of the biggest scandals from the women on The Real Housewives of New York City:

Sonja had just finished filming her first season of The Real Housewives of New York City with Bravo when she was pulled over by the cops while driving. She managed to stay out of the hot seat and away from any real conflict while filming, but it all caught up with her off camera. Sonja was pulled over early on a Monday morning in Southampton, New York after she blew through a stop sign at 2:16 a.m. She had been partying at a friends house for Memorial Day and, while she’s known for her partying ways, no one expected this! After getting pulled over, she then failed field-sobriety tests, refused to take a Breathalyzer and was charged with a DUI.

Kelly Bensimon was on The Real Housewives of New York City from season 2 until season 4 and during her time on the show she was famous for feuding with Bethenny Frankel and talking in nonsensical circles and her infamous breakdown on “scary island” while on vacation with the women in the Virgin Islands. During her first season of filming, Kelly was involved in a domestic violence scandal after she was arrested on March 5, 2009 for punching her then fiance, Nick Stefanov, in the face. The former model attacked him during an argument and gave him a black eye with a laceration under his left eye. The whole incident was extremely odd because afterwards Bensimon denied she was engaged to him even though he insisted they had been engaged for several weeks and together for 3 and a half years. In the end, Bensimon filed a restraining order against him and she was charged with a misdemeanor and third-degree assault. However according to NY Daily News, she made a deal with prosecutors to have the charge removed from her record. The rocky couple have been spotted together since the incident, but continue to insist they are not an item.

In more recent seasons of RHONY Luann seems to be a bit of a serial dater and is constantly seeking the attention of men, but loyal fans of the show will remember back to the first season when she was the self-righteous Countess married to Count Alexandre de Lesseps. The marriage ended abruptly when he told her via email that he met someone else! The French nobleman cheated with an Ethiopian woman in Geneva and broke the news right after their 16th wedding anniversary. Luann suffered some serious public embarrassment afterwards because she was promoting her book at the time, Class with the Countess, which had a chapter dedicated to her husband titled “How to Get a Man to Stay in Love.” Ouch! There were a lot of rumors floating around after their divorce was finalized that the two had an open marriage and that infidelity was a recurring issue between them.

Sonja Morgan’s legal and financial problems have been a hot topic on The Real Housewives of New York City throughout several seasons now, but it seems the worst is behind her as she’s now kicked off her own lifestyle brand and seems to have crawled out of debt. In an interview with E! Sonja said, “It’s over now. Its come to an end. The $9 million-plus is all there. It was $7 million judgement but with the administration fees, it was about another $2 million.” Her troubles were at the worst when she filed for Chapter 11 bankruptcy to protect her assets, but she said she’s managed to come out of bankruptcy and now has her financial privacy back. The whole mess stemmed from a failed business venture after her production company Sonja Productions and another company Hannibal Pictures Inc. tried to make a movie with John Travolta called Fash Flash to Bang Time. The movie was totally under Sonja’s financial backing, but then it fell through. Supposedly, Travolta had demands that couldn’t be met by Sonja, so he backed out (he had never actually signed a contract) and Hannibal Pics filed a suit against her for $7 million and won forcing Sonja to start counting her pennies!

During season eight, it seemed like Luann de Lesseps had finally found lasting love when she met and quickly got engaged to Tom D’Agostino. Unfortunately for the Countess, D’Agnostino was caught kissing another woman not long after he popped the question to her. When Bethany Frankel got a hold of some pictures of D’Agnostino’s infidelity and showed them to the other housewives and then to Luann, the Countess ultimately chose to forgive her philandering lover and instead directed her anger at Frankel. The cheating incident became a huge focal point during season eight, not only because of the incident itself, but also because D’Agnostino briefly dated Ramona Singer and also had a friends-with-benefits situation with Sonja Morgan prior to meeting Luann.

In 2014 rumors started floating around about infidelity in Ramona and Mario’s marriage. It was quite a shock because these two had been a staple couple on The Real Housewives of New York City show since the beginning. Mario had appeared on numerous episodes alongside Ramona and the two seemed to have a strong marriage, but only when the cameras were rolling. She initially filed for divorce back in January 2014, but didn’t follow through with the paperwork until August of 2014. During the season 6 reunion she fiercely denied any gossip about her marriage and flat out refused to talk about it with Andy Cohen. At the season 7 reunion, it was a whole different story! She completely opened up and even discussed the “horror story” moment when she walked in on him with his mistress, Kasey Dexter. Ramona said she held off on filing and didn’t want to discuss it because they were trying to work on their marriage, but she went through with it in August after she caught him for the second time. “I went to our home in South Hampton [after we had been apart for two weeks]…I was traumatized and on a lot of medication to deal with his infidelity. I had a feeling that girl would be there…she was in the kitchen. He was shocked to see me…it was such a horrible awkward moment. It was like a horror movie.”

In 2015, the quiet and usually level-headed housewife Kristen Taekman found herself right smack in the middle of a big, ugly scandal. The infidelity website Ashley Madison suffered a massive hack when their list of subscriber’s was released to the public. Taekman’s husband, Josh, was among the avid users of the site and was listed as a subscriber from 2011 to 2014, accessing the site a whopping 62 times under the name “Mr Big NYC.” At first he denied all allegations, but eventually fessed up to using the site and claimed it was simply a joke and that he never actually used it for its intended purposes. Shortly after all of this leaked, Kristen announced she would not be returning for the next season of Real Housewives and claimed it was so she could focus on her other business ventures and family. She has remained by her husband’s side through all of this and the couple appear to be working on their marriage.