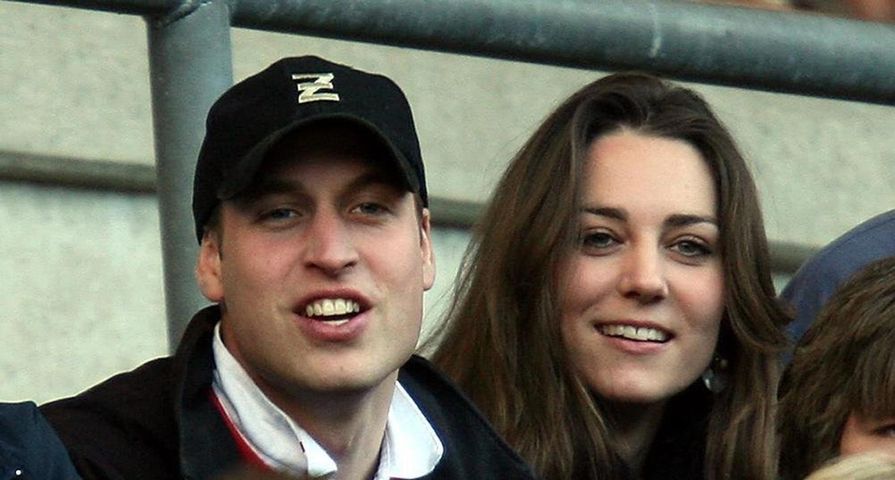 Prince William and Kate Middleton had been together for close to a decade when they were finally married in 2011 and, because of this, there are a lot of pictures of the two of them together, many of which we’re familiar with. We have collected some rare pictures of the couple that most people haven’t seen:

Prince William and Kate Middleton used to hit up the town before they were married. Here they are in October 2007 leaving Boujis Nightclub after a night of partying, but you’d never know that that was what they were doing by looking at them. Kate, in particular, looks sober and so does William.

The newly married couple attended the Derby Festival at Epsom Downs Racecourse in June 2011. Kate looked elegant in an off-white fitted jacket with a white dress underneath. She accessorized with a cappuccino-colored hat and a pair of nude pumps. Prince William went all out and wore a top hat and tails.

Prince William and Catherine arrived at the Only Connect Charity Centre, which works with the justice system to reduce re-offending. Kate looked lovely as always in this brown Orla Kiely dress with brown tights and Aquatalia ankle boots while William looked dapper in a navy blue suit.

In 2016, Prince William and Kate Middleton visited Queen Elizabeth Olympic Park with Prince Harry. Kate looked gorgeous in a white blouse by Goat and a patterned skirt by Banana Republic. William is one lucky man!

In March 2007, Kate Middleton accompanied Prince William to The Cheltenham Festival. It was just a month after this that the couple broke up. The reason for the split – William was acting like a single man and Kate wanted more of a commitment from him. The break didn’t last long and by the summer they were back together.

Before their own nuptials, the couple attended their friends’ Harry Mead and Rosie Bradford’s wedding in October 2010. At this point, Wills had already popped the question to Kate and she had accepted. They didn’t formally announce their engagement, however, until November 2010. They had been together, off and on, for nine years, at that point.

Shortly after their wedding in 2011, the Duke and Duchess of Cambridge visited a UNICEF Supply Division Centre in Copenhagen, Denmark. There they helped pack U.N. emergency supplies that were to be sent to areas of East Africa that were suffering from food shortages.

During their three-day tour of Germany in 2017, the royal couple met with researchers at the stem cell research lab to learn about their work. They both fit in so well at the lab in their lab coats – they look like real scientists!

Prince William and Kate Middleton watched a rugby match between England and Italy at the RBS Six Nations Championship at Twickenham Stadium. The two looked like they were trying to keep a low profile, but the press wouldn’t have it. They wanted to photograph the most famous couple in the world.

A month prior to their wedding, the soon to be married couple visited Northern Ireland. In this photo, they were visiting Belfast City Hall. Kate wore this Burberry trench coat with a pair of black suede Marvin K “Rumba” boots while William wore a navy suit. It was a good look for the couple!

On the final leg of their tour of the Far East, the royal couple visited the tiny Pacific Island, Tuvalu, where they dressed in traditional garb and participated in a cultural dance. It looked like the two had a really good time!

This picture was taken just three weeks before the couple’s wedding. They were visiting East Lancashire in north-west England where they visited Aldridge Community Academy (DACA), unveiled a plaque and viewed a range of outdoor sports activities.

Prior to their lavish 2011 wedding, the engaged couple attended the Teenage Cancer Trust Christmas Spectacular in Norfolk at the Thursford Collection in December 2010. It was their first outing after announcing their engagement.

When Kate Middleton and Prince William were expecting Prince George back in March 2013, they visited Child Bereavement UK, a nonprofit that helps families that are mourning the loss of a child. William has served as a patron of the charity since 2009.

Prince William and Kate Middleton were at Beaufort Polo Club for his birthday in 2008 with some friends. This was long before the two of them were engaged or there was even talk or marriage. She was still patiently waiting for him to make a real commitment.

Prince William and Kate Middleton never share any affection for each other when they are in public, which is why this picture from the 2012 Olympic Games is so special. Here they are embracing each other as they cheer on Britain during the track cycling finals.

During their three-week tour of Australia and New Zealand, Prince William got into the cockpit of a World War I Sopwith Pup single seater biplane at the Omaka Aviation Heritage Center while they were making a four-day stop in New Zealand. It looked like Kate was having a really good time!

Following the earthquake in Christchurch in 2011, the couple met with the deputy High commissioner Belinda Brown at the New Zealand High Commission in London to sign the book of condolences in memory of those who lost their lives in the earthquake.

The Duke and Duchess of Cambridge attended the wedding of Laura Bechtolsheimer and Mark Tomlinson in Arose Switzerland in March 2013. The Duchess looks absolutely lovely in this picture with her perfectly coordinated brown hat and a beige coat.

In March 2008, together they took a ski trip to the Swiss resort Klosters, which is where his parents used to ski as well. The two are pictured here on a T-bar looking really serious. Maybe they knew that there was someone there photographing them?

The royal couple watched a swimming race at the Tollcross International Swimming Centre during the 20th Commonwealth Games in Glasgow, Scotland, in 2014. They seemed to be having a good time together. At one point, William was seen using Kate’s pass to fan her!

During their Diamond Jubilee Tour of the Far East, the couple stopped in Kuala Lumpur, Malaysia, where they visited the Assyakirin Mosque. Keeping with religious protocol, Kate covered her hair with a scarf and both removed their shoes before entering.

The Duke and Duchess of Cambridge joined Prince Harry in a relay race for the charity, Heads Together. Harry ended up beating both William and Kate and then William placed second while Kate placed third. None of them were even dressed for a race!

In 2005, Prince William and Kate Middleton graduated from University of St. Andrews. This picture is from their graduation day. Kate looks like she is madly in love while William looks so dashing. We can thank the Middleton family for this photo! It is from their family photo album.

The couple – who were engaged at the time – attended a service of dedication for a new RNLI lifeboat at Trearddur Bay Lifeboat Station in Anglesey, Wales, in February 2011. They had been keeping a low profile since they announced their engagement, so this appearance was a big deal and one that the town was anticipating. William and Kate didn’t disappoint!

The royal couple toured New Zealand in 2014 and one of their stops was at the Rippa Rugby Tournament at Forsyth Barr Stadium. Both Kate and William were given a team of youngsters to coach and William’s team ended up beating Kate’s by a score of 30-20.

Prince William and Kate Middleton visited Centrepoint Camberwell Foyer in December 2011. For the visit, Kate wore a long-sleeved olive-colored turtleneck dress with a black belt, which made her look pencil-thin. William dressed casually in a pair of navy pants with a white dress shirt and a blue sweater over top.

The day after their extravagant wedding, the two were seen walking hand in hand from Buckingham Palace to catch a helicopter that was waiting on the palace grounds to take them for a private weekend away in the U.K. The two look surprisingly relaxed considering that it was their wedding the day before!

For thanksgiving service at St. Paul’s Cathedral, Prince William and Kate Middleton were dolled up in their finest. She donned a pale pink Alexander McQueen dress, LK Bennett heels and a Jane Taylor hat while he wore a morning suit.

In 2011, the engaged couple returned to University of St. Andrews, their alma mater, for its 600th-anniversary celebrations. The two met there in 2001 when they were both living in St. Salvatore’s Hall and studying Art History. A romance between them began to blossom in 2002 after Kate took part in a fashion show where William saw her wearing a see-through dress.

Prince William and Duchess of Cambridge attended the Commonwealth Day service in 2016 in style. She rocked this gray hat by John Boyd with a gray coat dress by Erdem and matching Rupert Sanderson heels. Her coat had quite the pattern!

Prince William can be seen here giving Kate Middleton a hug after he played a rugby match at Eton College back in March 2006. Kate attended the match with her sister Pippa, who can’t be seen in this picture because the couple is blocking the view.