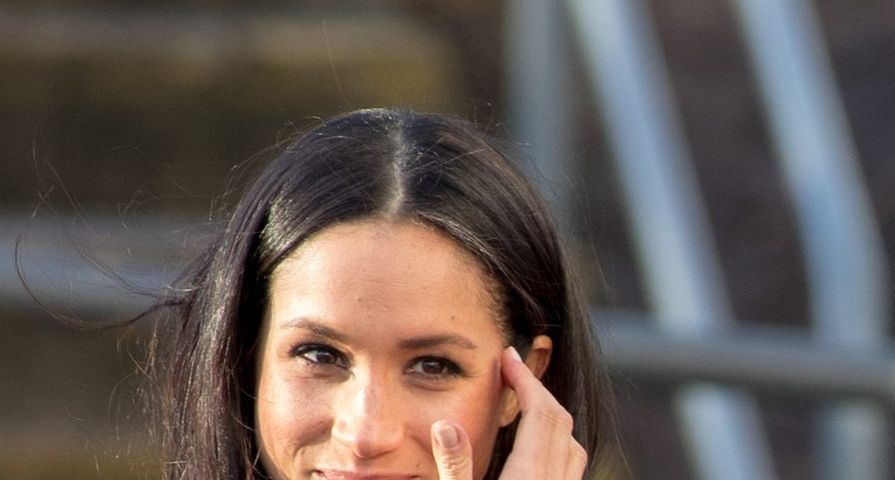 The world has been watching Meghan Markle’s every move ever since she and Prince Harry first went public with their relationship. Once Meghan officially married into the royal family, she was given a guideline of certain rules and traditions that she is expected to follow as Duchess. While these protocols aren’t necessarily written in stone, they’ve been a royal tradition for a very, very long time. There’s no denying that Meghan is extremely poised and well-kept, especially when cameras are around, but it’s also become increasingly clear that she and Prince Harry are looking to forge their own path among the royal family. Check out these 22 times Meghan Markle broke royal code:

Royals aren’t allowed to sign their autographs. This rule is to prevent their signatures from being forged. Meghan Markle, however, bucked with this tradition and signed 10-year-old Caitlin Clark’s autograph book. She wasn’t the first royal to break this protocol. In 2010, Prince Charles gave his signature to victims of a flood in Cornwall.

Royals aren’t permitted to discuss politics. At the 2018 BAFTAs, Kate Middleton avoided making a political statement and chose to wear a dark green gown with a black ribbon instead of a black dress to show solidarity with the #MeToo and Time’s Up movements. Meghan Markle, however, chose to make a statement about the movements during the first annual forum for the Royal Foundation. “Women don’t need to find a voice,” she said. “They have a voice. They need to feel empowered to use it, and people need to be encouraged to listen.” She also stressed how important Time’s Up and #MeToo are. “We’re seeing so many campaigns – #MeToo, and Time’s Up. There is no better time than to really continue to shine a light on women feeling empowered and people really helping to support them, men included in that,” Markle said. “It makes such a tremendous difference.”

20. She Stepped Down as a Senior Royal

In one of the most unprecedented moves in royal history, Prince Harry and Meghan Markle announced in January 2020 that they would be stepping down in their roles as senior members of the royal family. They wrote, “After many months of reflection and internal discussions, we have chosen to make a transition this year in starting to carve out a progressive new role within this institution. We intend to step back as ‘senior’ members of the Royal Family and work to become financially independent, while continuing to fully support Her Majesty The Queen.”

19. She Closes Her Own Car Door

While closing a car door may seem like a normal task for the average person, it’s not for a royal! Typically members of the royal family have staff to help them with mundane tasks like closing doors, but Meghan broke this rule when she unexpectedly shut her own door at an early public appearance with the royal family.

In the past, it’s been uncommon for members of the royal family to participate in a baby shower, but Meghan Markle broke this tradition when she was pregnant with Archie.  The Duchess of Sussex traveled to New York City for an extravagant gathering hosted by her celebrity friends Amal Clooney and Serena Williams.

Lady Diana broke tradition when she married Prince Charles and refused to vow to obey her husband. Meghan Markle and Kate Middleton followed suit when they said their own vows to their royal husbands and skipped out on the obey vow that had been a tradition in the past.

15. Her All-Black And Neutral Outfits

Queen Elizabeth is known for her bright, eccentric wardrobe and almost always steps out wearing a bold pop of color. The Duchess of Cambridge Kate Middleton has seemingly followed suit and tends to lean towards colorful pastels and bright pieces within her own wardrobe! Meghan Markle, however, has proved with her time in the royal spotlight that she has continued to stay true to her love of neutrals and black despite her new royal title.

14. She Wears Pants Over Dresses

One of the Queen’s preferences for the Duchesses is that they opt for skirts and dresses over trousers when it comes to public engagements. Meghan Markle, however, being the feminist and fashionista she is, has overlooked this rule multiple times throughout her royal reign. A trouser set can be just as sophisticated and elegant as a dress, and we’re glad that Markle realizes this as well despite the Queen’s opinion!

Typically it’s expected that royal women dress prim and proper and groom themselves to perfection. Kate Middleton consistently has a perfect sleek blowout without a hair out of place. Meghan, however, has opted for a more effortless approach when it comes to her style. She favors messy, undone hairstyles like a loose bun with tendrils left out framing her face which many viewed as breaking protocol.

12. She Talked to the Media About Their Relationship

There’s a reason we never read any interviews from the royal family in our favorite magazines. They like their privacy, and they like to control what information is made public knowledge. While it isn’t completely unprecedented (Kate Middleton was on the cover of British Vogue), it’s definitely not common. Before the two even announced their engagement, Markle spoke to Vanity Fair about her relationship with Prince Harry. She said: “I can tell you that at the end of the day I think it’s really simple. We’re two people who are really happy and in love. We were very quietly dating for about six months before it became news. And I was working during that whole time, and the only thing that changed was people’s perception. Nothing about me changed. I’m still the same person that I am, and I’ve never defined myself by my relationship.”

This one might seem silly, but the Duchess of Cambridge and Prince William follow it religiously. It’s an unspoken rule that couples in the royal family do not hold hands in public. According to royal etiquette expert, Myka Meier, this is because when a royal couple like Prince William and Kate Middleton are making a public appearance they “are working representatives of British Monarchy,” so they want to present a professional appearance. Meghan Markle and Prince Harry have now broken this rule on several occasions. The first time we saw it happen was during their appearance at the Toronto Invictus Games and they’ve continued to show PDA ever since.

10. Christmas with the Queen

In 2017, Meghan Markle made history after she was invited to spend the holidays with Prince Harry and the royal family. In 2010 Kate Middleton famously wasn’t allowed to spend Christmas with the royal family even though she and Prince William were engaged at the time because the royal protocol is that only spouses are allowed to attend the Queen’s festivities at her private residence in Norfolk. According to online reports, Meghan was invited this year because Prince Harry asked the Queen to make an exception.

9. Getting Married on a Weekend

Almost every popular royal wedding (Prince William and Kate Middleton, Princess Diana and Prince Charles, and the Queen and Prince Philip) takes place during the week, but not Meghan Markle and Prince Harry’s! Not long after they went public with their engagement, the Kensington Palace announced they decided to get married on Saturday, May 19, 2018.

8. This Will be Her Second Marriage

Arguably the most shocking thing about Meghan Markle is the fact that she’s been married before! While it’s not against any law or formal rule in the British monarchy, it’s definitely unusual. In the past, it wasn’t allowed. Remember when Princess Margaret had to end her relationship with Peter Townsend because he was a divorcee? There was also Edward VIII who had to abdicate in order to follow through with his marriage to Wallis Simpson. Meghan was previously married to producer Trevor Engelson. They began dating in 2004, got married in Ocho Rios, Jamaica on September 10, 2011, and later divorced in August 2013.

13 Most Dramatic Royal Wedding Moments Ever

According to online reports, Meghan Markle was going to have the traditional bridesmaids and maid of honor for her wedding. A maid of honor (or Matron of Honor) is customary for a traditional wedding, but not so much for a royal wedding whereas Chief Bridesmaid is the British custom. A source at Us Weekly said, “The day of the wedding itself will certainly hold a few unconventional surprises. Don’t expect a royal wedding by numbers. They want to involve their friends and family in as much as possible throughout the day.” As the wedding day approached however it seems that Meghan leaned more toward royal protocol, and their wedding party was actually filled with the children of their close friends and family.

Not only is this Meghan’s second marriage which is very unusual for a royal relationship, but she’s also considered to be just an ordinary person from America which is definitely breaking the mold. True, she’s a famous actress which meant she was in the public eye prior to meeting Prince Harry, but unlike Kate Middleton who comes from a posh British family, Meghan is basically just a ‘normal’ person.

5. She Carried a Tote Not a Clutch

There is one fashion rule that all royal women tend to follow and that’s to use either clutch bags or purses with a small strap. This is so that they can avoid shaking hands with people if they don’t want to. According to etiquette expert William Hanson, it’s protocol “that you do not extend your hand to any member of the royal family (blood royal or those who have married into the family) unless their hand extends first.” During one of her first appearances since announcing their engagement, Markle was seen toting a tote bag so her hands were free to shake everyone’s hand.

Similar to the purse of choice, wearing pantyhose is not a fashion rule that’s set in stone, but it’s been a long-held tradition upheld by royal women before her including Queen Elizabeth and Kate Middleton. Meghan Markle has been photographed not wearing pantyhose on several occasions, most notably in her and Harry’s engagement photocall.

Lavish Royal Honeymoons Over The Years

Meghan Markle’s engagement ring is gorgeous but surprisingly untraditional. While diamonds are always a go-to for engagement rings, the royals tend to prefer gemstones. Kate Middleton wears the late Princess Diana’s ring which was a sapphire, and this was also the preferred choice for The Queen Mother and Princess Anne. Other royals like Sarah Ferguson and Princess Margaret sported a ruby engagement ring.

Surprising Ways These Royal Couples Met And Fell In Love

While it isn’t a deal-breaker to not be an Anglican and belong to the Church of England, it’s definitely out of the ordinary that someone who is not a member would marry into the family. According to People, “in order to remain in the line of succession, members of the royal family cannot be Catholic.” In the past, it has always been forbidden for royals to marry a Roman Catholic, but in 2015 an amendment was made to the Act of Settlement of 1701 which allowed for interfaith marriage.

Similar to the unwritten rule about hand-holding in public, there’s another etiquette most female royals follow when sitting down. Instead of crossing their legs like the rest of us, there is what’s called “The Dutchess Slant,” which is what Kate Middleton always follows, and was the late Princess Diana’s preferred choice as well. According to Meier, this is the preferred pose when being photographed front on. “It is the perfect pose for when a camera is shooting directly in front of you because by slightly slanting the knees to create a zig-zag effect when wearing a dress or skirt, your legs are angled so that the camera only shoots the sides of your legs and protects your modesty,” she said. 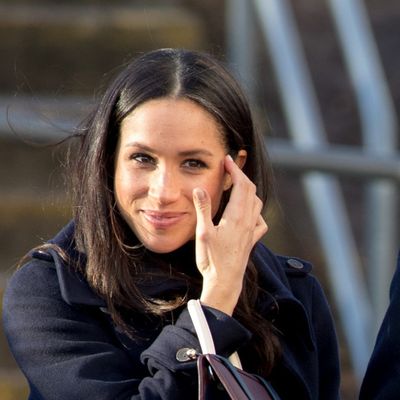