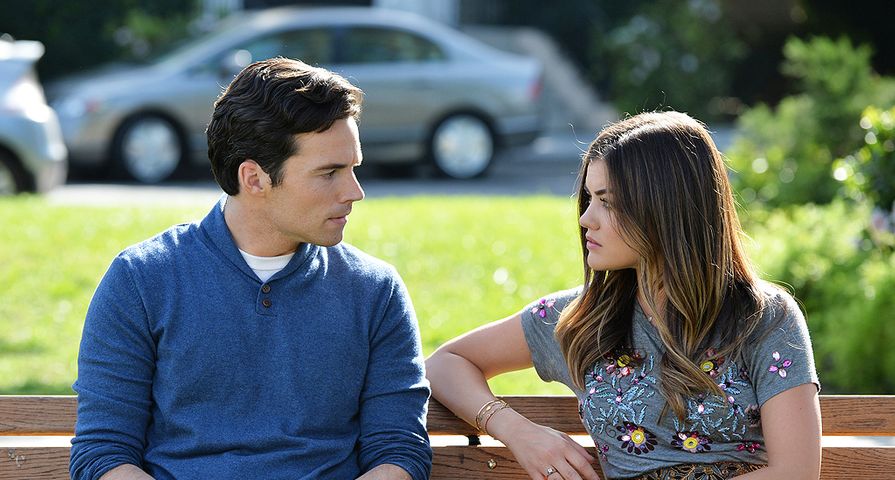 Pretty Little Liars comes from a popular book series of the same name, but became one of the best shows on television! The American teen drama, mystery-thriller has managed to keep its audience captivated since it first started back in 2010, mainly because it’s full of crazy twists and turns as it follows a group of girls being terrorized by a mystery villain by the name of ‘A.’ During its time on air, we’ve seen a lot of couples come and go on the show (some better than others)! Here are 15 of the most popular couples on Pretty Little Liars ranked from worst to best!

This relationship is most definitely the worst coupling on the show, mainly because Sara Harvey ended up being one of A’s accomplices! When all the girls were rescued from captivity, Sara Harvey was discovered as one of the victims. Oddly enough, Emily ended up taking Sara in which seemed weird considering she barely knew her. She could have been A for all they knew! The two engaged in a brief relationship while they bonded over their experience being captured. Things got really creepy when it was revealed that Sara was working against them. After their relationship ended, Sara continued to taunt the girls and make things even more awkward and uncomfortable for Emily!

Ashley Marin starts hooking up with Officer Darren Wilden early on in the series to protect Hanna from getting into further trouble with her shoplifting charges. Although Ashley is using Darren, it quickly becomes clear that he’s also using Ashley to get to Hanna. He suspects Hanna had something to do with Allison’s murder and so he starts taunting her by showing up unannounced at the house, flaunting his relationship with her mom and asking inappropriate questions. The whole thing is super creepy and ends up getting both Hanna and Ashley into even more trouble. This match-up is definitely one of the worst.

Hanna’s mom had a number of relationships in the first few seasons of the show. She began secretly hooking up Jason DiLaurentis after he offered her a job at his company. Ashley needed to pay the bills, so she took Jason up on his offer. The problem with this almost-relationship is that Jason is closer in age to Ashley’s daughter than he is to her. Plus he once hooked up with one of Hanna’s best friends, Aria! How weird is that? What makes this relationship even worse is that she cheated on the lovable Pastor Ted when she hooked up with Jason (more than once).

Another creepy relationship that was never fully explored or explained is Noel and Jenna. Noel and Mona broke up in season 2 which is when he starts dating Jenna — the one girl at school who the girls fear more than Mona. Their relationship seemed to fizzle away as they were no longer seen together. We don’t know much about their relationship, but we know what these two are like on their own which isn’t good. This makes them one of the worst relationships on the show.

This relationship might have been a little less weird if it didn’t happen while Mona was still Aria’s arch enemy. Noel and Aria didn’t seem to have the closest sibling relationship, but he still knew Mona had been terrorizing his sister and her friends and that she ran down Hanna with her car! Mike was dedicated to Mona even after he got a taste of her manipulation and realized she had faked her own death. It’s still unclear how ‘real’ this relationship was because Mona is so hot and cold with the girls. We know she was working with ‘A’ for a while but then was also a victim. Either way, these two were not the subject of a great love story and we’re glad their relationship is over!

This relationship never really happened but seemed to be just below the surface for a really long time. Viewers find out that Alison and Emily enjoyed a bit of a mild flirtation prior to her disappearance through flashbacks and none of the other girls knew about it. It was hard to tell if Alison really cared about Emily or if she was simply toying with her feelings. Emily goes above and beyond for Alison, but Alison doesn’t seem to share the same dedication. We’ve seen Emily hurt by her love interests far too many times, so we’re thinking when it comes to this relationship, better safe than sorry. It should be shelved and never revisited.

These two definitely had a rocky relationship throughout the entire series. Early on we find out that Byron had an affair with a woman named Meredith. The two managed to move past it for a while, but it seemed like it was too good to be true because eventually, right before season 3, the two of them split up for good. Despite both dating other people and Byron being extremely deceptive about his affair, they are great co-parents. In season 6, these two unexpectedly announce that they are getting back together. While Aria is pretty shocked, it seems like the right thing. She officiates their wedding when they tie the knot (again) in a beautiful, backyard ceremony. It’s incredibly sweet!

The second half of season 6 began with the girls coming back to Rosewood after being away for five years. During this jump in time, a lot of things happened. Two of the main power couples had broken up — both Toby and Spencer and Caleb and Hanna. In an odd twist, Spencer and Caleb had grown quite close, even though they had never shown any particular interest in each other before. Not only was it weird that Spencer was crushing on her best friends first love, Caleb also happened to be one of Toby’s best friends! Hanna is clearly not completely okay with her best friend hooking up with her ex. While it was nice these two found each other after their exes had moved on, it seemed kind of unnatural. We’re still iffy on this relationship.

A lot of people really liked these two together, and while Paige did eventually grow on us as a person, this relationship definitely had its fair share of ups and downs. Paige was a great source of support for Emily during a lot of tough times and she proved she was willing to go to great lengths to protect Emily, but sometimes it was hard to tell whose side she was on. She leaked information to the police about A behind Emily’s back and when they first met each other, Paige tried to drown Emily in a pool! They eventually started dating, but their relationship was unstable as it was on and off for several seasons. Eventually, Paige moved to California and Emily didn’t follow her…which is probably for the best.

How could anyone not like Ted Wilson? He was first introduced in season 3 as the pastor of Rosewood Church and was such an incredibly sweet man who wooed Ashley Marin into dating him, and then eventually proposed to her! We loved seeing them together especially after Ashley had such a string of bad relationships with her ex-husband and then Darren Wilden. The problem with Ted is that he was too nice, which meant that he was totally unaware of all the ‘A’ drama happening around him. Ashley ended up breaking his heart by sleeping with Jason. They tried to work through it, but Ashley broke things off because she felt like he deserved better.

Even though Spencer and Toby, also known as Spoby, were one of the most popular couples on Pretty Little Liars and one of the longest lasting relationships, we must admit near the end they weren’t a perfect match for each other. It seemed like their relationship was on shaky ground long before the five-year jump when we see Spencer and Toby break up over the possibility of an unexpected pregnancy. Toby was conflicted when he became a Rosewood cop and Spencer had to do a lot of sneaking around behind his back, and in the end, it seemed clear these two are destined for two completely different futures, but they still found their way together!

Emily and Maya first met in the pilot episode when Maya’s family moves into Allison’s old house. It doesn’t take long for them to spark up a relationship. Unfortunately, the odds were against them, and so was Emily’s mom. When she finds pot in Maya’s bag, she tells her parents and Maya gets shipped off to a camp for juvenile delinquents. It was an important relationship on the show because it forced Emily to admit to her parents that she was gay and it was her first real relationship with a girl. Maya and Emily are eventually reunited in season 2, but not for long. Maya goes missing. At the end of the season, Emily learns that Maya has been murdered and was found in the DiLaurentis house. If ‘A’ hadn’t gotten in the way, these two would have had a pretty great relationship.

As much as we are pro Haleb (Hanna and Caleb) we must admit that Jordan is pretty amazing. He treats Hanna well, offers her the life she wanted in New York City, is interested in fashion like Hanna and genuinely cares about her, even when she doesn’t make the right decisions. The big problem with Hannah and Jordan as a couple is that she belongs with Caleb, so it was inevitable that they would break up.

While this relationship was initially wrong on so many levels, it was painted as true love which is why they got away with having Aria hook up with her teacher for so long and fans were okay with it. Things were never stable for very long between Aria and Ezra and their relationship took a really bizarre turn when Aria found out that Ezra once had a relationship with Allison before he met Aria and that he was writing a book about her friends! Things got pretty creepy for a while, but things got back on track. Despite their crazy ups and downs, Aria and Ezra genuinely cared about one another and always pursued each other’s happiness before their own, which is the definition of true love!

Every show has that one couple who is meant to be together, through thick and thin and will always have fans rooting for them no matter who else they meet. Hanna and Caleb are this couple on Pretty Little Liars. When the show comes back from the five-year jump, viewers learn their relationship didn’t last and that they broke up because Caleb only moved to New York City for Hanna and that she was more invested in her career than she was in him. If it weren’t for all this, these two would never have broken up. Their chemistry is undeniable. Aside from their major break up, they’ve had the most stable relationship throughout the entire series, and at the end of season 6 we find out that Hanna actually did go back for Caleb and this two end up getting married and having a child!