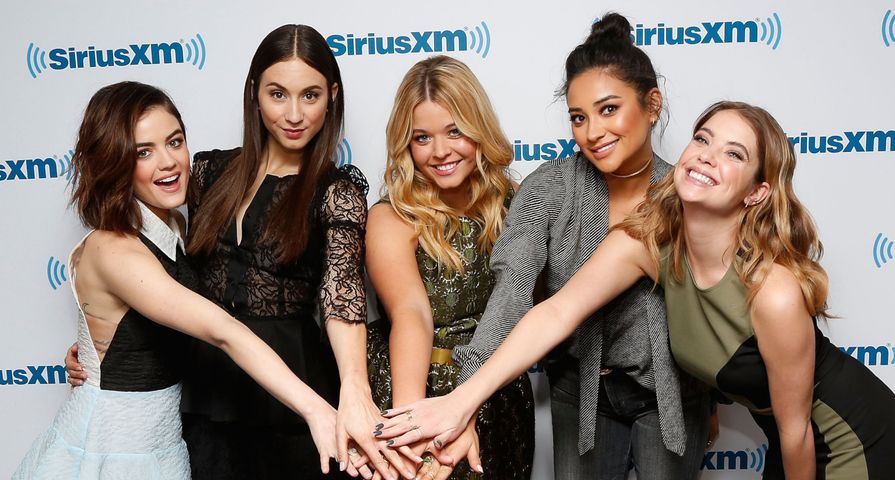 Pretty Little Liars was a huge success over the course of its seven seasons. The American teen drama, mystery thriller was loosely base on the popular book series by Sara Shepard and followed a group of high school girls who were being taunted by a mysterious villain named ‘A.’ The show had an extremely strong fan following and managed to uphold its popularity throughout all seven seasons. Check out our list of 14 behind the scenes secrets from Pretty Little Liars!

Television production requires a lot of long days on set, and this was no different for Pretty Little Liars! The girls had to make themselves at home as they were forced to spend a lot of time hanging around set in between filming. Thankfully, there were some pretty comfy spots to hang out. One of their favorites was on the couch in The Brew, Ezra’s book-store-turned-coffee-shop.

Ashley Benson wasn’t too fond of the storyline that involved her being run over by a car. This was because she was stuck wearing a cast for three weeks. “I wish I never got run over, because I had to be in a cast for like three weeks. Every day. And, like, I couldn’t get out of it until we finished, so it was really annoying having to go around in a wheelchair, or, like, hope around the set. It wasn’t fun,” said Benson.

The season 4 winter debut which aired in January 2014 was the most-tweeted season premiere in history! The social media site was flooded with more than 30,000 tweets per minute while the show was on air. As a result, Pretty Little Liars now goes down in history as one of the Top 5 most-tweeted TV series telecasts on record with eight episodes now collecting more than a million tweets during their time on screen.

Many of the actors and actresses on the show are playing characters who are way younger than them, except for Sasha Pieterse. While filming the pilot episode of Pretty Little Liars, Pieterse was only 12! When Bianca Lawson came on the show to play the character of 16-year-old Maya, she was actually 31 and in season 1, when Spencer Hastings was 16, Troian Bellisario was actually 25. In fact, Troian is older (by 11-months) than Ian Hastings, who played Ezra Fitzgerald, her high school teacher.

The opening theme song, “Secret” by The Pierces is now a trademark of Pretty Little Liars. According to Ashley Benson, she’s the one to thank for finding that song for the show! “I have to take some credit here, because I was the one who brought that song to the producers and told them ‘You have to have this as the opening credits song.’ …It’s just so spooky and eerie, and it’s perfect for the show,” she said.

9. From Auditions to Castings

When Keegan Allen first auditioned for Pretty Little Liars, he wanted the role of Wren. Similarly, when Shay Mitchell originally auditioned for the show, she wanted to be Spencer Hastings. “I originally read for Spencer, but there’s no one that could’ve played Spencer better than Troian. All of the girls just fit their characters so well. Don’t get me wrong: there are times where I’d love to swap with Hanna’s closet. I love playing with fashion,” said Mitchell. Also, when Brant Doherty showed up for the casting, he auditioned for both Ezra Fitz and Toby Cavanaugh before he was ultimately cast as Noel Kahn.

The letter ‘A’ is hidden somewhere on pretty much each and every Pretty Little Liars set. For example, when the cabin burst into flames while the girls were trapped inside, many viewers might not have noticed, but the flames spelled out the letter A before the lodge completely went up in smoke. However, some aren’t as obvious as that. It could be a simple decorative ‘A’ in the background like in the picture below. “Our wall of As has grown over the years. You might see these in the background once in a while if you look closely,” said Brant Daugherty, who played Noel Kahn.

Pretty Little Liars takes place in the fictional town of Rosewood, Pennsylvania. Even though it’s not real, the location is actually based on a real place — Rosemont, Pennsylvania! Rosemont is an expensive suburb near Philadelphia. It’s also the inspiration behind the setting of former daytime drama, All My Children.

The restaurant that is frequently visited by the girls on the show, Apple Rose Grille, used to be Luke’s diner on Gilmore Girls! There are a few other outdoor sets depicting Rosewood that are the same as Stars Hollow in Gilmore Girls, like the town square. It’s also the same set used for Witches of East End, The Carrie Diaries and Hart of Dixie.

The character Jenna was played by actress Tammin Sursok. She had a pretty big role on the show in the first few seasons, but then stopped because she became a mom! While filming season 4, Sursok was pregnant with her daughter, Phoenix. Producers had to get creative while filming so viewers wouldn’t be able to see her growing belly.

4. The Set is Really Cold

In a behind the scenes interview with Rolling Stone, Troian revealed who or should we say what is her best friend while on set. “Let me introduce you to my best friend, my coat. Sets are basically like meat freezers, because the crew gets hot working under the hot lights. If they are cold, they get to wear a coat. But me? I’m usually wearing some really tiny dress or skirt. So in between shooting, I basically live in a sleeping bag,” she said.

It’s a well-known fact that the leading ladies of Pretty Little Liars all share a really close friendship off-set. Shay describes Ashley Benson as the little sister she never had, especially since Benson is all about the pranks. “Ashley pretends that she gets burned by the curling iron by one of our hairstylists all the time and then they actually freak out. Or she’ll throw a little temper tantrum as a joke. The inters are always like ‘OMG,'” said Mitchell. On Mitchell’s birthday, Benson surprised her by dancing to Beyonce in her fat suit! Now that we’d like to see!

In an interview with Buzzfeed, the ladies dished about what their least favorite scenes to film were. For Sasha Pieterse, who plays Allison DiLaurentis, she said she wished her character never got buried alive. “This is a selfish thing, just because I didn’t like filming it, but it was cool. I wish I never got buried alive. I mean, like, the actual process, me physically underground. It was really cool, but I had dirt in places that I would never want dirt in places,” she said.

When asked which scene freaked them out the most, the girls answered with the season premiere/season 3 finale episode when the girls open the trunk of Wilden’s police car and find a dead pig! “The one that freaks me out, I think, is when we open the trunk and there’s a dead pig. That was a real dead pig, by the way. It was a real thing — it smelled so bad we almost threw up everywhere,” said Benson. Troian Bellisario said the scene when Spencer and Hanna return to Radley and find the doll in the bathtub was also terrifying because they filmed that scene at midnight on a Friday.