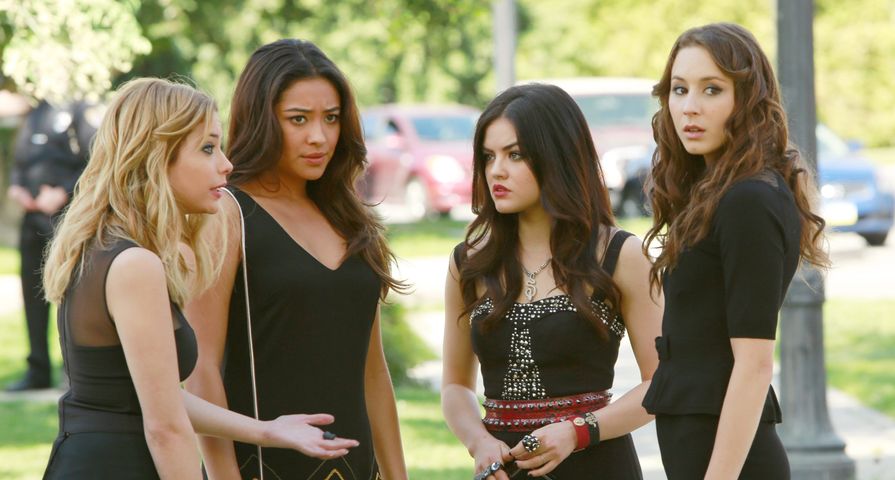 During its seven season run, Pretty Little Liars constantly shocked its viewers with endless unexpected twists and turns. Whether the girls were strutting down the hallways of Rosewood High, being locked in a basement dollhouse or burying evidence in the middle of a forest, the one thing these liars never surprised us with was their consistently chic sense of style. While Spencer’s style tended to be structured and tailored, Hanna often opted for trendy and glamorous. Similarly, while Emily leaned more towards a sporty-chic vibe, Aria opted for an eccentric vintage style. Although the liars all had diverse tastes when it came to their fashion choices, each of them kept us always wanting to tune in for more style inspiration. Follow along below for 10 of the best fashion moments from Pretty Little Liars‘ seven season run:

The orange-toned stripe dress Hanna wore during this season 3 episode was a definite fashion show stopper. The knit dress was form-fitting and flattering and featured an understated citrus-color scheme. She topped the dress with a pair of chunky wedge heels that had interesting black detailing to pick up on the black neckline of the dress. It was a rarity to see Hanna with her blonde waves in an updo, so this messy look definitely stood out in comparison to her other styles. Her gold bangles were the perfect compliment for this winning style moment.

Aria’s style from season one was definitely a notable style period for the show. The producers attempted for eccentric Aria to stand out and played up her style with vintage pieces to portray her unique and edgy side. This look is the epitome of that urban-chic style by incorporating a flowy maroon dress with long layered necklaces, but then topping it with a rocker-inspired leather jacket. The result is dark and rebellious but also sweet — just like Aria!

Hanna’s style on the show is undeniably the most flirty and girly. The aspiring fashion designer loves all things glamorous, but definitely has a trendy edge to her style that keeps her from looking overbearingly feminine. This look definitely rings true to her style with the trendy, high-waisted shorts and simple black tee. Rather than wearing a black leather jacket like Aria, Hanna opts for a softer version with a suede grey jacket in a moto cut. She tops the look off with bedazzlement around her neck to achieve the effortlessly luxe style she is known her!

For much of the Pretty Little Liars series, the girls were taunted by “A,” whom they assumed was their passed friend Alison DiLaurentis. As time passed they soon began to realize that the story behind their friend’s disappearance may not be accurate and lo and behold Alison DiLaurentis eventually shows up alive and well! Resident mean girl Alison definitely had to make a fashion statement when she shocked the town with her reappearance and this fluorescent pink jacket does exactly that.

Despite how creepy the makeshift prom was that A threw for the liars in the dollhouse, the dresses they were given for the event were undeniably memorable. Hanna’s coral number was very accurate to her glamorous taste and featured a body-hugging silk skirt alongside a plunging neckline and fully embellished bodice. Emily’s teal velvet number definitely proved that her style had evolved by the time the fifth season rolled around and the high-slit detailing and luxurious texture looked absolutely stunning on her.

The yellow cocktail dress that Hanna wore during season 3 was a clear fashion win for Pretty Little Liars. The dress was flirty and feminine with it’s tulle skirt and short hemline, but rather than a stereotypical girly color like pink, Hanna opted for an unconventional shade of yellow. The dress featured a waist-cinching chunky belt that created an hourglass shape and she topped the look off with a killer pair of nude boot-style stilettos. Hanna definitely turned heads this evening in Rosewood with this glamorous party look!

Once again, Aria stepped out in a bold style statement that featured diverse mixed prints we’d never initially think to pair together! Season 5 marked a time when Aria still had her soft, mid-length waves which acted as a nice contrast to the eye-catching outfit. She rocked a vertical striped top that combined magenta and black alongside an abstract-style skirt with a slit gliding up her thigh. Although these pieces seemingly wouldn’t go together, on Aria they look fabulous which proves sometimes it can be a huge win to take a risk with fashion!

Hanna is a pro when it comes to fashion and although her style is definitely attention-grabbing, she knows how to style bold pieces in a subtle and understated way. These abstract printed pants from season 5 are a prime example of this. Hanna rocks a violet colored top to match with the blue-tones of the pants and tops the look off with a muted leather jacket and light gray booties. The look flows together flawlessly and all the pieces work together in unison to create one streamlined ensemble that makes a statement.

Based on the look on the student’s faces in the back, this particular Alison DiLaurentis look was a definite head-turner! This episode from the fifth season marked Alison’s first return to school and her stylish outfit selection definitely made her appear with a bang on her first day back. The look featured an abstract printed dress alongside a cobalt and embellished cardigan. She topped the look off with a Barbie pink bag and let her hair fall in soft curls around her shoulders flawlessly.

Of all the liar’s  most memorable looks, their funeral attire was definitely the most remarkable! Whether their looks were appropriate or not for a funeral is a whole other debate, but we love how the liars styled their all black ensembles to perfection. Throughout the series it seems the liars attended a funeral at least once per season and this funeral moment from season one definitely rings true to all the girl’s sense of style. Hanna is in a chic and sheer gown whereas Emily is rocking a sporty V-neck and sharp print. Aria is wearing a red belt, statement jewelry and a corset-inspired top, whereas Spencer looks smart and tailored in a power suit.