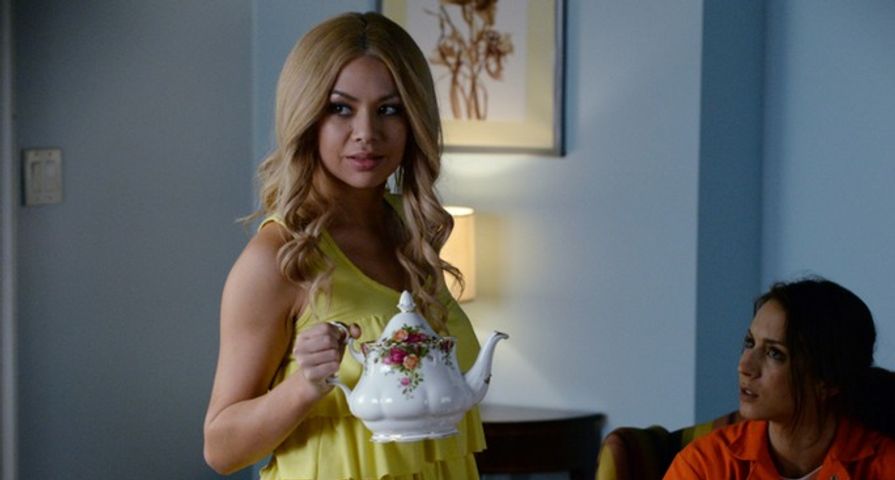 Pretty Little Liars was a far-fetched show from the get-go, but we love it and it’s proved to be entertaining for seven seasons. But fans were really disappointed after the big reveal of ‘A.’ It left some of us scratching our heads in confusion because it didn’t quite add up. It’s not the first ridiculous storyline to make it into the PLL series — the entire show was full of crazy plot twists and unsolved or unexplained murders like Mrs. DiLaurentis. Some characters have even vanished from the entire story, like Mrs. Grunwald, the psychic sorority mother who saved Ali from her shallow grave. The bizarre storylines definitely made the show interesting, but didn’t really make a lot of sense at the time. Here are 7 of the worst storylines from Pretty Little Liars:

Spencer is wary of Jason and suspects him of being involved in Alison’s murder. Naturally, she breaks into his shed with Emily and discovers a dark room for developing photos. The bizarre twist is that all the photos are closeups of Aria’s face that were taken while she was sleeping. After breaking and entering, the two leave their flashlight behind. Jason finds it and immediately clears out the shed along with any trace of the photos. When questioned about the photos Jason denies that he took them. He claims the photos were taken by Alison and that he simply found them in the house and decided to develop them. But why did Ali take these weird pictures? He also said he wanted to frame one of the photos to give to Aria, and that he cleared out the shed after finding the flashlight because the equipment was expensive and he didn’t want to risk it getting stolen. It’s all really creepy on Jason’s part and what’s even worse is that the whole situation, mainly his creepy behavior, is forgotten afterwards.

Spencer’s previously unmentioned Adderall addiction returns in season 4. Viewers find out that during the summer Alison went missing, Spencer was hooked on study drugs. The plot twists again when Spencer realizes that she doesn’t remember much from that night. Memories slowly resurface over time and she is informed that she had been in an argument with Alison the night she disappeared (this was all covered up by her family). Spencer eventually begins to question whether she was involved in the disappearance of Alison. It seems hard to believe that Spencer would even begin to consider whether she had any part in Alison’s disappearance…how does someone forget if they committed murder? How much Adderall do you have to take to become so drug-induced you black out? The idea of introducing a drug problem was the usual antics of a drama series, but the rest of it just didn’t seem to add up.

The PLL ladies and Caleb run off to a little town called Ravenswood in search for more clues about what happened to Alison before she died/disappeared. Caleb meets this woman named Miranda who apparently shares a past with him. He finds out there are murderous spirits hunting him and, in order to keep Hanna safe, he breaks up with her. What’s worse is that she’s just totally cool about it and lets him stay in Ravenswood with this other woman with next to no explanation. When Caleb comes back, we learn that he spent his entire time evading spirits, trying to bring dead Miranda back to life and learning about the curse his family was put under in the early 1900s, known as The Pact. Sorry, what? Then Hanna takes him back and the two return to a couple status. To be fair, this whole plot was intended to lead into a spinoff series called Ravenswood, but it failed after one season and the whole supernatural thing didn’t really mesh well with the the ongoing PLL series.

Meredith made a few appearances throughout the series, first as Bryon’s (Aria’s father) mistress, then as his student and later as Aria’s teacher at Rosewood. During the episode, “Misery Loves Company,” Meredith is taking care of sick Aria, which is bizarre in itself because Aria hates Meredith. She seems nice enough until we learn that she’s been slipping drugs into Aria’s tea. Then Alison appears to Aria in a drug-induced dream and Aria realizes what has happened — that Meredith has locked her inside her bedroom. Aria tries to escape, but Meredith knocks her unconscious and then locks her up in the basement. When Hanna and Emily come to the rescue, Meredith locks them up as well. Somehow three against one doesn’t work. Finally Bryon comes home and Meredith flees town. We never really hear about Meredith again and for some odd reason this whole event is just another day in Rosewood.

In season 5 the girls are all prisoners being transported to jail after being charged with the murder of Mona. On route to jail, ‘A’ hijacks the van (all on her own I might add), kidnaps the girls and takes them to her own underground prison. When the girls wake up, they are all being held in separate rooms that are exact replicas of their bedrooms at home. Totally creepy! The underground prison is quite hi-tech with a built in alarm system, tunneled hallways, video surveillance and an audio speaker system. It seems a bit weird that ‘A’ has been able to flawlessly pull off this kidnapping and build an entire underground prison all by herself. How is she always able to accomplish these elaborate tasks? This is more than the generic blackmailing that the show started off with. We also find out that Mona is still alive and well, she’s just been holed up in A’s prison and forced to dress like Alison. The girls are directed like puppets in this ‘doll house,’ but we aren’t really quite sure where it’s all going. And why isn’t the real Alison kidnapped? This whole storyline was a stretch in terms of absurdity, even for this show.

This is the absolute worst one ever. The writer’s trick viewers into thinking that ‘A’ is Ezra, but it’s then revealed that he’s a true crime novelist who has been stalking the girls for years to write a novel on Alison’s disappearance. But first, let’s rewind and refresh on who Ezra was before all of this…he was high school teacher who got romantically involved with Aria, which is gross because she was 16 and he was 22. Despite this, viewers loved them together because their story seemed somewhat endearing. What novelist goes to such extreme lengths as to hiding in underground bunkers with high-tech surveillance equipment to monitor the girls every move? This all would have made sense if he was ‘A,’ but to go through all of this for a book seems a bit weird. Once Aria finds out, she’s betrayed, but they manage to make amends. She also throws his entire book (of which he only has one copy) off a ski lift and he didn’t really seem too hot and bothered about it. He moves on and buys a coffee shop and stays on the show. The whole thing was just too weird and none of it seems to make sense.

Fans were pretty outraged when it was revealed during the season 6 finale that CeCe Drake was in fact ‘A’ aka Charles aka Charlotte. It turns out that ‘A’ is Alison’s sibling and has a vendetta against her family because of how she was treated as child. She was born as Alison’s older brother, but was deemed crazy and was committed to Radley with ‘in and out’ privileges, which explains the psychotic behavior over the past six seasons. But there’s a lot of plot holes in this storyline — it’s almost impossible to uncover them all. The whole ‘A’ plot became a transgender story as Charles transitioned into a woman named Charlotte, who then changed her name to CeCe Drake. It’s so complicated it almost seems as though the whole thing was pulled from thin air. When CeCe first came onto the show she was one of Jason’s exes which would mean she dated her brother. Then, when she would visit Mona in Radley, she used a visitors pass, but how did she get a visitor’s pass to Radley if she was committed there? And at the beginning of the series, CeCe had a college roommate. It is explained that CeCe was allowed out of Radley to attend UPenn, but how did she get a roommate if she was living at Radley while taking classes? And where is she getting all this money? We could comb through the entire series and find more plot holes, but to sum it up, the whole ‘A’ reveal was a huge letdown.