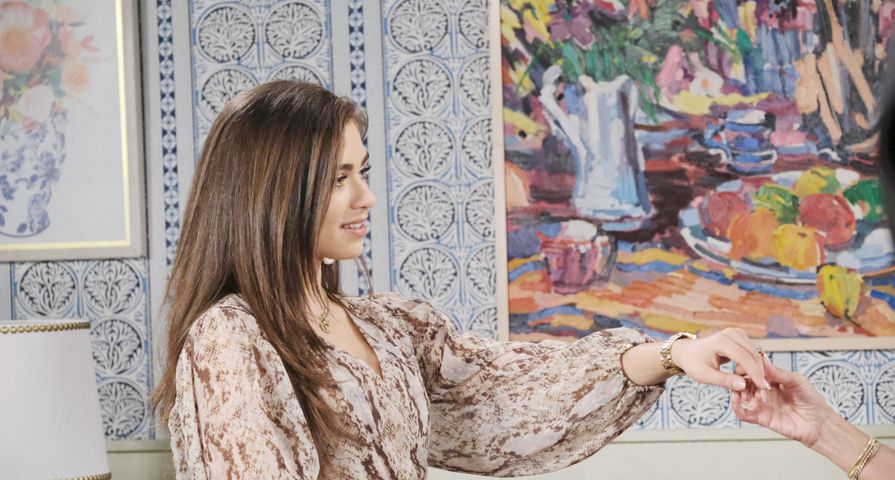 It was a dramatic week on The Young and the Restless, Days of Our Lives, General Hospital and The Bold and the Beautiful! Find out what you missed with your spoilers recap for May 11 to May 15, 2020:

There were a few spoilers for GH fans on Monday. Michael prepared for court; Willow contemplated her future; and Nelle asked for a favor.

There were a few spoilers on Monday for GH fans. Molly was annoyed; Brando blamed Sam; and Julian grew angry with Neil.

Monday’s episode of B&B originally aired on October 29, 2020. Taking place in the magical setting of Villa d’Este on Lake Como, Eric (original cast member John McCook) and Stephanie (Susan Flannery) worried that the delayed Forrester Spring Collection would be their last, and Brooke (original cast member Katherine Kelly Lang) attempted to calm a distraught Ridge (then played by Ronn Moss). Also, Sally (Darlene Conley) and Lauren (Tracey Bregman) caused a scene in order to crash the runway show, hoping to witness the demise of their rivals.

Tuesday on Y&R, Victor’s (Braeden) foes were rocked by his shocking return to Genoa City. The episode originally aired October 1, 1993

Ciara accepted Ben’s proposal on Tuesday’s episode of DOOL while Sonny and Will reflected on the anniversary of Adrienne’s demise. Also, Brady made a difficult decision, and Sarah and Kristen came face-to-face.

There will be a few new developments for GH fans on Tuesday. Lucy received an important phone call; Carly admired Willow; and Michael surrounded himself with family.

Tuesday’s episode of B&B originally aired on April 27, 2012. As Aspen Fashion Week got underway, Hope (then played by Kim Matula) said goodbye to Liam (Scott Clifton) as paparazzi swarmed her with questions and called her a fraud. Unaware that his father’s plan to attack Hope was in progress, Liam and Steffy (Jacqueline MacInnes Wood) talked about the memories they shared together in the beautiful mountainside town.

Wednesday on Y&R, Nikki declared war against Sharon at the Newman Ranch, and Phyllis and Nick dealt with a tragedy. The episode originally aired on June 15, 2012.

Abigail attacked Kate on Wednesday’s episode of DOOL while Gabi sought answers from Rolf about Stefan. Also, Ciara told Hope about her engagement to Ben, and Ben questioned Jake about the goons who came by the garage.

There were a few spoilers for Wednesday’s episode. Sonny was in agony; Olivia was upset; and Michael received plenty of support.

Wednesday’s episode of B&B originally aired on November 11, 2016. As Quinn (Rena Sofer) attempted to take the lead in final preparations for her fashion show, not everyone at Forrester Creations was on board. Wyatt and Ivy (Ashleigh Brewer) encouraged Quinn to move forward with her original plan for the show-stopper in spite of ruffling the feathers of Eric’s family. When Katie paid another visit to Eric’s home to thank him for his favor, he invited her to stay and watch the fashion show with him. As a sign of protest against Quinn, Ridge decided to sabotage her presentation.

Thursday on Y&R, Victor took on Jack and Brad (Don Diamont) to regain control of Newman Enterprises while Ashley was caught in the crossfire of the Newman and Abbott rivalry. Also, Christine (Lauralee Bell) and Paul (Doug Davidson) prepared for parenthood. The episode originally aired on June 21, 1999.

Evan and his family arrived in court for his verdict on Thursday’s episode of DOOL, and Zoey had a new look starting today since Alyshia Ochse’s in as Zoey and Kelly Thiebaud’s out. Also, Jake rejected Gabi’s attempts to help him with his memory while Chad, Jack, and Jennifer rallied around Abigail.

There were a few spoilers for GH fans on Thursday. Diane prepared Michael; Carly confronted Chase; and Nelle made a grand entrance.

B&B’s Thursday episode originally aired March 21, 2017. Before walking down the aisle to become Mrs. Liam Spencer, Steffy participated in a Forrester Creations photoshoot with her cousin Ivy in front of Australia’s magnificent Sydney Opera House. In spite of how difficult it was to see Brooke with Ridge at the ceremony, Bill assisted his son Liam with some last-minute wedding preparations.

Friday on Y&R, Lily gave Hilary a rude awakening, and Sharon struggled with Mariah’s presence in Genoa City. Also, Nikki and Paul were reminded of their past with Ian Ward (Ray Wise). The episode originally aired on May 22, 2014.

Orpheus delivered horrifying news to Marlena on Friday’s episode of DOOL, and Maggie and Sarah had an emotional heart-to-heart. Also in that episode, Zoey revealed Evan’s secret to Rafe, and Eric was furious with Brady when he learned what he’d done.

Friday’s episode of GH was a flashback of the show’s 55th Anniversary episode from March 30, 2018.

Friday’s episode was from April 14, 2017. Stolen designs were in play as the Spectra fashion show was about to begin. Sally felt pangs of guilt for betraying both Coco (Courtney Grosbeck) and Thomas (Pierson Fodé), while CJ (Mick Cain) arrived and reminded Sally about their deal regarding the sale of the building – if the show didn’t go well, he would be forced to sell. Bill was less than pleased with the idea when Wyatt played devil’s advocate, stating that the Spectra show could be a success.