Home » Entertainment » Celebrities » Cast Of Brooklyn Nine-Nine: How Much Are They Worth?

Cast Of Brooklyn Nine-Nine: How Much Are They Worth? 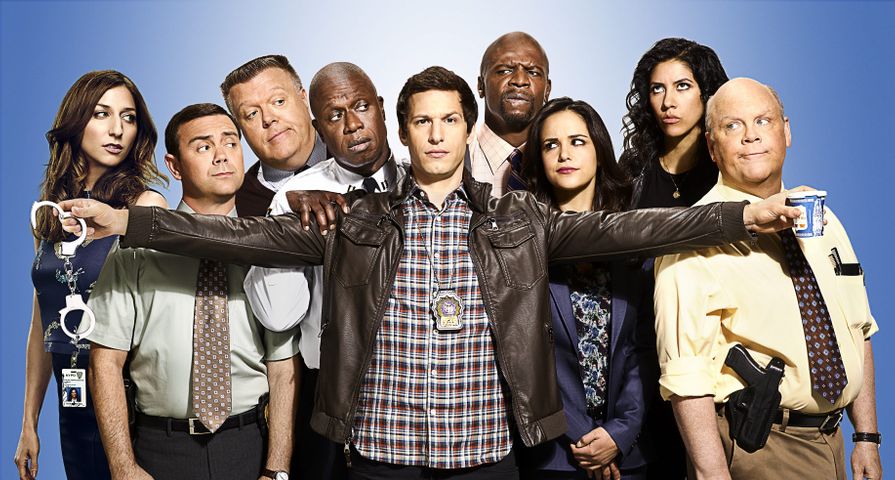 Fox’s Brooklyn Nine-Nine has garnered critical acclaim, two Primetime Emmy Awards, and two Golden Globe Awards, not to mention a huge fanbase and it is only in its third season. With a cast led by Andy Samberg it is definitely one of the freshest and most unique comedies on TV, with each character bringing their own dimension of humor and each actor absolutely owning their role. With an ensemble cast of new faces as well as experienced actors and comedians, the producers and show creators really hit the mark when casting and with the show doing so well it is safe to say the stars are enjoying the benefits to their paycheque. While we love Scully and Hitchcock, unfortunately, not a lot of information was available about their salaries, but check out how much the rest of the cast of Brooklyn Nine-Nine are worth!

Estimated Net Worth: $500 Thousand. Comedienne Chelsea Peretti got her start as a stand-up comedian and then made her first TV appearance in 2004 on Comedy Lab. She continued acting before landing a recurring role on The Kroll Show on Comedy Central as well as a role in China, IL before getting the part of the hilarious administrative assistant Gina Linetti on Brooklyn Nine-Nine. Although she is making a bigger and bigger name for herself and establishing herself as one of the top female comedians, Chelsea Peretti still only has an estimated net worth of $500 thousand.

Estimated Net Worth: $2 Million. Joe Lo Truglio is perhaps one of the most underrated comedic actors in Hollywood and with 86 acting credits to his name, he has made his way into many projects. He has appeared in many films and shows including Wet Hot American Summer, Hitch, Beer League, Pineapple Express, Role Models, Fanboys and reprised his role as Neil for the Netflix mini-series Wet Hot American Summer: First Day of Camp. Now, he is enjoying a starring role as Charles Boyle on Brooklyn Nine-Nine and it seems all of those roles have definitely paid off as he is now worth a very respectable $2 million.

Estimated Net Worth: $2 Million. Melissa Fumero began with an interest in dancing before earning a bachelor’s degree in drama and starred in One Life to Live as Adriana Kramer from 1998-2011. She also had a role in All My Children and continued acting before landing a recurring role in Gossip Girl as Zoe. She only has 16 acting credits to her name, but thanks to her soap opera salary, as well as the starring role of Amy Santiago on Brooklyn Nine-Nine, Fumero has earned herself a cool $2 million.

Estimated Net Worth: $20 Million. Terry Crews was destined to be a money maker. He was drafted by the NFL in 1991 and, after bouncing around a few teams, he called it quits on a football career in 1997. Amazingly he went on to have an even bigger, better and more lucrative career in acting, resulting in an impressive net worth of $20 million. Crews has been in Training Day, Friday After Next, White Chicks, The Longest Yard, Norbit, Get Smart, Everybody Hates Chris, Gamer and The Expendables, just to name a very few out of his impressive resume. Proving he is the best at both action and comedy, Crews is now pulling a sizable paycheque as Terry Jeffords on Brooklyn Nine-Nine, not to mention he is also one of the faces from the famous Old Spice commercials.

Estimated Net Worth: $1 Million. Stephanie Beatriz absolutely nails the role of Rosa Diaz on Brooklyn Nine-Nine, which is made even more impressive by the fact she doesn’t have a ton of acting experience. Beatriz had a few stage appearances at highly respected theatres and landed her first TV gig in 2009 on an episode of The Closer. She went on to appear in Southland, Jessie and Modern Family and has also appeared in the film Short Term 12. She has chosen her roles wisely, however, and is now worth an estimated $1 million.

Estimated Net Worth: $8 Million. Andre Braugher is a critically loved and well respected actor who has enjoyed several roles throughout movies and television. Braugher attended Juilliard School’s Drama Division and, when he graduated, he received the honor of Most Outstanding Theatre Student. He began acting in 1989 and got his first big role in 1993 as Frank Pembleton on Homicide: Life on the Street and has also appeared in Gideon’s Crossing, Hack, Passengers, Salt, House M.D. and Law & Order: SVU. Right now of course he is known as Captain Ray Holt on Brooklyn Nine-Nine, a gig that is adding nicely to his estimated net worth of $8 million, as he is making a reported $100,000 per episode.

Estimated Net Worth: $16 Million. Andy Samberg is really good at comedy, and when he wasn’t acting in the past, he was making money by writing jokes for major awards shows and late night shows like the MTV Music Awards and Saturday Night Live. He has been in many films and shows including Hot Rod, I Love You, Man, Saturday Night Live, Friends With Benefits and has lent his voice to animated projects including Hotel Transylvania. He has been a recurring host of the Emmys and has even won an Emmy as a member of The Lonely Island. Now he is leading the stars of Brooklyn Nine-Nine as Jake Peralta making a reported $125,000 per episode. All together, his many works and projects have earned Samberg an estimated net worth of $16 million.