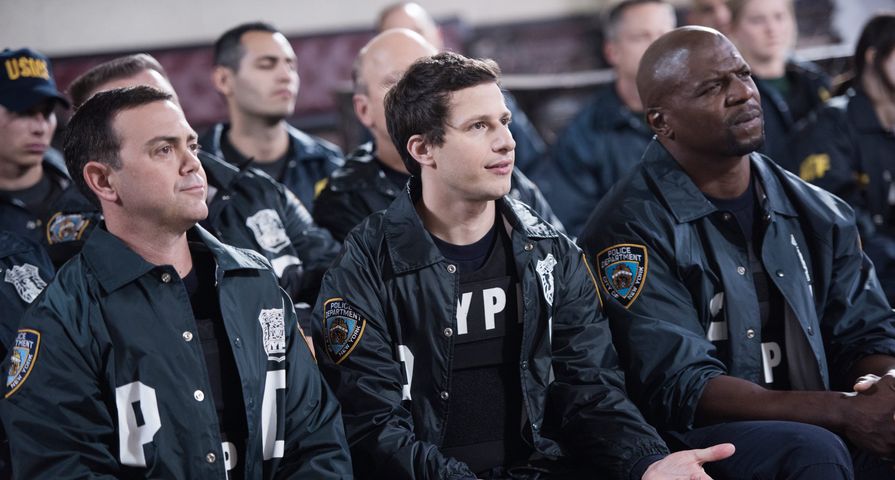 Fox’s hit comedy series Brooklyn Nine-Nine begins when a new Chief of Police, Captain Ray Holt (Andre Braugher), takes over the precinct. However, Detective Jake Peralta (Andy Samberg) is used to taking down crime his way, while fellow Detective Amy Santiago (Melissa Fumero) is desperate to be teacher’s pet. Add to the cast Stephanie Beatriz, Terry Crews, Joe Lo Truglio, and Chelsea Peretti, and you have a police comedy that is hilariously witty and shockingly bold. Since the fourth season is about to return, here are 15 things you didn’t know about Brooklyn Nine-Nine.

To make the show as realistic as possible, the actors of Brooklyn Nine-Nine underwent police and guns training.

Chelsea Peretti originally wanted to be Detective Rosa Diaz and auditioned for the part. When the role was given to Stephanie Beatriz, the character Gina Linetti was made for Peretti.

Brooklyn Nine-Nine is not the first time Joel McKinnon Miller (Scully) and Terry Crews (Terry Jeffords) have worked together at a police station. They were both featured in Friday After Next (2002) where Miller portrayed a police officer while Crews played a criminal who was recently released from prison.

Off-screen, Stephanie Beatriz (Rosa Diaz) is part of a dance squad that cheers on a women’s basketball team called The Pistol Shrimps. The team’s players are actresses and include Aubrey Plaza.

While filming Brooklyn Nine-Nine, the actors are encouraged to improvise to make the scenes more comical. This technique was also used on Parks and Recreation, which had the same creator, Michael Schur. During auditions, the actors were asked to improve with Andy Samberg.

Before becoming an actor, Terry Crews (Terry Jeffords) played in the NFL for six years. He played for the San Diego Chargers, Washington Redskins, L.A. Rams, and Philadelphia Eagles. He retired from his professional football career in 1997 and became a series regular on Battle Dome.

In addition to playing Detective Jake Peralta, Andy Sandberg is also a Grammy winner. He won the award for his group, Lonely Island’s hit song “I’m On a Boat,” which featured T-Pain.

Actress Stephanie Beatriz (Rosa Diaz) was born in Neuquen, Argentina, and immigrated to Texas when she was three-years-old.  It is not commonly known that she is also near sighted and off-camera wears thick glasses. She is legally blind while filming and often can’t see where she is supposed to stand.

Terry Crew’s first job was working as a sketch artist for a small news station. He got the position when the actual artist was sick. This real life experience was incorporated into the show when Terry Jeffords (Crews) had to fill in for a sketch artist.

Dirk Blocker (Hitchcock) comes from an acting family. His dad Dan Blocker was in Bonanza (1959) and Zorro (1958) the TV series. His brother David Blocker is a movie producer, and produced Into the Wild (2007) and Hannah Montana: The Movie (2009). Furthermore, his wife and sisters-in-law are also actresses.

Andre Braugher (Captain Ray Holt) was originally a pre-med student at Stanford University, but switched his major to drama, and earned a Master of Fine Arts degree at Julliard in 1988. In addition to playing a no-nonsense cop, he is also a Shakespearean actor and received an Obie for his role on Henry V in 1996.

Before he was Jake Peralta, Andy Samberg was a production assistant for the sitcom Spin City (1996). The show was filmed on the same lot as Brooklyn Nine-Nine, but now Samberg has his very own parking spot.

While casting the show, Stephanie Beatriz (Rosa Diaz) and Melissa Fumero (Amy Santiago) were very nervous over whether the network would sign on two Latinas for Brooklyn Nine-Nine. Luckily they did, because these two cops make a hilarious team.