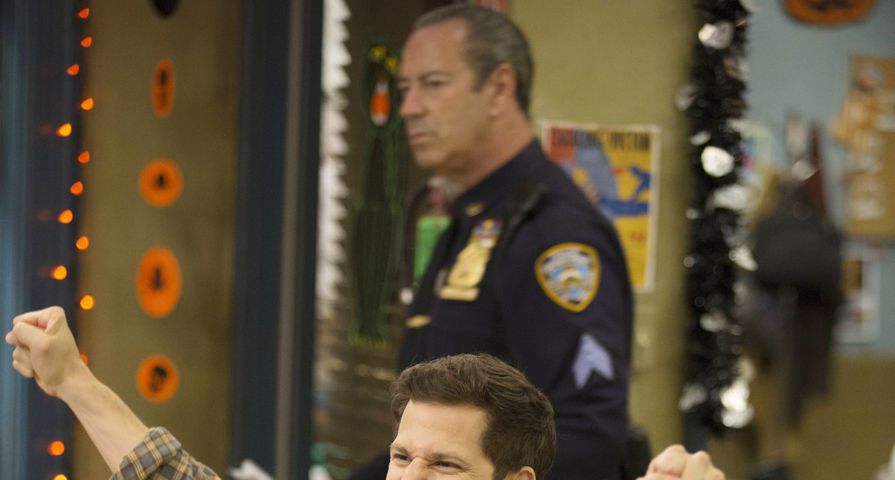 To say that Brooklyn Nine-Nine is a funny show is vastly understating the fact. With every cast member being absolutely hilarious on their own and with practically every line of the show being gut-bustingly funny, it’s one of the best comedies gifted to television audiences in years. Every time you think you’ve picked your favorite funny character (Boyle, Santiago, or maybe Diaz?) another one of the Nine-Nine gang (Hitchcock, Scully, even straight-faced Captain Holt) makes a joke and the top spot is up for grabs again (Terry, Jake, it’s gotta be Gina!). Although a hefty chunk of every episodes’ script could be included, here are 12 of the best quotes from Brooklyn Nine-Nine.

It’s hard to imagine anyone thinking of Terry Jeffords (played by the massive Terry Crews) as tiny, but that’s how his brother-in-law Zeke sees him. Zeke, who is in real life former football player Jamal Duff, towers over everyone around him at 6’7” and 285 lbs. Zeke also likes to mock his “little” brother-in-law whenever he’s in town, grabbing a pickle jar to help his mini friend open it and quipping, “Tiny Terry loooves his pickles.” If you say it yourself, be sure to imitate Zeke’s super low voice and super mocking tone to get it just right. But remember, Terry doesn’t “even really like pickles.”

When personal and professional lives get mixed up together, things can get awkward. In the Nine-Nine’s case, it can get brain-meltingly nasty. When Boyle fails to invite Rosa to his wedding thinking it might be weird since he used to be hopelessly in love with her, she takes offence since they’re now friends and she’s the only one who didn’t get an invite. The fact that Rosa found this out on the same day that the team headed off for Tactical Village was just Boyle’s bad luck. Testing out the new weapons at the detective’s disposal, Boyle is Rosa’s unfortunate victim again and again. Paint balls to the breasts, giant netting and, of course, the sonic weapon that is so silent yet piercing it makes Boyle scream, “I can taste my thoughts!”

When Boyle isn’t being attacked with various new weaponry, he’s busy being in love. When his crush on Rosa goes unrequited, he’s thrilled to meet a new lady, older woman and fellow foodie Vivian Ludley. But Jake worries that his best friend will go “full Boyle.” What’s full Boyle. Well, the sweet but overly enthusiastic Charles apparently has a record of taking things way too far way too fast with his relationships. Taking an unplanned trip, meeting each other’s parents, getting engaged? It’s all possible as soon as possible when Charles is going full Boyle.

9. It Was Inspired By The City of New York…

Gina’s dance troupe Floorgasm certainly has the mad movement skills and with Linetti at the helm of their kicka-s choreography, they certainly have the snazzy steps and graceful grooves. She may not be able to come up with them herself, but that’s not a problem. After showing Holt one of the group’s sweet routines (ya know, to help him win an organization’s election … because a dance routine would totally help, no doubt), she freely admits, “It was inspired by the city of New York… in that I stole it form some kids I saw dancing in a subway station.”

Grackles aren’t the most beloved birds around. Frankly, their piercing call is enough to make a person shiver. They certainly don’t have the lovely call of the nightingale or other songbirds. And, honestly, the name grackle is pretty rough. So, after Gina and Terry use a bird-lovers knowledge to distract him and he gives Gina a grackle lesson, it becomes her insult of choice. When Captain Holt’s nemesis, Madeline Wunch, stops by with another attempt to try to take Holt down and demands to know who was behind the scheme, Gina is ready with a biting and hilariously timed “Gina and Terry got it, you grackle!”

When cops need to fill out a line up, they sometimes add extra bodies by including random people and volunteers. Boyle does just this while trying to pinpoint a criminal and asks if Terry has time to help him out and join the lineup. But not as regular Terry because regular Terry is far too nice. Boyle wants “Scary Terry” to join the lineup. Terry is happy to help. “I love being Scary Terry! He says what Regular Terry is thinking. ‘THIS IS TAKING TOO LONG! I’M GOING TO MISS THE FARMER’S MARKET!’” Granted, he does sort of scream it, but that’s apparently as scary as Terry gets.

Gina Linetti likes to open her Christmas presents before the big day so that she can “nail those Christmas morning candids.” Displaying her talents to Charles when their parents start dating and intend to exchange holiday gifts, Gina shows Charles how she can fake the perfect present response. Her practiced “candid” reactions include her signature “bewonderment,” “disbe-loving it,” and the favorite, “sparkle surprise”, each which comes with an enthusiastic and fully practiced “candid” facial expression that will dazzle the Christmas morning cameras.

When the nasty Scully and Hitchcock threaten Boyle and force him to disclose the location of a secret department bathroom, Gina must come to the rescue and find a way to make sure that the two older detectives never set foot in the “special place” ever again. Her negotiation skills are fierce and brutal but in the end she sacrifices what she must. That is, her precious wolf blanket, “Wolfie.” But she assures Charles and Rosa that she’s moved on. “Plus, I’m done with wolves. I’m into angry unicorns now..” But really, Charles has the reasonable response. “If I was a unicorn, I’d never be angry.”

4. Gina’s Authentic Stolen Police Badges, How May I Help You?

Gina takes full advantage of working at a police department. Maybe too much advantage. While visiting the local gun range with Captain Holt and Sergeant Jeffords, Gina answers her cell phone with the name of a side business she’s apparently running. “Gina’s authentic stolen police badges. How may I help you?” it earns a questioning look from Holt as one can surely understand. But the real question is, how much would she charge for one of those things?

Jake Peralta likes to have fun at fellow detective Amy Santiago’s expense. One of his favorite ways to do that is to add, “title of your sex tape” whenever it suits and comes out with hilarious results. Brooklyn Nine-Nine’s version of “that’s what she said” it still hasn’t lost its grin-inducing appeal. Hopefully you can’t relate to titles like, “Kind, Sober, and Fully Dressed,” “It’s Not Your Fault. I Was Terrible,” “I’m Sorry About Tonight,” “I’m Not Going to Touch That,” “I’m Horrible at This. When Can We Stop?” and “I Hope it Doesn’t Get Too Sexual,” “What is Taking so Long?” “Why Doesn’t Your Mouth Work,” and the potential classics “A Blast of Cold Air Coming Out of That Box” and “Better Not Bite Me in the Ass.”

Charles Boyle is dedicated cop and an enthusiastic fellow and he certainly doesn’t try to reign in that excitement at all. Jake’s best friend and detective partner, he’s never one to steal anyone else’s thunder, but he doesn’t shy away from expressing his wholehearted enjoyment of his own accomplishments. Earning himself a signature phrase whenever he kicks a little Brooklyn Nine-Nine butt, Boyle says one thing every time. Boyle says BOOM!

Terry may not like pickles, but you know what he does like? Yogurt. He really likes it. Like, he loves it. When your someone who needs to eat 10,000 calories a day to maintain muscle mass (which Terry certainly does), then you need to eat a heck of a lot of food. So it’s a good thing that Terry loves food and it’s a good thing that loves yogurt. It’s even the password on his computer. If that’s not love, then what is?!