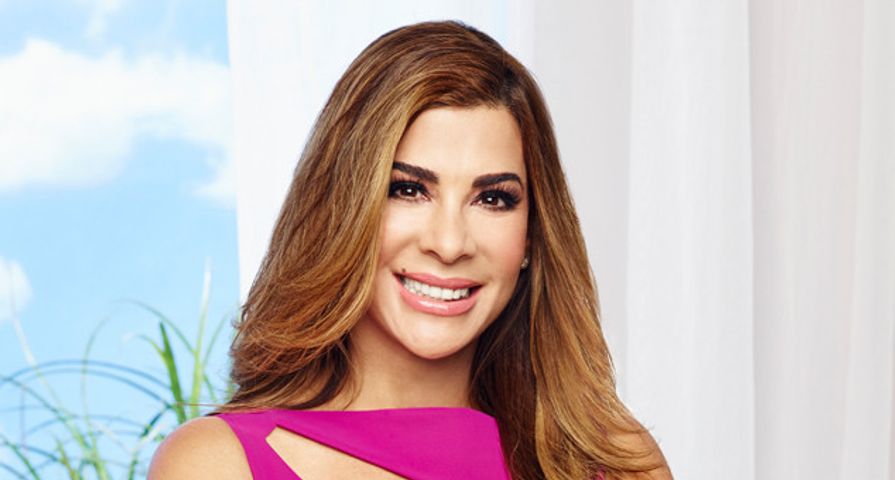 Siggy Flicker is sure to spice up the new cast this season on The Real Housewives of New Jersey. The show is early into season 7 and viewers are still learning about the two new women who’ve joined the cast. One of the newest cast members this season is relationship expert, Siggy Flicker! We are still feeling out what the dynamic will be between them all since Siggy’s connection to the group is through Jacqueline while Dolores is a both a friend of Jacqueline and Teresa. She’s already proved to be extremely warm and friendly and a total diva, but in a good way! She definitely paints herself as someone every girl wants to be friends with. Siggy is excited to be apart of he show and has even started her own hashtag, #TheSig! But before we get too deep into the season, here’s a look at 8 things you probably didn’t know about Siggy Flicker:

Siggy might be a newcomer to the show RHNOJ, but she’s a veteran television personality who has appeared on multiple networks over the span of her career. Siggy is a successful relationship expert and matchmaker. She is sought out for her advice and counsel and has even appeared on shows like TODAY, Good Morning America, The Wendy Williams Show and Dr. Phil. Not only does she do appearances on talk shows, but she’s also previously starred on her own reality show. That’s right — she was a reality star before becoming a Real Housewife! In 2011 she starred on the VH1 show, Why Am I Still Single? The show featured two clients who were both having trouble in their dating life. Then comes Siggy to the rescue! In each episode, she puts her clients on a blind test date where she secretly monitors them to assess their issues. At the end of each episode she lays out what their problems are and offers advice on how to improve their dating habits.

Not only is Siggy a television personality, but the reason she’s sought out for her advice is because she’s been a successful matchmaker for the past 20 years! She has successfully created an entire brand around her matchmaking skills and calls it a “potent brew of common sense, compassion, and just plain bull in china shop bluntness.” Her no nonsense attitude is what makes her so successful and allows her to “always hit the mark.” She even penned her own advice column called “Single with Siggy” which was printed in the September 2013 issue of Marie Claire. Hopefully she can pass along some of her good counsel to newly single and fellow New Jersey housewife, Dolores Catania! Her whole career started many years ago when she joined Model Quality Introductions. She worked her way to the top and was eventually Vice-President of the company.

In 2015 she wrote a self-help book called Write Your Own Fairy Tale: The New Rules for Dating, Relationship, and Finding Love On Your Terms. The book is essentially what it sounds like — it offers advice on how to attain the relationship that “you want,” how to navigate dating, and learning how to “make the most of the first five minutes.” One thing is for sure, Siggy knows what she’s doing! The book received fairly decent reviews which is quite impressive! She has also been a guest star on Jersey Shore star Sammi Sweetheart’s podcast Just Sayin’ and in her own words, she’s the go-to for the “realest relationship” advice. According to her website she’s been invited onto radio shows across the country and even provided commentary for huge publications like US Weekly, In Touch and the Huffington Post.

One of the true tests of whether Siggy knows what she’s talking about is the fact that she’s been married, not once but twice! She’s also experienced the single life after marriage. She married her first husband Mark Flicker in 1997. The couple had two children together and divorced in 2007. One her website she describes her divorce as “divorce done right” meaning that “there were no lawyers, no bitter arguments and no traumatized children.” What’s even more shocking about her relationship with her first husband is the fact that they have remained close friends! This almost never happens when a couple gets divorced and is a true test to the fact that Siggy knows not only how to match maker a healthy relationship, but also maintain one! In another odd twist of events, her first husband Mark was the best man to her second husband Michael Campanelia when they got married. She acted as his match maker after the two divorced, and she set him up with his now fiancee and even threw her a baby shower last Fall!

My ex. His fiancé and the most adorable baby boy LIAM!!! #love #everyonedeservestobehappy   A photo posted by Siggy Flicker (@siggy.flicker) on Aug 20, 2015 at 1:59pm PDT

In true fairy tale fashion, Siggy found love again after divorcing her husband of 8 years, Mark Flicker. She met Michael Campanella and in 2012 they got married. Micheal is a successful car dealer who lives in New Jersey. He is worth an estimated $5 million! Their love story is rather interesting. Not only did her ex-husband serve as Michael’s best man at his wedding to Siggy, but she has also revealed that he wasn’t her “type” when they first met. During an interview with the Palm Beach Post, Siggy said, “He sold Jeeps and Chevrolets, and he’d been successful and had lost it all. He doesn’t have any hair on top. But my heart was pounding. We started talking, and he was not afraid to admit his failures. That was sexy to me.” She currently lives in New Jersey with Michael, her two kids, a son and a daughter, as well as Michael’s two children from a previous relationship.

There’s no denying that Siggy Flicker has gone under the knife because, for her first appearance on The Real Housewives of New Jersey, she’s recovering from a recent facelift and is all bandaged up! So, it’s pretty clear she’s not one to shy away from a little bit of tweaking, but just how much has she done? She opened up in an interview with Radar Online and admitted to all the work she’s had done. She said in addition to her face lift, she’s also gotten breast implants. However, those have since been removed. Siggy has also admitted to using Botox in the past, but she’s happy with her decision to take more extreme measures like the face lift: “Women today put injectables, which is great when you need a little bit here, but after a while the more injectables you put in your face, it starts to get heavy…it starts to sag. It’s like a lifestyle lift, they just lift you up and you don’t have to worry about getting injectables anymore!” Siggy isn’t ashamed that she’s had work done, but does admit that she’s not planning anymore major surgeries in the near future. “I believe you live life once and why hide anything? Nobody was born perfect. I like to share with people because if I could help them with anything, why not?” she said.

Siggy Flicker is Jewish — in fact she takes pride in the fact that she’s the first Jewish New Jersey housewife! Her full name is Sigalit which is the Hebrew word for “violet.” Her family roots are out of Israel and she was actually born there in 1967! On the show she revealed that her mother went into labor in a bomb shelter during the Six Day War. When she was 6-years-old she moved to Cherry Hill, New Jersey with her family. They soon settled into their new lives and Siggy now considers herself a real Jersey girl. Even though Siggy is quite financially comfortable now, she didn’t come from a wealthy background. Siggy attended Monmouth University in West Long Beach and paid her way through school by working as a waitress at TGI Friday’s! She graduated with a B.A. in Communications. Unlike some of the other housewives, she’s extremely humble and worked hard at building her career in order to get where she is today. She definitely lives a more luxurious life nowadays.

Not only is Siggy herself a big deal in New Jersey, but so is her father! Siggy’s dad, Mordecai Paldiel, was born in Belgium, but fled to France as a child. He lived in Europe during the second World War and was forced to flee from the Nazi’s. According to the Jewish Foundation for the Righteous, Mordecai escaped them when a Catholic priest took him and and helped him and his family get to Switzerland. Today, he is well recognized as a Holocaust scholar and has been a key note speaker for the United Nations.