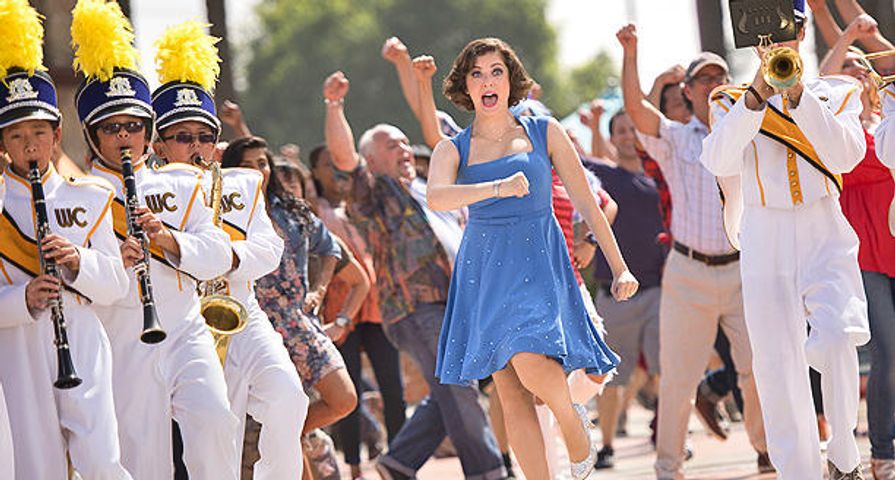 Eddy Chen/Courtesy of the CW

Have you had the opportunity to check out Crazy Ex-Girlfriend? No? Are you a fan of musical comedy? Yes? What are you waiting for? That’s a lot of questions. It’s time for some answers… For those who have yet to check it out, the show airs on The CW–or the C-Dub if you’re really cool–Monday nights. And it features a slightly imbalanced lead character who bails on a high paying legal partnership in New York City to chase a fella in California who she dated for two weeks when she was 16 at summer camp. Yep. You’re sold.

In Crazy Ex-Girlfriend, Rachel Bloom plays the character of Rebecca Bunch, a former Harvard law student who has made exceptionally good in the real world. She’s so convincing as a former Harvard student, one might believe she actually went there for… something. And she comfortably pokes enough fun at the Ivy League university to believe it’s an homage. It’s not. To set the record perfectly straight, Rachel–the creator, writer and star of this show–went to the prestigious NYU Tisch School of The Arts, which in some ways is the Harvard in the world of performance arts. She studied theater while at university, and also did a lot of sketch writing, which has been parlayed into this bold wonder we now behold: Crazy Ex-Girlfriend.

6. Marc Webb Is Producing and Directed The Pilot

Here’s something few people probably realize. Marc Webb is on Crazy Ex-Girlfriend as an executive producer, and he directed the pilot. Marc is none other than the director of 500 Days of Summer, the love sick indie featuring Joseph Gordon-Levitt and Zooey Deschanel, as well as the most recent forays into the life of Mr. Peter Parker. Yep. Marc directed The Amazing Spider-Man and its sequel. For those who presently know Marc as the executive producer on the TV spinoff of Limitless–the film starred Bradley Cooper–it seems you don’t know jack about Marc. This guy is apparently into musical comedy. (OK. We didn’t know that either. That’s why we’re saying it now.) In the world of feature films, Marc is presently directing Gifted, starring Chris Evans, Jenny Slate and Octavia Spencer, slated for 2016 release.

5. West Covina Is Closer To The Beach Than Advertised

To offer balance and fairness to the fine people of West Covina, California, they are much closer to the beach than is suggested in the show. Yes, Rachel Bloom is fully aware of this, and yes, it is written for the sake of comedy. According to the show, they’re two hours from the beach–four in traffic. In reality, West Covina is less than an hour from beaches in Orange County. It is something people from Southern California make fun of on the regular. Rachel actually grew up in a SoCal beach town, thus, there’s some poking fun at the myriad of subcultures that have developed in Greater Los Angeles. Covina and West Covina (the town motto is seriously “Live, Work, Play”) are cool little towns located in the San Gabriel Valley, boasting a must-see destination for all Los Angeles visitors: Bert’s Mega Mall.

4. It’s As Charming as It Is Absurd

This show has some serious charm. It’s boasting some really great comedy, and razor sharp wit. Setting any fanatic bias aside, Crazy Ex-Girlfriend still seems to be working to its rhythm. It looks great–there’s no denying the quality of production; however, the premise is so far out there, it’s reliant on absurdity to keep the boat afloat. At this point, there’s a decent balance of saccharine reality to keep the show quite engaging for 39 of the 43 minutes. Still… it grows on you. We’re talking musical comedy here, folks. Each episode pumps out a couple full-fledged productions. You’ve got to come to the table with some suspension of disbelief. That stated, these musical numbers are born in the imagination of the heroine…they don’t “actually happen,” as is the case in many musicals.

…and it seems she’s totally cool. Gabrielle plays Valencia Perez. She’s the yoga instructing current girlfriend of Josh Chan, the object of Rebecca’s affection. Rebecca = Crazy ex-girlfriend and Valencia = Current girlfriend who might have a seriously bad temper… we’ll see. What we’ve seen thus far: Valencia is so good at yoga, and her rivalry with Rebecca has become palpable. About the real Gabrielle: this girl is smokin’ hot in the show, but who is she? A relative newcomer to the world of television, it seems she was another one of those musical phenoms who was dancing and singing on the boards of Broadway by her early 20s. In real life, Gabrielle is also very engaged with her fan base, and does a lot of work in education, offering master classes to young performers. We can get down with that. We think Gabrielle will be a regular fixture on screens in the future.

2. Originally Picked Up By Showtime

Here’s a relatively unknown tidbit about the show. If you’re familiar with Rachel Bloom’s comedy, she has a tendency to be a little blue. Brass tacks: she’s crass. She’s got a bit of a potty mouth. Crazy Ex-Girlfriend was originally intended for Showtime, where the show would have been far more “adult” in theme and nature, than what we’re seeing now on The CW. They shot the pilot for Showtime as a 30 minute episodic, but it was ordered up by The CW as an hour. It’s interesting, because you can somewhat feel the vibe in viewing the show…there’s some naughtiness. It’s not to say it’d have been over-the-top like HBO’s Girls, but we can guess there would have been more of an edge. Rachel and her writing team are still pushing the boundaries. It’d have been interesting to see the Showtime version.

1. Rachel Bloom Is One Impressive Talent

Did you know: Rachel Bloom created, writes and stars in the show? Did you know that she also writes–with her team–the musical content for the show? Did you know that she’s not even 30 years old? Did you know that she has also written for Robot Chicken and Allen Gregory? Do you remember the girl from a few years back who went viral for having a strange obsession with Ray Bradbury? Also Rachel. Do you now wonder what you’re doing with your own life? Seriously, this gal deserves serious props for the risks she’s taking with Crazy Ex-Girlfriend. In some strange way, it seems a meld of styles–sketch and traditional TV sitcom–and that is a task in and of itself. We can’t predict the popularity of the show, and the early ratings have been soft, but there’s something about Rachel that deserves respect and requires attention.

Eddy Chen/Courtesy of the CW