Things You Might Not Know About ‘The Breakfast Club’ 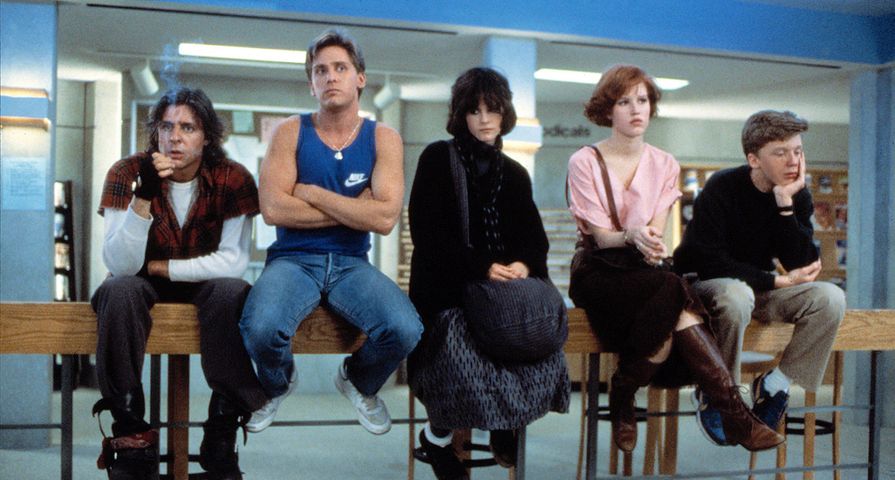 It’s been over 30 years since the film The Breakfast Club was released in theaters. The film tells the iconic story of five high school students who despite their differences must spend their entire Saturday together in detention. The group consists of all the stereotypical genres of teenagers: a popular princess, a jock, a rebel, an outcast and a nerd — in the end they all learn each other’s story and realize there’s much more to one another than their image. The film, which was almost called “The Lunch Bunch” and “Library Revolution,” was written, produced and directed by John Hughes and is considered his best work and one of the greatest high school films of all time! It’s been a long time since the movie was first released, but there’s still lots to know about what happened behind the scenes. Here’s a look at some things you probably didn’t know about The Breakfast Club:

15. A Parting Gift for the Cast

When the cast and crew were finished filming The Breakfast Club, the director John Hughes let each of the main actors take home a piece of the library’s banister as a souvenir. 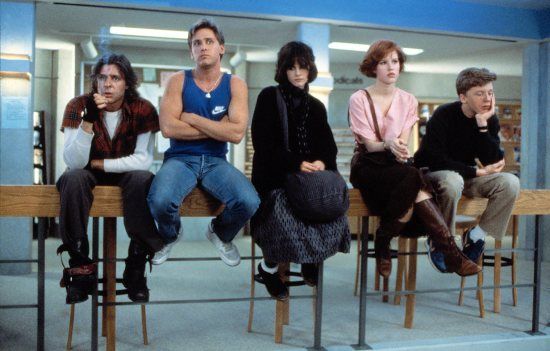 When the film was first written, which only took John Hughes two days to write, he wanted it to be the launching point for many sequel spin-offs. At one point he wanted there to be a Breakfast Club sequel every 10 years which would follow up on each of the characters later on in their lives. 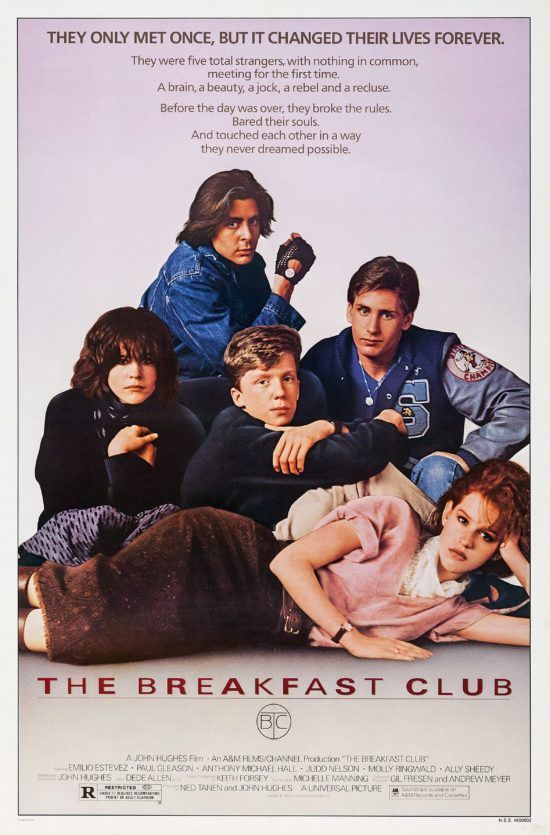 Ally Sheedy, who played ‘the basket case’ also known as Allison in the film, doesn’t speak for the first 33 minutes of the film! The film is 1 hour and 37 minutes. 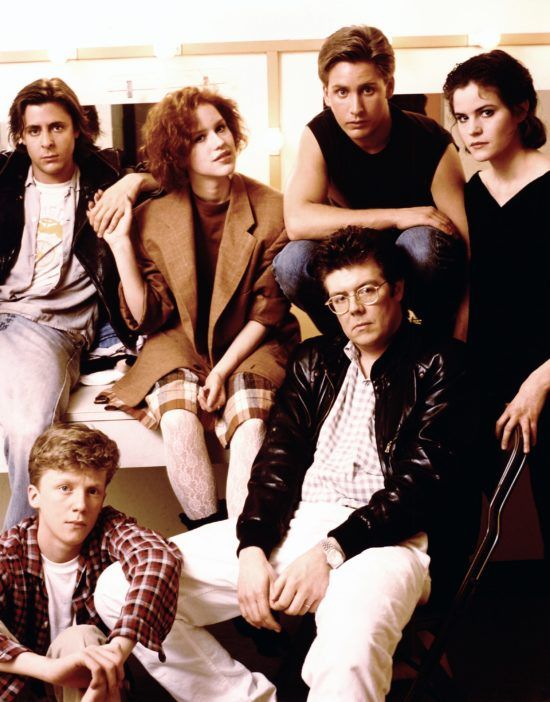 When John Bender is walking along the ceiling trying to move from his isolated detention back to the library he is talking to himself telling a joke that goes, “A naked blonde walks into a bar, with a poodle under one arm and a two-foot salami under the other…” Many viewers might still be wondering where the joke was headed, but the joke has no punch line because the ending of the joke was never written.

11. Smoking in the Library

The pot they all smoke in the film was rumored to be oregano, but in a later interview, Ringwald said she remembered it to be tobacco. Allison isn’t in that scene because she was originally filmed alone in another room singing a Capella to herself. In the proposed scene she sat in another room, sang the song and then walked out to join the rest of the group. Ally Sheedy, who played the role of Allison Reynolds in the film, said they shot the scene twice, but in the end, it got cut from the film because everyone thought it was “too weird.” 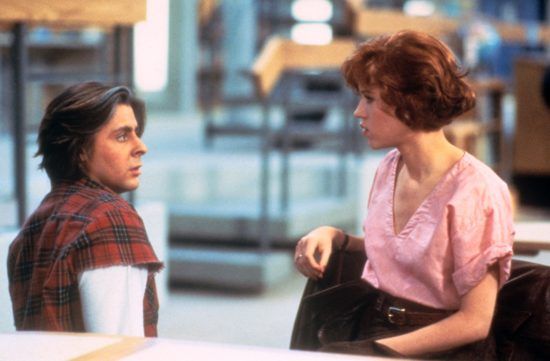 One of the best things about The Breakfast Club was that most of the actors featured in the movie were fairly unknown, so it was kind of a launching pad for their careers, especially Judd Nelson. In the same year that The Breakfast Club hit theaters, Judd Nelson, Emilio Estevez, and Ally Sheedy starred in St. Elmo’s Fire. These three became apart of the term ‘brat pack’ which is a nickname given to a group young actors who appeared together on multiple occasions for teen-oriented films in the ’80s. This group also includes Rob Lowe, Andrew McCarthy, Demi Moore, and Molly Ringwald. 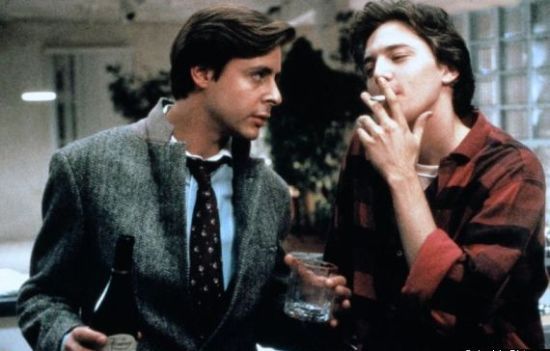 According to the casting director, Jackie Burch, Estevez had that great all-American vibe for the role of the jock, Andrew Clark, but she didn’t think audiences would buy the idea of him being a football star because, even though he had broad shoulders, he was extremely short, so she convinced the director to rewrite him as a wrestler. 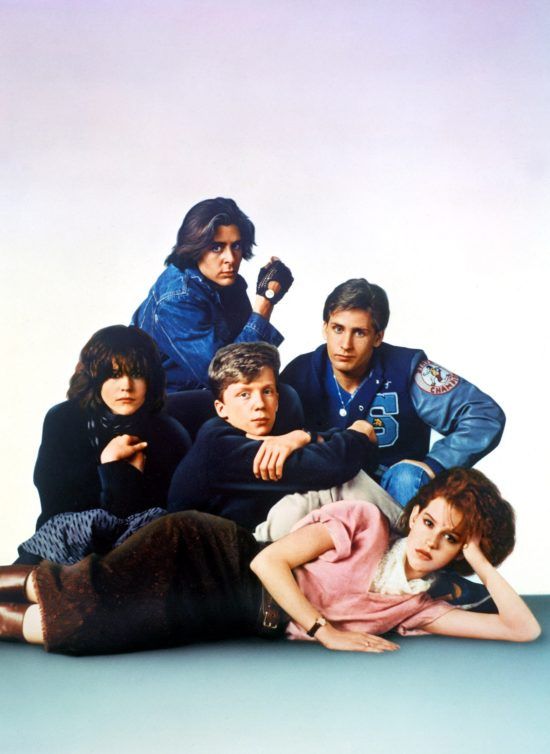 For much of the ’80s, Molly Ringwald was John Hughes’ muse which meant she wielded a lot of influence over him and he very much respected her opinion on and off-set. It was common knowledge that she was always in his ear and could easily get what she wanted on set. However, there was one big thing she wanted during the filming of The Breakfast Club that she didn’t get which was the character of Allison. In an interview with the Huffington Post, casting director Jackie Burch said: “Halfway through, Molly wanted Ally’s role. And I told John, ‘No, that is the biggest mistake!’ He finally didn’t do it and thank God! I think it would have ruined the movie. I thought that was ridiculous.” It was also reported that Molly didn’t want Claire (who was originally written as ‘Cathy’) to be a spoiled ‘daddy’s girl’ and she wanted to play someone more sophisticated so the character’s look was updated, but still personified money. Her entire outfit in the film was purchased from Ralph Lauren. 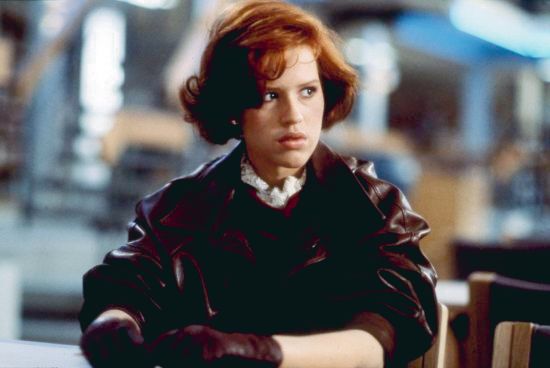 The director, John Hughes, makes a cameo appearance in the film at the very end as Brian’s dad. Also, Anthony Michael Hall’s mother, Mercedes Hall, appeared as his character’s mother at the beginning of the film when she drops him off at school. 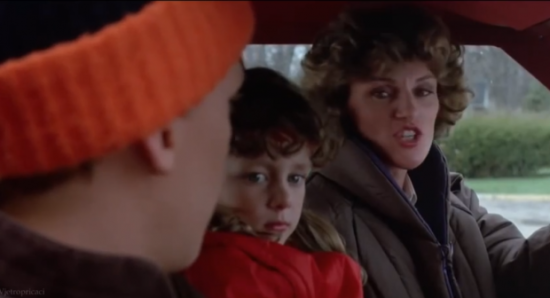 The entire film was shot in a closed set so it required a lot of lighting which created a lot of heat. In an interview with the director of photography, Tom Del Ruth said the upstairs portion of the library would get so hot it was sometimes 95 or 110 degrees! As a result, cast members would fall asleep in between takes and frequently start snoring. Ruth said, “We had to have the assistant directors go wake them up in the middle of the shots. We had to hire two additional assistant directors to just work the second floor and keep the crew awake so they wouldn’t snore and ruin the sound takes.” 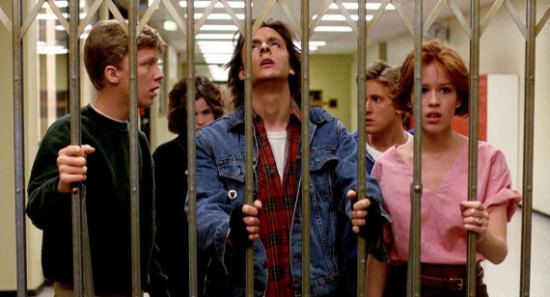 There’s been a lot of speculation about the scene where Allison does a drawing in the library then scratches her head and uses her dandruff as falling snow. People have wondered if it was real and some have said they used Parmesan cheese to pull it off. However, Ally Sheedy, the actress who played Allison, told Huffington Post that she doesn’t know who drew the picture and that the dandruff she scratched out of her hair wasn’t real or cheese, but rather it was “potatoes flakes of some kind.” 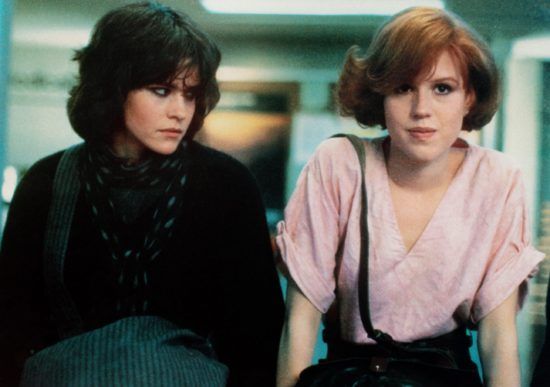 4. Scenes That Were Ad Libbed

It’s common knowledge that a lot of scenes in The Breakfast Club were ad-libbed like when the students are all sitting in a circle sharing their personal stories. Another one is when Carl (played by John Kapelos) catches Principal Richard Vernon (Paul Gleason) going through confidential files. Kapelos said that right before they shot that scene, John Hughes told him to “cut him off and ask for 50 bucks.” So he did and Paul’s reaction to it is entirely real. Kapelos said in an interview with the Huffington Post, “He was really [ticked off]. After John Hughes yelled ‘cut,’ it got a little funky for a bit. He was like, ‘Really?’ He got annoyed. But we got the take on that one.” Also, Judd Nelson ad-libbed his iconic fist pump at the end of the film.

3. Rick Moranis was Originally Cast as the Janitor

Rick Moranis was enjoying huge success after just coming off the Ghostbusters film when he was asked to appear in The Breakfast Club as the janitor. But he was quickly replaced with John Kapelos because of creative differences on set. Moranis wanted to play the character with a thick Russian accent, which wasn’t how the character was written. According to Sheedy, “he wanted to play the character as a Russian with gold teeth and keys between his legs, playing with it provocatively…and so it’s like, it wasn’t organic, I guess is putting it politely and correctly.” The character needed a more serious take and Rick Moranis wasn’t willing to change his perspective. Judd Nelson was also a last minute recast — at first, there was worry that there weren’t enough ‘big names’ in the film and Nicolas Cage was first considered for the role of Bender, but it was decided he didn’t have that ‘innate coolness’ they later found in Nelson. 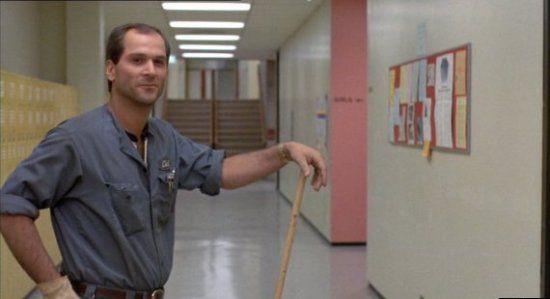 Judd Nelson played the character of the notorious rebel, John Bender. It was rumored that he was almost let go from the film because of his incessant picking on Molly Ringwald (apparently he was trying to stay in character 24/7), but it was also because they were having a hard time filming him due of his particular ‘style’ of acting. Nelson tends to move around his body a lot and castmate Ally Sheedy commented that he’s not very good at hitting marks; he’s constantly moving around making it hard to keep him within a shot. According to Sheedy, the reason Nelson stayed was because the cast pleaded with the director Hughes to keep him and tried to coach Nelson out of his acting habits. 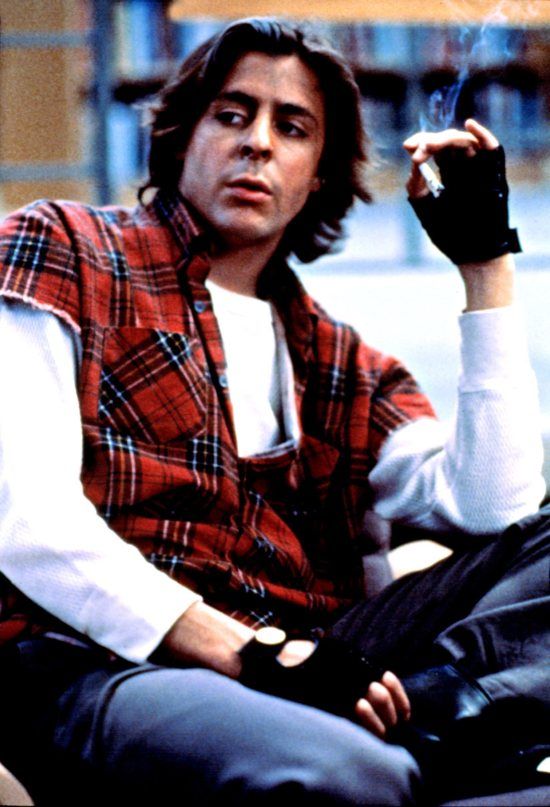 During an interview with the Huffington Post, Kapelos wanted to set the story straight on what happened between him and Emilio Estevez. The story goes, one day on set Estevez and Nelson were goofing off while Kapelos was shooting a scene and it was bothering him because they weren’t being sympathetic. In order to get the boys to stop, Kapelos said to them, “You guys would’ve been great if you were on the set of Apocalypse Now with Martin Sheen, and he goes in front of you and starts having his heart attack, and you’re not believing he’s in trouble, and he’s just wincing and moaning in pain and ripping at his chest and you guys would just sit there and let him have his heart attack, right?” What Kapelos didn’t know was that Martin Sheen is Emilio Estevez’s father. Kapelos said: “All of a sudden Emilio’s face goes white. Like, I’m telling you, expressionless and white. And everybody’s looking at me like I just shot the pope.” Hughes later told Kapelos about the connection and he said he was “flummoxed” and extremely apologetic, but Estevez never accepted his apology. 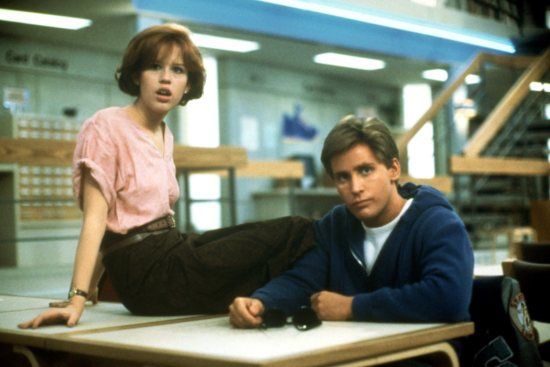